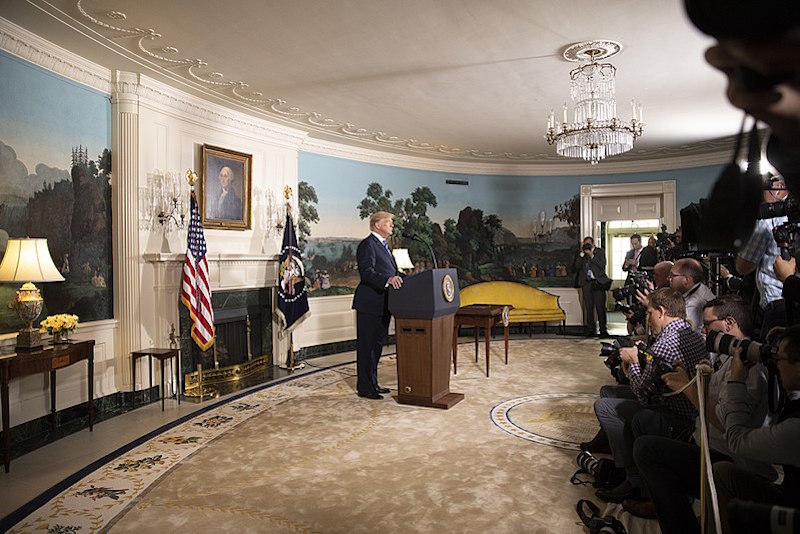 The wait is over, as President Trump announced that the United States will withdraw from the JCPoA, often referred to as the Iran Deal. The purposeful bravado of the build-up to the US Administration’s announcement on May 8th had the hallmark theatrics of the reality star turned President. The “will he or won’t he”, plagued America’s allies for weeks, with rampant speculation in the media about the future of the agreement. The American administration’s decision to leave the deal does not come as a shock, but has dealt a blow to its allies nonetheless.

In his statement the President lashed out at the Iranian regime, and pledged that the American Administration will no longer make “false promises”. This comes after a significant effort by European leaders to prevent American withdrawal from the agreement. Whilst the US Administration’s exit from the JCPoA could catapult the Middle East into heightened instability, it may also have significant fallout for the future of the Transatlantic relationship.

The question remains: can the JCPoA survive without the United States? So far, this remains unclear. However, it seems that the European Union (EU) may be the best bet on the agreement surviving. The EU’s reluctance to put pressure on the United States does not indicate that they are ready to defy the Americans on the world stage. It seems to be a question of the EU’s willingness to lead, rather than its capacity.

Despite rampant speculation, an American exit does not, in principle, mean the end of the JCPoA. As we saw with the Paris Climate Accords, an American withdrawal can actually revitalize the importance of multilateral agreements. Now that the Americans have decided to leave the Iran deal, the EU still has time to salvage the agreement. The EU has the capacity to create an EU level “blocking mechanism”, which could mitigate the impact of the American’s exit and ensure that Iran still enjoys many of the benefits of the agreement. This will be no easy task, as Europe must work quickly to assuage Iranian skepticism. The EU can, and must, show Tehran that staying in compliance with the deal will be more beneficial than no deal at all.

However, this may be easier said than done. While it was no surprise that Trump decided to pull out of the agreement, the harsh terms of the exit came as a surprise to many. In his announcement, Trump implied that the US administration will be pursuing harsh sanctions against Tehran. Rather than simply terminate American commitments to the deal, he intends to heavily sanction the Iranian regime. His stated willingness to issue secondary sanctions, targeting countries that continue do business with Iran, could heavily penalize European businesses. This move may hurt American allies, but is characteristic of Trump’s Divorce Doctrine foreign policy.

In a joint statement, leaders from the United Kingdom, France and Germany conveyed their regret with Trump exiting for the deal. However, it is important to consider that his announcement has granted them one thing: clarity. The guessing game of “What he will do next?” is over. Now the EU and the remaining partners in the agreement can take the next steps to lessen the fallout. Tehran had a well-coordinated response to Trump’s announcement, and signalled to the remaining parties that they will be patient – for a time.

During “The State of the Union” in Florence on May 11th, High Representative for the EU, Foreign Affairs and Security Policy, Federica Mogherini addressed the Iran Deal. In her speech she focused on state of the international rules based order, and the EU’s role in its future. High Representative Mogherini gave a mostly optimistic speech about what she sees as an unprecedented opportunity for the EU to take on a global leadership role.

On the Iran deal, she reiterated her comments from May 8th, and confirmed the EU’s intention to keep Iran in the deal. High Representative Mogherini, along with representatives from the United Kingdom, France and Germany, met in Brussels this week. They also met with the Foreign Minister from Iran to begin, what will be difficult, talks on the future of the JCPoA.

The future of the JCPoA is unclear. However, High Representative Mogherini has proven herself a willing and compelling advocate, not only for the future of the Iran Deal, but for the EU as a global leader. With the heavy-handed rhetoric of the US Administration, it is uncertain how this situation will develop in the coming weeks. The EU has the chance to be a leader in the rules-based international order, but it may come with a cost. If the US is willing to let European businesses become collateral damage, it could put the Transatlantic Alliance in serious jeopardy. A damaged transatlantic relationship could have significant fallout on the world stage. If Transatlantic tensions grow, it could complicate the future of NATO cohesion, and the upcoming G7 Summit. The EU has an unprecedented chance to prove itself as a global leader if they take a firm stance to save the JCPoA. What will be determined in the following weeks and months, is if they have the stomach, and the willingness, to do so.