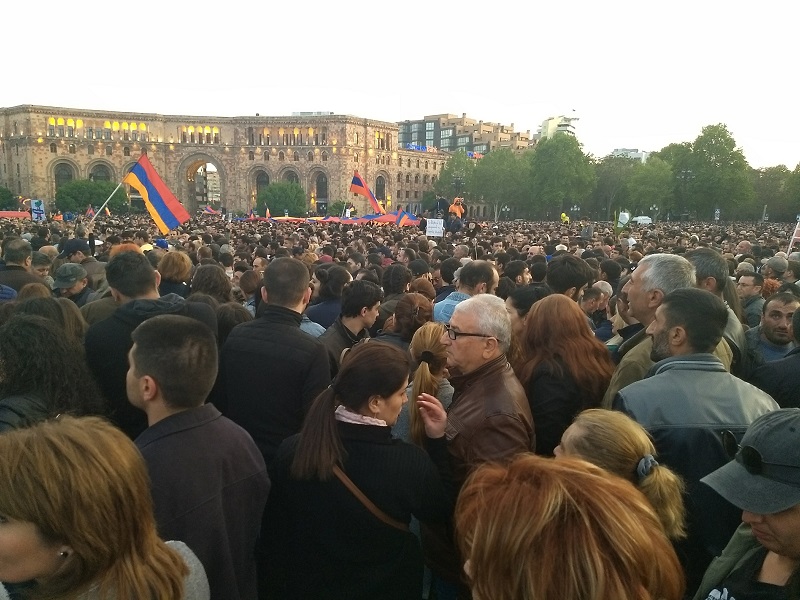 Armenia is undergoing a period of change—and while many hope this is the first step towards a more democratic system, Armenia should take care that it does not reignite a simmering conflict.

The resignation of prime minister Serzh Sargsyan on April 23 was met with jubilation. After weeks of peaceful protests that shut down the capital, Yerevan, the Prime Minister acknowledged his mistakes and stepped down. The leader of the protests and the Yelq (or Way Out) bloc, Nikol Pashinyan, has won the position.

Sargsyan’s regime was characterized by lack of access to education and interference in elections, as well as the killing of ten protestors and injuring of hundreds in clashes following his election in 2008. The 2018 protests began with Pashinyan leaving the city of Gyumri on a march to the capital, joined by thousands along the way. The movement reached its height when Sargsyan assumed the more powerful position of Prime Minister after two terms as President, with protestors blocking roads and holding mass demonstrations in the street. After Sargsyan stepped down on April 23, Pashinyan was blocked in a vote to become prime minister by the governing republican party. On a May 8 vote, however, the party allowed Pashinyan to win the premiership.

Pashinyan’s election may be a win for democracy, but time will tell if it is more than a short-term success.

The position of prime minister that he will now occupy is a new one, created due to a referendum in 2015 that changed Armenia’s presidential system to a parliamentary system. Critics said the changes would let the Prime Minister hold on to power for as long as he wished. That alone raises concerns, but the referendum was one of many votes in which the government infringed upon the democratic process. In the 2008 election that saw Sargsyan come to power, the OSCE found suspect vote-counting methods, including unlikely voter turnout figures. Election monitors found violations in the 2013 and 2017 elections as well, including vote-buying and interference by officials. In addition, although the republican party backed Pashinyan’s bid to become prime minister, it does not change the fact that the republicans hold a majority in Armenia – the reason Pashinyan lost the previous vote. This means that Pashinyan will inherit weak institutions and a deeply entrenched system of political elites.

Pashinyan promises to establish free elections, but the process of becoming a democracy can result in political turmoil, and that brings with it possible conflict. Researchers Mansfield and Snyder found that states going through the process of democratization are sixty percent more likely to go to war than states that are not. When rival groups compete for power, they are likely to use tools such as nationalism to secure support. Nationalist sentiments that result, particularly opposition to an “other”, may fuel tensions with other countries, especially if those tensions are rooted in competing claims to territory. The Nagorno-Karabakh region, also known as Artsakh, is one such sore spot for Armenia and Azerbaijan.

Nagorno-Karabakh’s population is majority Armenian, but the region is territorially part of Azerbaijan. In the 1980s, Armenians in the region alleged that Azerbaijan conducted an ethnic cleansing campaign against the community, forcefully removing Armenians from Nagorno-Karabakh and establishing Azeri settlements. Armenians called for the region to be transferred from the Azerbaijan SSR (Soviet Socialist Republic) to the Armenian SSR. War broke out in 1992 with the fall of the USSR, and though the conflict is mediated by the OSCE Minsk group, fighting still occurs.

A May 1 tweet by the mission of Armenia to the Collective Security Treaty Organization, or CSTO, published video which it claimed showed military movement along the line of contact between Artsakh and Azerbaijan. It stated that regardless of the situation in Armenia, “we will ensure the security of Artsakh with all means”.

Whether or not Pashinyan follows through on his promise to make Armenia more democratic, there is a chance that conflict over Nagorno-Karabakh will follow. Pashinyan told the BBC that while the issue of Nagorno-Karabakh should be solved through dialogue, Armenia will protect itself should Azerbaijan act provocatively. It is unclear as to what qualifies as a provocation and what that protection would entail.

If war erupts, there will be implications for more than just the two countries. Armenia has long been dependent on Russia, and with Pashinyan confirming that they will continue to be “strategic allies”, that close relationship is unlikely to end soon. Meanwhile, Turkey’s ties with Azerbaijan may strain relations with Armenia and Russia. As Azerbaijan and Armenia are both NATO partners, NATO will likely pressure both sides to negotiate peace.

As Armenia enters a time of uncertainty, it must be careful not to slip into a conflict that could divide the Caucasus and compromise world security.