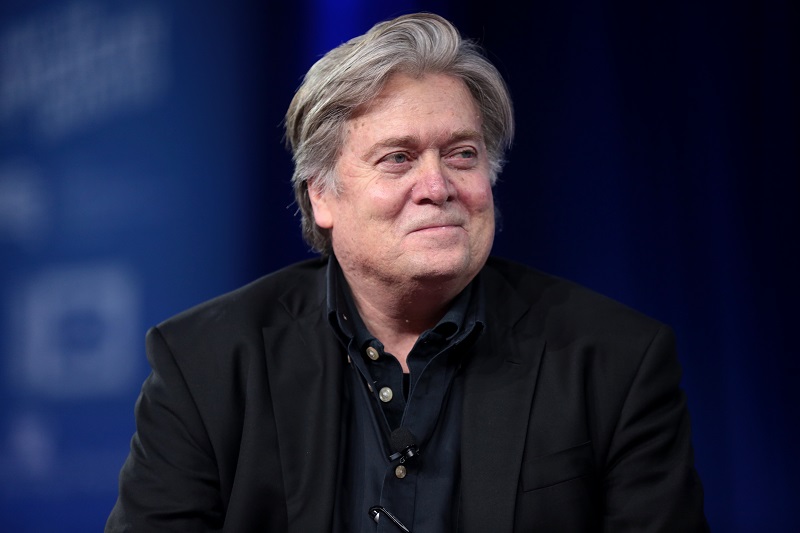 This is the second part of an ongoing, occasional series on the alt-right in power. See Part 1 for Steve Bannon’s thoughts on secularization and globalization in the West.

On April 5, Donald Trump’s powerful Chief Strategist Steve Bannon was removed from his controversial seat on the National Security Council. Derisively labelled “President Bannon” by social media users for his outsized nationalist influence on Trump’s policies, the alt-right media boss and his fellow nationalist allies in the White House are now consigned to the corner of Trump’s war room during the recent largely symbolic strike on a Syrian air base.

Although the balance of power in the Trump administration has shifted heavily towards the more moderate faction led by Jared Kushner (Trump’s son-in-law), it would be a mistake to discount the importance of Bannon’s influence inside and outside the White House. Speculations about his impending resignation, however, are proving somewhat premature, and Bannon’s articulation of nationalism has slowly become a credible ideological faction within the Republican Party. This article will continue from a previous article published by the NAOC about some of Steve Bannon’s grievances against the American establishment, to further explicate Bannon’s nationalist ideology.

However serious the current economic crisis is for American cohesiveness, it is only a malaise preluding the real crisis that will sweep away it all. Bannon is not warning about a future conflict; the war has already started. By losing its Judeo-Christian moral compass, the West has exposed itself to a number of enemies engaged in a global clash of civilizations, and it is losing.

Militarism is such a thorough part of Bannon’s lenses that his former colleagues have all noted his excessive usage of military and war metaphors in everyday conversation. By all accounts, Bannon seems predisposed to perpetually understanding the world through dialectic conflict. Given that the past Fourth Turnings included the American Civil War and World War II, Bannon sees this worldwide conflagration as inevitable and imminent. His numerous unsuccessful attempts to try to coax historian David Kaiser “to say we could expect a conflict at least as big as the Second World War in the near or medium term” ominously suggests that he will try everything to fit stovepipe facts into his worldview.

One candidate for Bannon’s great global conflagration may be China. Bannon proclaimed in March 2016 that because of Chinese expansion in the South China Sea, “We’re going to war in the South China Sea in five to 10 years. There’s no doubt about that.” While this observation clearly echoes political scientist Graham Allison’s warning about the Thucydides Trap between rising and declining superpowers, Bannon takes what is meant to be a warning about the importance of diplomatic prudence and misconstrues it as an unavoidable great powers clash.

His bluster about other superpowers, Bannon is clear about who he considers the prime enemy of the West: Islam. In his notorious 2014 Vatican speech, Bannon argued that “we are in an outright war against jihadist Islamic fascism. And this war is, I think, metastasizing far quicker than governments can handle it.” Indeed, Bannon’s fervent belief in the need to wage war against Islam spooked even the Danish cartoonist responsible for the 2005 Prophet Mohammed cartoon controversy, who reported that “Bannon is of the belief that, if Europe is to be saved, there is no way to avoid armed conflict. The power of Islam cannot be stopped by peaceful means. In short, Bannon told me in no uncertain terms that the West is at war with Islam.” During the Vatican speech’s Q&A session, Bannon cited the Battle of Vienna (in 1683) and the Battle of Tours (in 732) as examples of Judeo-Christianity “[keeping Islam] out of the world…”, in which Christian European armies drove back Muslim armies. The leader of French forces in the latter battle, Charles Martel, is sometimes valorized by white nationalists as a symbol of white European resistance against Islam and non-Europeans.

As a result of the West’s secularism and cronyism, the West is sapped of the will to win against Islam, making the West vulnerable to being overrun. As Bannon wrote in his draft screenplay for his unproduced anti-Islam documentary, “Destroying the Great Satan: The Rise of Islamic Facism [sic] in America”: “The road to the establishment of an Islamic Republic in the United States starts slowly and subtly with the loss of the will to win. The road to this unique hell on earth is paved with the best intentions from our major institutions.”

Located in the home front, these institutions undermine Western civilization and the organic American nation in particular. As the screenplay further elaborates, in addition to Muslim “front groups and disingenuous Muslim Americans who preach reconciliation and dialogue in the open but, behind the scenes, advocate hatred and contempt for the West”, Bannon lists a number of American institutions as “enablers” for Islamic jihadism’s infiltration of America, including major media outlets, the national security establishment, executive institutions, and even the “American Jewish Community.”

These groups make the West vulnerable to onslaughts of Middle Eastern and African refugees and migrants fleeing into Europe. Bannon often compares the ongoing European immigration crisis to a 1973 French novel by far-right author Jean Raspail, The Camp of the Saints. The novel portrays a horde of “thousands of wretched creatures” (non-white immigrants) flooding an impotent Europe and overthrowing white society, spurring a doomed white nationalist uprising.

Such racial overtones extend to areas of American economic and national security interests as well. In an interview with Trump, he argued that Asian CEOs working in Silicon Valley and foreign students graduating in American universities are a threat to American “civic community”, because “A country is more than an economy.” This statement alone positioned him to the right of even Trump.

It is important to note that in all likelihood, Bannon is no white nationalist—at least not in the commonly understood sense of skinheads and Hitler worshippers. Notwithstanding Bannon’s rather glaring casual prejudice, even former coworkers-turned-critics defend Bannon against charges of overt racism and anti-Semitism, at least on a personal level. Rather, Bannon’s focus appears to be to reassert the cultural legitimacy and centrality of white middle class people of European descent. An opportunist, Bannon is said to have no qualms about pandering to actual white nationalists for readership and support in order to advance his main goal of realigning America away from a blindly economic mindset towards a reassertion of that broader, less tangible “civic community.”

And it is for the defence of this civic community that Bannon will turn his sights on the neoliberal globalization elites.

To be continued in Part 3 of this series, on Bannon’s crusade against the forces of globalization.