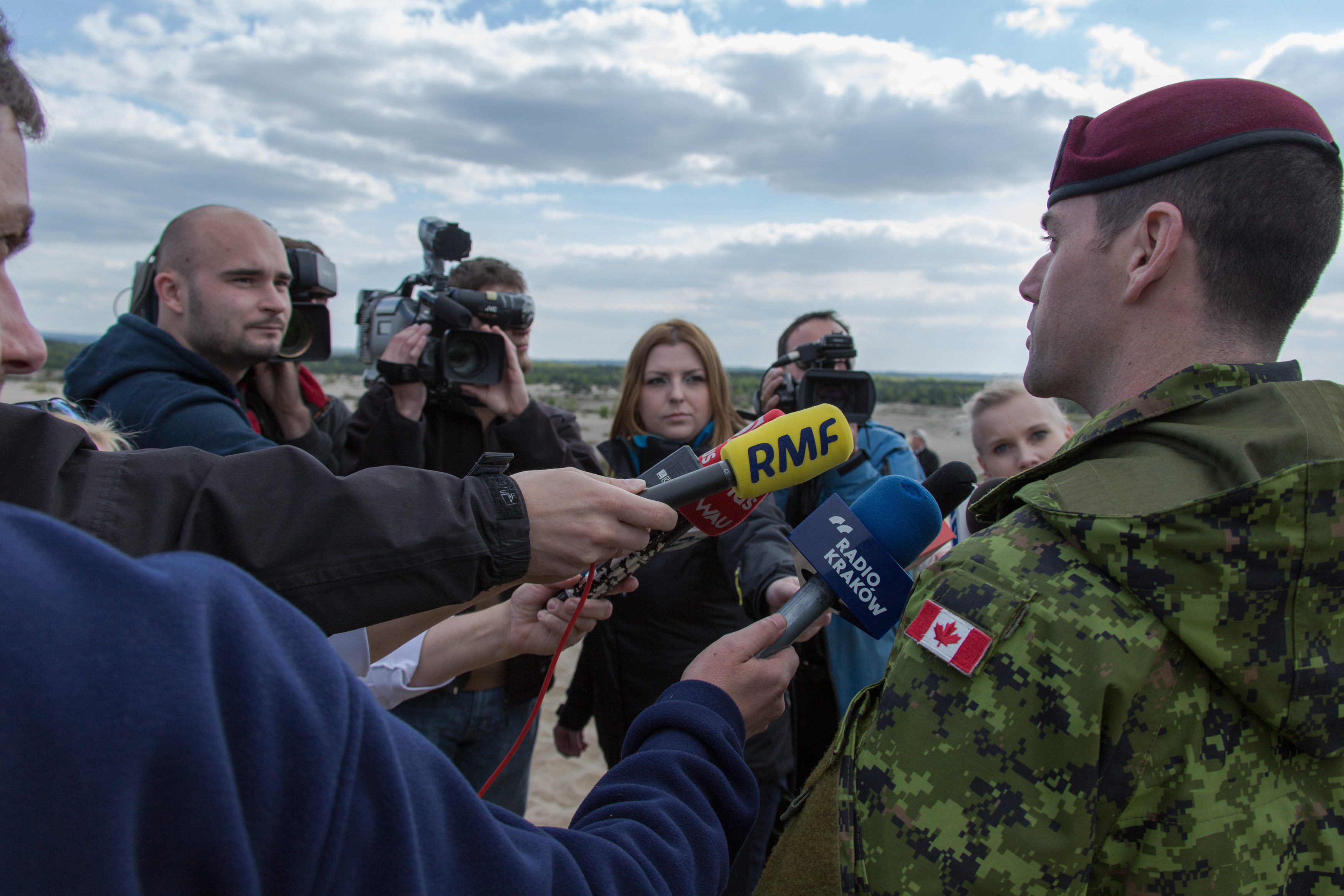 The press is a powerful force, especially in times of conflict. It can be the eyes of the public, connecting them to the front lines. It is also the mouthpiece of authorities, transmitting specific messages to its own nation, as well as the civilians and insurgents in conflict zones. Unregulated media has proven disastrous for militaries, damaging public support for military action and jeopardizing personnel security. Adversely, media without any freedom is hazardous to civil liberties, allowing populations to be easily manipulated. The appropriate level of information control, particularly in various security and political contexts, is a question without an easy answer.

An earlier article explored the relevance of information flow in times of conflict. An examination of the Department of National Defence (DND) public affairs policies reveals a trend of increased management over public information. These policies include ceasing public briefings on military activities and a new plan to increase strategic information leaks to selected journalists. Chief of the Defence Staff General Jonathan Vance and other senior officers have labelled this the “weaponization of public affairs”.

According to several journalists, media relations with DND have become more tightly controlled as of late.  Marie-Danielle Smith, who reports regularly on Canadian politics, says that increased involvement from the Privy Council Office (PCO) in DND affairs has been a significant factor.

The PCO is part of the executive branch of government. Its staff, who are public servants, provide policy advice and guidance to the Prime Minister, the government, and Public Service. The Office has set the Public Affairs Guidelines that govern the activity of all government departments during the electoral period. Smith states that, in addition to creating lengthy delays in responses, the involvement of the PCO contributes to the ‘micromanagement’ of information by senior government officials. Journalist reporter Amanda Connolly adds that in many cases, information is not produced at all. She writes “we’re increasingly seeing cases where information is withheld because it could be ‘injurious to national security.”

When the government restricts the information flow on military affairs, it can be interpreted in different ways. For members of the media, it can be a red flag; a warning sign that the information which is most important is what is not being told.  For military officials, it is strategically advantageous.  It allows them to operate without pressure from non-expert members of the public, and without fear that secure information will get into the wrong hands.

Undeniably, DND is making changes to its relationship with the media. Information flow naturally follows fluid guidelines. As military situations develop, and contexts change, policies, which govern dissemination must follow suit. In an age of instant communication, information that is not carefully controlled can become a liability. With members of the public, and members of enemy forces equally able to view details of conflict development, the appropriate caution is a strategic necessity.

Dr. David Bercuson, influential political historian and director of the Centre of Military Strategy at the University of Calgary, argues that compared to practices in recent history, current policy may not be so drastic. In 1999, under the direction of Jean Chrétien, Canada sent forces to contribute to NATO engagement in Kosovo. During the armed conflict, information operations were also heavily controlled. CAF Second Lieutenant Jessica M. Davis writes that critical reporting was effectively curtailed by senior commanders. Restrictions on media coverage, also necessary due to ‘security concerns’, created a barrier between the public and the CAF, leaving Canadians mostly in the dark on their military’s activities abroad.

When militaries are involved in armed conflict, particularly against aggressors with sophisticated media tactics, information operations are carefully crafted. Kosovo, and now Iraq, are not the first cases of officials manipulating information flow, and they most likely will not be the last.

Precedence, however, does not necessarily equate with justification. As Bercuson goes on to say, ‘the government is the one to define security risks’. Security reasons can therefore be cited when there is any change to public affairs policy. With one organization able to define what constitutes public risk, and the consequent response, there is always concern that oversight is not appropriately applied.

The CAF has recognized the importance of external accountability. An extra layer of civilian oversight of the Canadian military was officially established in 1998, through the Office of the Ombudsman. As the public learned about cases of sexual assault, and the ‘murderous events’ of the Somalia Affair, it became clear that the CAF’s systems of accountability at the time were ineffective. This led to a system where grievances could be taken to a panel outside of the chain of command, and civilians, through parliamentary procedure, would be able to offer guidance on CAF policies.  However, the Office of the Ombusdman does not report directly to parliament, it reports to the Minister of National Defense. This means that accountability over the CAF, and control over military information flow, comes from the Executive, and not the Legislative branch of government.

It is the level of ministerial accountability, which concerns journalists like Murray Brewster. According to him, the Public Affairs Guidelines in place during the election are a result of the government’s immoderate interpretation of the Caretaker Convention.

Under the caretaker convention, a government restricts its actions during the electoral period, this includes technical briefings from government departments. The PCO has set parameters on these restrictions. These include exceptions for activity which is ‘urgent and in the public interest’. Brewster argues that there is a high level of public interest in the war, stating ‘when blood is being shed, we want to know what is being done in our name’.  As no technical briefings on the war in Iraq have been held since July, those in power do not evidently hold a similar sense of urgency.

Just as the government determines which information must be withheld for security purposes, it also determines what must be shared in the name of ‘public interest’. Public interest is not always a concrete concept, and the methodology for serving the Canadian population tends to vary across individuals and institutions.

The press serves the public by providing information. However, their perceived relevancy has an impact on media outlets. Without an invested audience, their ability to conduct costly and time-intensive investigations is limited. This creates a need for outlets to constantly produce information that will incite interest. The military serves the public by protecting them from external threats. This involves maintaining good standing in the eyes of the public, and performing security operations without interference. Military public affairs officers are therefore invested in circulating stories on CAF accomplishments, and detracting focus from operations which may be unpopular. With these different agendas, both parties may tend to produce either overly critical or overly favourable reports.

Regardless of their opinions on public interest, the government, the media, and the military are all institutionally mandated to serve the population. Under ideal conditions, these oppositional views manifest in what David Bercuson describes as a ‘creative democratic battle between military and press’. In less than ideal conditions, the battle is not a fair fight. According to Brewster, there may be an ‘inability to challenge information’, meaning that truth may become lost in strategy.

Opinions vary on how well the public is being served as the military redefines its public affairs strategy. Reliably, the battle between the press and government departments will continue for some time to come. Although restrictions exist, Canada consistently holds high rankings in the World Press Freedom Index. Amanda Connolly adds, “journalists are a creative, persistent bunch. Attempts to restrict their access to information only inspire them to find new ways of accessing it”. The information, or facts, cannot be changed, it is now a matter of who will find it out, who will publish it, and who will pay attention.