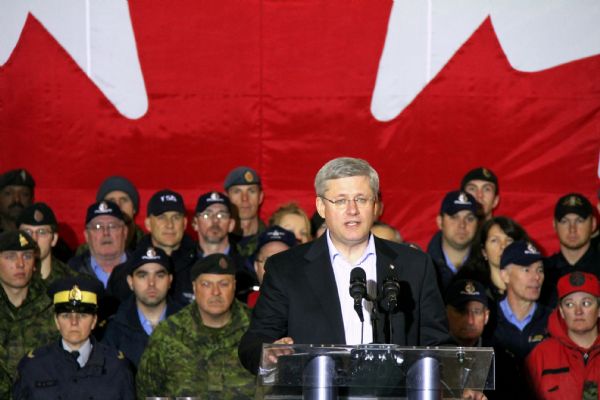 At the recent CDS change of command ceremony, Prime Minister Harper commented that the CF must, “within very real budgetary constraints” be “restructured” to reduce administrative costs and preserve front-line capabilities. His words echoed a June 15th letter, leaked to the Canadian Press, in which the PM indicated to Defence Minister Peter Mackay that proposed defence cuts were not deep enough. The PM’s comments stand in contrast to the words of new CDS General Thomas Lawson, at the same ceremony, that there is “very little fat” which can be cut. This has led some to ask whether Prime Minister Harper’s “Honeymoon” with the CF has reached its end.

The first question, therefore, is exactly that: has the Prime Minister’s strong support for a stronger military run out? The answer, quite frankly, is no. The meat of both the letter and the PM’s comments at the change of command ceremony indicate that, rather than curtailing his support for the CF, Prime Minister Harper has aligned his views with the recommendations of Lt.-General (ret’d) Andrew Leslie, expressed in the “Report on Transformation 2011.”

The report stridently advocated a ‘more teeth, less tail’ approach to transforming the CF post-Afghanistan, calling for significant re-structuring and reductions in overhead and headquarters costs, in order to preserve operational and capital investment budgets. Indeed, the Prime Minister employed those very words, “more teeth and less tail,” at the change of command ceremony, and also clearly expressed that thinking in the letter of June 15. The second question is, however: can the Leslie/Harper vision be achieved?

Some steps have already been taken, first and foremost ending the combat mission in Afghanistan in 2011, which has been estimated to incur over its course one billion dollars a year in incremental costs (costs above and beyond normal operations and maintenance) to the National Defence budget. Another important step was the consolidation of the four Commands established by former CDS Rick Hillier into two. Canada Command, Canadian Expeditionary Forces Command, and Canadian Operational Support Command were folded into the new Canadian Joint Operations Command (CJOC), stood-up on October 5; Canadian Special Operations Command was preserved intact. Also, civilian positions and pay structures have already been cut or altered in order to reduce costs.

Meanwhile, other steps are in the offing. Most importantly, as both the PM and General Lawson indicated, decreases in operations (mainly ending the training mission in Afghanistan in 2014) are expected to generate savings. Second, as John Ivison reports, work is underway, driven by the Treasury Board, to curtail the practice of public servants leaving DND (and other departments) only to turn around and return to lobby their former colleagues “on behalf of third party clients.” This move too aligns with the recommendations of the Leslie report, which found that contractors and consultants – estimated to number some 5, 000 persons – are costing DND some 2.7 billion dollars a year.

However, a number of defence experts have argued that consolidating commands, curtailing operations, and cutting administrative costs and contracting will not be enough to achieve the called for spending reductions, and that meeting targets will necessitate the cutting of some operational capabilities and readiness.

Steve Saideman notes General Lawson’s comments that there is “very little fat” to cut arguing that in order to achieve specified cost reductions the CF will have to cut “meat” (capabilities) as well. Saideman points out that modern weapons systems in general – not only the F-35 – are more costly than in the past, and that the added costs cannot be covered by consolidation. Even establishing CJOC will not necessarily reduce overall costs. Although more than 100 personnel will be cut from the command structure, most will be shifted to field assignments or to staff new capabilities such as space and cyber-warfare. As a result, Saideman argues, the government and CF face a choice: either invest seriously in modernizing capabilities (for example, Canada’s submarine fleet), or cut some entirely.

Meanwhile some analysts, such as Philippe Lagassé, argue that cutting ‘overhead’ in some cases amounts to cutting capability: “The programs they have in place exist for a reason. They’re not all fat… You will eventually need those very things you’re being asked to cut.” If this is the case, another question must be answered: what is to be cut?

In an earlier posting, I argued that as the Afghanistan mission winds down the Conservative government has begun to shift its defence policy away from international engagements and toward a focus on domestic and continental issues and operations. Mounting evidence – Harper’s ceremonial comments and the leaked letter included – now indicates that reductions apart from overhead will be guided by this re-orientation.

Both in the letter and at the change of command ceremony, the Prime Minister explicitly emphasized the protection of national sovereignty and other domestic/continental operations, while overseas deployments were discussed mainly in the context of cost-savings as they are scaled down or ended.

Although less directly, the consolidation of the CF command structure to form CJOC is a further illustration of the policy shift. The multi-command system devised by CDS Hillier was explicitly designed to enable a greater role on the world stage, at the time centred on the mission in Afghanistan; its re-structuring indicates movement away from that mindset.

More concretely, reports indicate that an analysis written by David Perry for the Centre for Security and Defence Studies (not freely available but discussed here, here, and here) found that defence spending will be reduced by 11% (some $2.5bn) by 2014. Due to Harper’s restrictions on cutting front-line capabilities, readiness will inevitably take a hit. In particular the National Procurement budget, which includes spare parts, maintenance, and ammunition for training will be impacted. The report also indicates that, as a result of the cuts, the potential for expeditionary operations in the near future is greatly reduced, despite DND statements to the contrary.

Neither the shift nor the cuts should be surprising. In many ways this marks a return to the principles of the Canada First Defence Strategy, which quite explicitly places domestic and continental priorities such as sovereignty protection at the forefront. Moreover, as Perry notes, in a time of fiscal constraint, any government would do much the same with the large, discretionary defence budget. That does not mean, however, that the choices are easy ones to make.