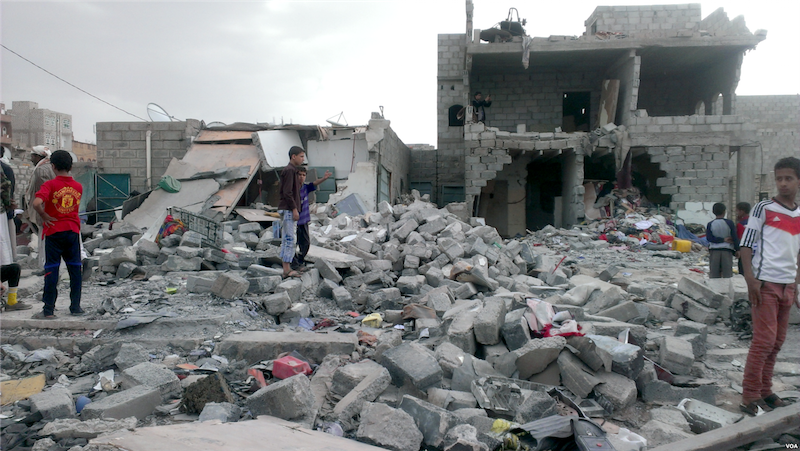 Images of hollowed faces, sunken eyes, and skeletal bodies indicate the severity of Yemen’s violent conflict that has been underway since 2015 between Saudi Arabia’s Western-backed coalition and the Iranian-supported Houthi rebels. The conflict is also interspersed with attacks by terrorist organizations such as ISIS and al-Qaeda in the Arabian Peninsula (AQAP) looking to take advantage of the chaos to find new recruits.

Human rights violations abound as millions of civilians have been left without sufficient protection, and lack access to basic essential services including healthcare and education. Food insecure civilians have resorted to consuming garbage due to Saudi naval blockades stopping food imports. External humanitarian aid assistance has also been limited. The ongoing conflict makes it difficult for food, fuel, and medical supplies to reach certain areas with reports of Houthi rebels preventing aid workers from delivering food, water, fuel, and medicine, and Saudi Arabia asking personnel to leave targeted areas. According to a report produced by the UN Office for the Coordination of Humanitarian Affairs in November, 2016, approximately 18.8 million people are in need with 10.3 million people in acute need. The humanitarian crisis has reached a critical point and despite international outcry, Yemen continues to lack proper assistance from outside countries and public attention remains glued to the crisis in Syria.

In particular, Saudi Arabia’s supporters in the West including Canada, Germany, the UK, and the US, among others, have drawn international criticism for appearing more focused on aiding a major Arab ally’s unlawful attacks and pushing counterterrorism efforts than they are in aiding the humanitarian crisis, even as they denounce the horrors of Syria. Instead, they have been responsible for supplying arms, intelligence, and refuelling to Saudi Arabia; for example in 2014, Canada signed a 15-year deal worth CAD $15bn for weaponized military vehicles. From 2015 to early 2016, German defence exports increased significantly with Qatar, part of the Saudi-led coalition, being a major client. Since March, 2015, the UK has licensed over £3.5bn worth of military weapons and last year alone, the US supplied USD $5.4bn worth of air-defence missiles, USD $1.29bn worth of smart and general purpose bombs, and USD $500m for ammunition.

All of this support has indirectly led to the killing of civilians with Saudi Arabia being known to launch indiscriminate airstrikes. In 2015, attacks included an internally displaced persons camp near the Yemen-Saudi border killing at least 29, a village market in Muthlith Ahim killing at least 65, and an airstrike on a market in Zabid killing 60. In March, 2016, approximately 107 civilians were killed in a double strike on a market in Mastaba while October, 2016, saw the double airstrike of a funeral gathering in the capital Sana’a, killing 140 people and leaving hundreds injured. These attacks constitute violations of international humanitarian law which prohibits disproportionate, indiscriminate attacks on civilians and civilian-populated areas such as hospitals, schools, and marketplaces where loss of life and infrastructure overshadows military benefits. Any breach of these laws amounts to war crimes.

In August, 2016, the UN High Commissioner for Human Rights, Zeid Ra’ad Al Hussein, reiterated the call made in an October, 2015, UN Human Rights Council (UNHRC) report to launch an investigation into the conflict’s human rights abuses. However, states have appeared non-responsive. The UK has failed to conduct comprehensive investigations into breaches of international humanitarian law and deferred the responsibility to Saudi Arabia, blocked international investigative inquiries into war crime claims by the EU and UNHRC, and ignored internal parliamentary calls to suspend arms sales. Despite the US’ claim that ‘U.S. security cooperation with Saudi Arabia is not a blank check’, proposing cutbacks to intelligence-sharing and a suspension on certain arms sales after the funeral airstrike, there are still plans to sell $3.51bn worth of equipment, refocused training, and support purported to help with border defences and choosing better targets. Indeed, the funeral attack was initially met with denial by the coalition before a follow-up announcement was made that the coalition, supported by the UK and US, would inquire further into the attack despite previous failures to conduct its own unbiased, transparent investigations, provide help to victims, or consider prosecutions for war crimes.

State complicity in aiding and abetting war crimes by supplying intelligence and arms, and lack of outright condemnation towards the use of unlawful civilian targeting in the Yemen conflict has further implications for involved NATO members. The commitment to maintaining security seems far outweighed by the possibility of striking lucrative arms trade agreements designed to bolster economic prosperity for Western states and further solidify allied relationships with Saudi Arabia (which already wavered previously with the ease of nuclear-related sanctions on Iran). Even in the absence of formal tribunals and courts, states should not be able to act with impunity otherwise it risks setting a precedent for other states to follow suit and can only leave a larger trail of victims. Instead, NATO members and the wider international community should strive to play a more humanitarian and peace making role if the security of all is really to be prioritized.

Photo: Months after an airstrike on a neighbourhood populated by black Yemenis, or ‘Muhamasheen,’ more than a hundred buildings still remain in rubble and survivors continue to search for any valuables, Sana’a, Yemen (2015), by Almigdad Mojalli via Voice of America (VOA). Listed under Public Domain.