This week marks the 20th anniversary of the Rwandan genocide, in which 800,000 Rwandans were killed in 100 days. As the international community commemorates its dramatic failure to prevent mass atrocities in Rwanda, many commentators have drawn parallels between the Rwandan genocide and the unfolding genocide in the Central African Republic (CAR). The situation in the CAR has gravely deteriorated since the Muslim Seleka rebels took control of the country last year. The attacks of militiamen on Christian civilians catalyzed the formation of Christian Anti-Balaka militias that have begun to viciously target the CAR’s Muslim minority. Though 2,000 French troops and 6,000 AU troops are currently on the ground, they have been unable to contain the violence. On April 10, the UN Security Council passed a resolution authorizing the deployment of 12,000 peacekeepers to the CAR.

In Canada, leading academics, political figures, human rights advocates, and media outlets have called for more robust Canadian engagement in the CAR. Liberal MP Kirsty Duncan’s advocacy triggered a four-hour debate in Parliament on the CAR. Likewise, Romeo Dallaire has called on Canada to contribute troops to the peacekeeping force, arguing that its unwillingness to do so reflects a basic indifference to African problems. Eminent scholar Robert Rotberg argued that intervention is Canada’s moral duty and a wise move given our past engagement in the CAR, our ready military capability, and our Francophone heritage. Just this week, the Globe and Mail Editors called for Canada to contribute to the UN force.

However, the Canadian government has shown no enthusiasm to make any military contribution to the CAR. Certainly, Foreign Minister John Baird has labeled the international community’s efforts “inadequate” and “lacking” in resolve. At the same time, his office refused to say if the government was considering sending troops. 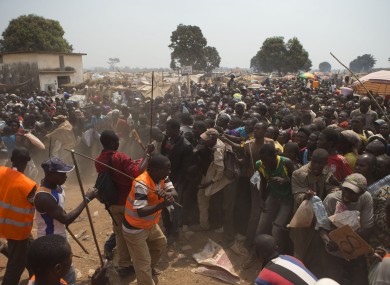 The government’s reluctance is not without foundation. The Canadian Forces are still recovering from the just-completed grueling Afghan mission.  Likewise, the government is likely unsure of how public opinion would respond to the CAR mission given its noted skepticism of the Afghan war. Also, Canada’s last major intervention in central Africa was a notable failure. Arising out of Prime Minister Chrétien’s personal concern to protect refugees in the Democratic Republic of the Congo, the hastily-launched 1996 intervention was never fully implemented and merely highlighted Canada’s lack of expertise in the region and deficits in key military capabilities.

At the same time, by Baird’s own words, Canada’s contribution falls short. Canada has given $11.9 million in humanitarian aid, but this will not protect Muslim civilians from atrocities at the hands of the Anti-Balaka. Focusing on humanitarian aid without corresponding efforts to improve the security situation risks producing a repeat of the well-fed dead phenomenon experienced during the Bosnian War in the 1990s, in which civilians were given ample humanitarian aid but left defenseless against the depredations of militia groups.

Canada could contribute troops to the peacekeeping force with a reasonable expectation of both public support and military success. For instance, NDP foreign affairs critic Paul Dewar called on Canada to contribute peacekeepers, as have Duncan and other Liberals. Moreover, as defence scholar Walter Dorn writes, Canadian public opinion has generally shown strong support for peacekeeping missions. Nor would the CAR be a high-risk environment compared to Afghanistan. Indeed, France has only suffered two deaths since intervening in December. The Anti-Balaka are poorly-armed; mainly reliant on machetes and makeshift light weapons, and have not yet utilized improvised explosive devices.

Even if the government believes that the CF is in no position to put boots on the ground, Canada can still make a strong contribution without boots on the ground. The CF could contribute strategic airlift to the coalition, just as it did to assist the French-led intervention in Mali last year. Likewise, Canada could supply vehicles to the force, as Paul Martin’s government did in 2005 by supplying armoured personnel carriers to the Darfur peacekeeping mission. Even basic logistical and communications support would be useful, and could fill key deficits among the African military contingents in the peacekeeping mission.

Even on national interest grounds, there is a compelling case for Canadian involvement in the CAR. Admittedly, Canada has few economic and political interests in the CAR, and Canada-CAR trade is minimal. Nevertheless, greater engagement in the CAR would bring improvements in Canada’s relations with Africa and the Francophone world, and improve its image at the UN.  As the only G7 state besides France to be a member of the Francophonie, Canada has a responsibility to show leadership if it wants to retain a privileged voice in the organization. Likewise, engagement in the CAR would improve Canada’s efforts to improve relations with Africa. Since becoming Prime Minister, Harper has substantially reduced Canada’s diplomatic, development, and security engagement with Africa, and has focused primarily on expanding commercial opportunities for Canadian exports and mining companies. Engagement in the CAR would show that Canada is willing to partner with African states on the full spectrum of issues, not just the commercial ones.

Greater engagement would also help to revitalize Canada’s reputation at the UN, where the conservative government has won a reputation for criticizing the organization from the sidelines while doing little to offer constructive solutions. The mission would further offer a chance to re-engage Canada’s leadership on the Responsibility to Protect principle, which Canada persuaded the UN to adopt in 2005 but has shown a lack of leadership on since then.

In short, Canada has both an ethical duty and compelling political reasons for greater engagement in the CAR. The government has a reasonable expectation of cross-partisan and public support for taking a stronger role in the CAR, and the mission is within the Forces’ capacities. What is needed is political will. In 2006, Harper told the troops in Afghanistan that he wanted Canada to stop “carping from the sidelines, but [take] a stand on the big issues that matter.” Now is the time for the Prime Minister to live up to those words and show that he is serious about, in his own words from 2006, “demonstrating an international leadership role for our country.”