Hilary Clinton dances with Emmie Phiri, Chair of the Lumbadzi Milk Bulking Group while stopping off in Malawi

U.S. Secretary of State Hilary Clinton travelled to nine Sub-Saharan countries during an 11-day tour of Africa, addressing the United States’ goals to ramp up its commitment to economic, security, and development initiatives in the region. Her visit could signify the strengthening of U.S.-African relations with encouraging remarks of growing partnerships for a democratic and prosperous future for the continent. For a highly observant China, however, Clinton’s words represented a thinly veiled attack on their policies and economic dealings.

At University of Cheikh Anta Diop in Senegal, where Clinton made her first stop, she proclaimed Washington’s devotion to “a model of sustainable partnership that adds value, rather than extracts it” from Africa. She claimed that unlike other countries operating on the continent, “America will stand up for democracy and universal human rights even when it might be easier or more profitable to look the other way and keep the resources flowing. Not every partner makes that choice, but we do and we will.” Her words and location were carefully chosen, as Senegal has a history of democratic governance and recently experienced a peaceful transfer of power.

Chinese state-owned media outlet Xinhua News lamented that her comments were unfair, though the Secretary of State did not explicitly name China. “Whether Clinton was ignorant of the facts on the ground or chose to disregard them, her implication that China has been extracting Africa’s wealth for itself is utterly wide of the truth,” argued an official from the news agency. Two-way trade between Africa and China surpassed a total of $120 billion last year, but critics have maintained that African infrastructure development—including the building of roads, railways, and pipelines—has primarily served Chinese extractive needs.

As Africa’s largest trade partner, China recurrently finds itself under the scrutiny of the international community for the political and social implications of its investments. While the pressure has generally emerged from Western governments, who have struggled to keep up with China in accessing African resources, local governments have increasingly moved towards adopting protectionist measures in the face of the Asian giant.

Last week the Malawian government introduced new legislation barring foreigners from carrying out trade in rural and semi-rural areas. The investment and export promotion bill will have the greatest impact on Chinese businesses, which have helped increase the country’s trade volumes by over 400% since 2010. While Malawi’s Minister of Trade, John Bande, claims the law aims to regulate foreign investment, he made little effort to mask its intended target. He stated, “We will not accept foreigners to come all the way from places like China and open small businesses and shops… and compete with local traders.” Thus far, all foreign owned businesses operating outside of four major cities have been shut down. The policy was contested, however, and deemed of a xenophobic nature by those who regard China’s presence as beneficial for the country. After all, China has invested greatly in the African consumer market, and the results continent-wide suggest mutually beneficial gains: between 2006 and 2011 sub-Saharan Africa saw a 19.3% increase in consumer expenditure in real terms.

Clinton stopped off in Malawi as part of her tour and made remarks that tacitly endorsed such policies. She warned her audience against unnamed “outsiders” coming to “extract the wealth of Africa for themselves, leaving nothing or very little behind.” Her message is rightly perceived as part of a larger U.S. strategy to promote a more altruistic engagement that challenges China’s involvement, which has been perceived as more nefarious. American University professor Emilio Viano speculated that Clinton’s attempt to shore up support for building democratic institutions, development goals, and promoting peace and security, are tactics to counter China’s financial grip on the continent. After all, Beijing announced its plan to provide $20 billion in new loans to Africa over the span of the next three years at last month’s China-Africa Cooperation Forum. 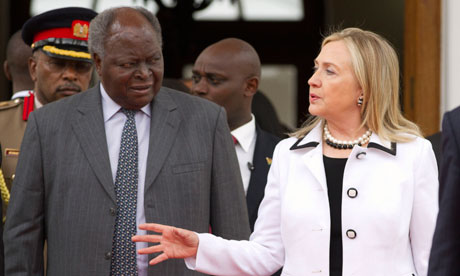 In June, Barack Obama laid out a “US Strategy toward Sub-Saharan Africa” which aims to boost trade relations that saw a sharp fall during the 2008 financial crisis. In the aftermath of the global recession, trade between the U.S. and 40 African countries decreased by more than $10 billion. The Obama government will now have to commit itself to helping large U.S. companies contend with state-owned Chinese firms. Whether the U.S. is in the position to prompt financial investment in African is certainly of question.

It is clear that Clinton’s visit and do-good rhetoric has recapitulated what the U.S. has consistently tried to sell: democracy. This implies a delineation of a more polarized approach between the U.S. and China towards the burgeoning continent. For African countries, the United States can offer support for a democratic future and provide economic assistance geared at equitable growth for average citizens. China on the other hand, has more to offer state elites financially and perhaps more to lose as anti-Chinese sentiment is fueled across the region. If more African states replicate Malawi’s protectionist policies, a rejuvenated American strategy in the region may yield the United States crucial allies to solve, as Clinton stated, “the problems we face today” through the formation of “a global network of partners.”

The Role of Mothers in Countering Violent Extremism