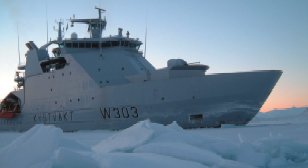 The government’s promotion of the Arctic Offshore Patrol Ships procurement has been plagued by inconsistency. The Canadian public deserves a true explanation, but with a new, secretive approach from the government, it seems unlikely that any such thing is forthcoming.

A key part of getting Canada’s National Shipbuilding Procurement Strategy (NSPS) off the ground is the construction of Arctic/Offshore Patrol Ships (A/OPS). These ships are supposed to enhance Canada’s coastal sovereignty enforcement capabilities and their construction is supposed to begin growing the skills necessary for the Irving Shipyard in Halifax, NS, to build more complex ships down the road. However, the project has become controversial and many people – journalists, academics, and others – are asking why we are buying these ships at all. Prime Minister Stephen Harper’s Conservative government has been promoting this program, as part of its strategy to re-capitalize the Canadian Forces for several years, but its reasoning has been less than consistent.

Early on, the Conservatives emphasized the need to enforce Canadian sovereignty in the North which, they argued, required a strong Canadian Forces presence on land, sea, and in the skies, rhetoric that resonated deeply with the public. In fact, Canadians are even willing to go to war to protect the country’s northern reaches. Originally, the maritime element of that presence was to be 3 new, heavy, armed ice breakers; this was replaced by the A/OPS program in 2007 because, according to the PM, the smaller ships would be more versatile.

But despite public approval that militaristic rhetoric was always somewhat hollow: the Prime Minister saw “no likelihood of Arctic states going to war.” And in any event the A/OPS is designed for a more “constabulary” role incorporating Arctic presence, surveillance, response and control, and support to other government departments. In fact, even that vision was controversial at the outset, with critics arguing that the A/OPS’ inability to operate in the Arctic beyond the summer months negated their value.

Both the rhetoric and the critiques persisted until recently when the focus began to fall on the actual construction of the vessels. The Harper Conservatives have loudly trumpeted the economic benefits (job creation, long-term stability for industry, etc.) But the costs of the A/OPS program have recently come under fire, in particular a $288 million “definition” contract with Irving Shipyards in Halifax, Nova Scotia. Critics note that other countries such as Norway, Ireland, Australia, and the United States have purchased (non-Arctic) offshore patrol ships for less than what Canada is paying to design them. Nevertheless the Conservatives stuck to their guns.

But the government’s strategy has now changed again. Paul Macleod reports that efforts by the Parliamentary Budget Office (PBO) to obtain the A/OPS statement of requirements have been rebuffed by the Department of Defence. That statement was previously publicly available, but has now been removed from the Department of National Defence website and the new Minister of Defence, Rob Nicholson, says that the statement of requirements falls outside of the PBO’s mandate – a position that both the PBO and the parliamentary opposition object to.

In retrospect the government’s defence of the A/OPS program seems to be simply response to the public mood and the criticisms of the day. Whether that reflects normal (though deplorable) efforts to manage public opinion, uncertainty within the government about the project’s value, or something else entirely is unclear.

But that lack of clarity is just the problem. Either the A/OPS are the right option for Canada or they are not. If they are, the government must clearly articulate the full set of reasons for the public. If they are not, the project must be terminated and the reasons fully explained. Whatever the case, the government’s approach to date has not served the Canadian public at all and we deserve a real explanation. But judging by the new secrecy we are not likely to get one.