At this point, Canadians are not significantly affected by the US government shutdown. Apart from hopeful tourists hoping to tour the National Monuments in DC, most Canadians will not notice a change in their day-to-day life. That said, there is some speculation as to what could happen if the shutdown continues for a significant period of time:

On the positive side, borders will remain open and no delays have been detected. Some have voiced concerns over whether overtime pay for border officials will be provided as necessary and if this will have any impact. Key programs cross-border shippers use remain open, including the Free and Secure Trade Program (FAST) and the U.S. Department of Agriculture. Don Coxe, Chairman of Coxe Advisors recommends investors sit tight at the moment, and remain cautious. At this point, there is no need to pull out of US markets.

However, the real problem facing both Americans and Canadians is the debt ceiling. The longer the United States speculates and debates raising their debt ceiling, the less confident the market will become in the US economy. As the USA accepts 74% of Canada’s exports, a decrease in the American economy can be detrimental to Canada.

The last time the American government debated the debt ceiling in 2011, it was reduced to a double A credit rating, down from the best triple A rating it had previously enjoyed from the prestigious Standard & Poor credit rating agency. Now, in a shameful case of political history repeating itself, the US is on the brink of suffering similar credit rating decreases if the debt ceiling issues are not quickly resolved.

Security:
As far as security goes, Canadians should have little to be concerned about due to the shutdown. At present, security is deemed an essential service and is as such largely unaffected in the US. That said, there has been some concern about the decrease in about the suspension of a great number of civilians in the intelligence community, and how this could impact intelligence collection to prevent terrorist threats. Director of National Intelligence James R. Clapper raised these concerns, pointing out that roughly 70% of the civilian workforce in security sectors such as the CIA, the National Security Agency and the Defense Intelligence Agency are currently off work. Clapper even warned against brain drain, suggesting that the shutdown is “a dreamland” for foreign national intelligence services to recruit American employees who are currently not being paid. US Army chief of staff Ray Odierno has echoed these sentiments, noting that “the longer it goes on, the worse it gets”. 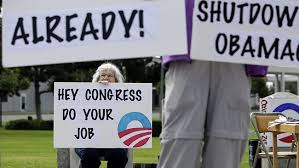 The real problem facing Americans is the debt ceiling

By contrast, US President Barack Obama has reassured citizens of their safety, and that the armed forces remain “ready for any contingency”. Generally speaking, most reports regarding the shutdown refer to the economic impacts rather than the security threats the shutdown can lead to.

More than Security: NATO and the Rules-Based International Order in the Post-Cold War Era