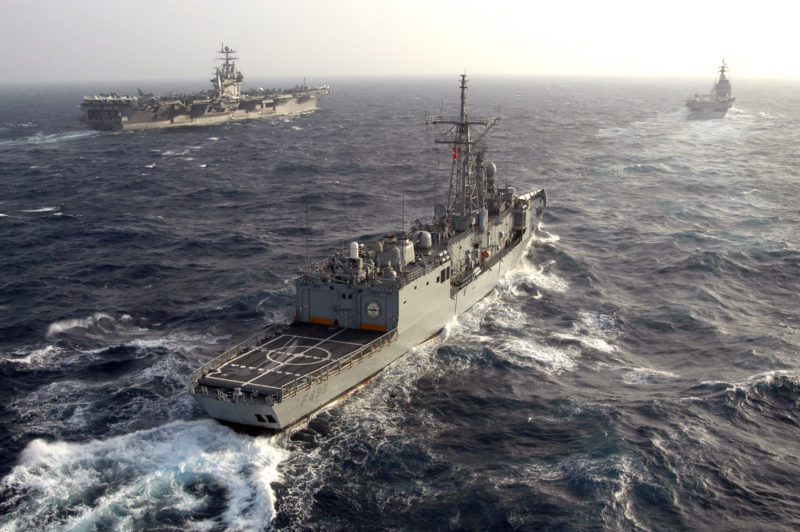 On May 16, 2016, Ukraine and Turkey signed a military cooperation plan, which would remain in effect until 2020. The document focuses on military reform and defense planning, and on improving the capabilities of the Ukrainian and Turkish armed forces. This signifies a growing level of cooperation between Turkey and Ukraine, which has expanded substantially over the past few months.

Recent tensions with Russia have however become the focus of Turkey and Ukraine’s bilateral cooperation. Over the past few years, Russian forces have dominated the Black Sea, after illegally annexing Crimea and ridding it of Ukrainian military forces, which has placed Ukraine at a strategic disadvantage. Additionally, Turkey’s naval forces have also been affected by Russia’s growing presence in the sea due to ongoing tensions over the Syrian conflict.

In 2014, following the Ukrainian protests that ousted then President Viktor Yanukovych, Russian military soldiers covertly entered the province of Crimea, gaining full control. Following a disputed referendum, Russia successfully annexed Crimea from Ukraine, an action that was considered illegal by Western nations, and deepened tensions between Russia and Ukraine.

The Turkish-Ukrainian relationship stems back to the 18th Century, when the Tatars of Crimea were under the control of the Ottoman Empire. Today, Turkey refuses to recognize the annexation of Crimea, and calls for the protection of Tatars. Over the years, Turkey has since a deterioration in its own relations with Russia, pushing Turkey and Ukraine closer together in the face of a common Russian enemy.

The war in Syria has precipitated a rise in tensions between Russia and Turkey, where the Russian-backed Assad regime has focused its efforts on weakening Turkish-backed opposition groups. Moreover, the conflict has led to multiple violations of Turkish airspace by Russian fighter jets. In November 24, 2015, Turkish forces took down one of these jets, further aggravating relations between the two states. Russia reacted by placing economic sanctions on Turkey, and deploying forces to Syria’s northern border with Turkey.

Not long after the downing of the Russian fighter jet, Ukraine’s National Security and Defense Secretary, Oleksandr Turchynov paid a visit to Ankara. Mr. Turchynov met with the Secretary-General of Turkey’s National Security Council, Seyfullah Hacımüftüoğlu, to discuss defense cooperation. Turchynov celebrated the meeting, stating that “broadening cooperation in the military and technical sphere was key to the development of a Ukrainian-Turkish strategic partnership.” This set the stage for the the formation of the Turkish-Ukrainian alliance.

On April 3, 2016, following multiple exchanges in March and April, 2016, Turkish naval ships entered the Ukrainian port of Odessa. Through a joint NATO exercise in the Black Sea, the Ukrainian and Turkish navies engaged in tactical maneuvering and signal communication exercises, deemed as another step in the deepening of cooperation by Ukraine’s Minister of Defense. Military cooperation between the two states will work to regain regional security in the Russian-dominated Black Sea.

In addition to strengthening military cooperation in the Black Sea, the two states also hope to expand economic relations, as a means of countering the losses incurred by both sides due to Russian sanctions. Furthermore, the Ukrainian government announced an agreement to launch a number of joint projects with Turkey, with a focus on free trade, tax facilitation, and joint industrial projects.

The newly formed Turkish-Ukrainian alliance will focus on tackling the ever-growing Russian threat in the Black Sea and Eastern Europe. Strengthening economic and military cooperation will be essential in countering Russian advancement in Crimea and Syria.

In addition, Ukraine hopes to strengthen cooperation with NATO through Turkey. In December 2015, Ukraine signed a roadmap with NATO on ‘defense-technical cooperation.’ The ongoing partnership has focused on the transformation of the Ukrainian defense and security sectors. Major General Petrenki, the Ukrainian Military Representative to NATO expressed the country’s intention of reforming the “Armed Forces of Ukraine to become fully capable and interoperable in accordance with NATO standards.” The newly formed military partnership with Turkey will prepare Ukraine for its set goal of joining NATO by 2020.