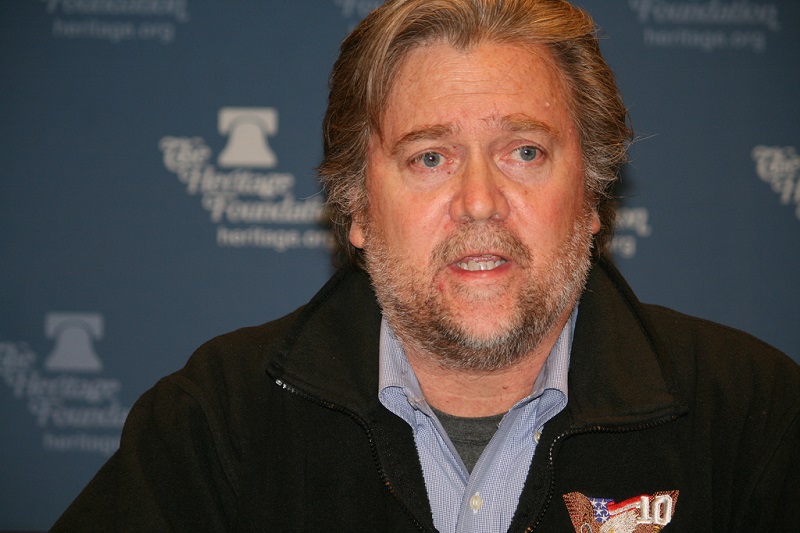 This is the first part of an occasional, multi-part series on the rise of authoritarian nationalist ideology under the Trump administration.

As the explosive protests against President Donald Trump’s travel ban on seven Muslim countries subsided in the evening of January 28, the media and general public began to notice that Trump signed another executive order that placed his Chief Strategist Steve Bannon on the Principals’ Committee of the National Security Council. A prolific documentary producer, businessman, and former executive chair of the alt right news site Breitbart, Bannon has no former credentials or experience in foreign policymaking.

In subsequent weeks, the media threw a widening spotlight on Bannon’s remarkable rise to power and unprecedented influence on the Executive Branch, to the point where critics derisively satirize him as “President Bannon”. However, having long operated in the shadows, the ideological positions of Bannon himself remain somewhat of an enigma. But what the public does know about Bannon suggests that the Chief Strategist intends to introduce a unique, unprecedentedly bleak eschatological worldview to American domestic and foreign policy.

Much of Bannon’s ideology can be pieced together from his past speeches, interviews, documentary productions, and other people’s anecdotal accounts. His artistic productions reveal a worldview that fundamentally rests of the assumption that American history is cyclical along generational lines. First proposed by William Strauss and Neil Howe, the Strauss-Howe generational theory boxes in American history into 80 year-long cycles, with four “turnings” in each cycle. According to Strauss and Howe’s predictions, America is now entering the trough of the wheel—the “Fourth Turning”—a period of prolonged crisis culminating in a huge bloody catharsis that will renew the nation’s civic and spiritual stamina.

What does Bannon’s Fourth Turning crisis entail? Bannon believes that the West is in moral rot, teetering on the brink of civilizational crisis. In his various pronouncements, Bannon seems to identify at least three weaknesses in the West: broken capitalism, globalization, and secularism.

Bannon believes that the immediate crisis affecting middle class Americans—the Great Recession—was exacerbated by crony capitalism. A former Goldman Sachs investor, Bannon turned against his former colleagues after the 2008 economic crash by arguing that crony capitalism created “a system now that has socialism…for the very poor…and we have socialism for the very wealthy”. This wealth disparity is causing the elites to become increasingly divorced from the realities of the middle and lower classes.

Yet, neither would Ayn Rand-style libertarian capitalism suffice. Not only are the fruits of capitalist labour unfairly distributed by the rigged system, capitalism has also lost touch with its religious moral roots. He condemns the commodification of individuals under contemporary laissez-faire capitalism, pointing out that the greatest capitalists of yesteryear were highly religious people.

A consequence of the neoliberal capitalist class being in charge is that they become dissociated with any sense of civic nationalism in their pursuit of money, foregoing the community in favour of globalization. What he calls the “party of Davos” lives divorced from the realities of working class Americans, and he condemns the fact that “there are people in New York that feel closer to people in London and in Berlin than they do to people in Kansas and in Colorado, and they have more of this elite mentality that they’re going to dictate to everybody how the world’s going to be run.”

Bannon’s worldview argues that the entropic establishment has long ignored the plight of the middle class and allowed globalization, cosmopolitanism, and immigration to ruin America. Bannon’s documentary Border War features people on the ground frustrated by the establishment’s inaction towards ostensible rising crime by illegal Mexican immigrants to take matters into their own hands. Through highlighting an interviewee’s words, Bannon seems to blame the establishment: “The right sees [undocumented immigrants] as cheap labor, the left sees this as cheap votes.”

Bannon directs his fire at not only Democrats, but also establishment Republicans. In a 2010 interview during the Tea Party’s heyday, Bannon said that “What we need to do is bitch-slap the Republican Party, and get those guys heeding too, and if we have to, we’ll take it over to make it a true conservative party.”

The media is complicit in not only ignoring the downtrodden masses but also by betraying their best interests through spreading the elites’ secular, globalist agenda. A week after Trump’s inauguration, Bannon lashed out at the media in an interview: “The media should be embarrassed and humiliated and keep its mouth shut and just listen for a while. I want you to quote this. The media here is the opposition party. They don’t understand this country. They still do not understand why Donald Trump is the president of the United States.”

Open borders and open immigration further threaten the fabric of the American nation. This civic society is implied to be one predominantly made of white middle class Americans, on whom Bannon concentrates as subjects (such as the Tea Party) and audiences (such as the white nationalist alt-right) of his media productions. In a November 2015 interview with the then-candidate Trump, Bannon disagreed with Trump’s suggestion to keep international students in the US, arguing that “When two-thirds or three-quarters of the CEOs in Silicon Valley are from South Asia or from Asia, I think . . . A country is more than an economy. We’re a civic society.” Indeed, not even legal immigrants are safe from Bannon’s purview: in a March 2016 interview, Bannon rhetorically asked his colleague Stephen Miller, “Isn’t the beating heart of this problem, the real beating heart of it, of what we gotta get sorted here, not illegal immigration? As horrific as that is, and it’s horrific, don’t we have a problem? We’ve looked the other way on this legal immigration that’s kinda overwhelmed the country?”

Secularization weakens the West in more ways than just capitalism. Perhaps at the heart of all of Bannon’s concerns is a civilizational one: the abdication of the West’s Judeo-Christian heritage in its moment of greatest danger. Needless to say, the establishment is also undermining white, Christian American values by supporting causes that encourage racial affirmative action and sexual openness. He regards progressives as perpetuating a culture of victimhood based on race and sex; he advocated for good conservative, pro-family femininity in women who “wouldn’t be a bunch of dykes”. Many of Bannon’s documentaries investigate this theme of corrosive secularism. For instance, Bannon’s 2016 documentary Torchbearer feature reality TV show Duck Dynasty’s Phil Robertson denouncing everything from celebrity culture to science as sources of modern day evils.

Much of Bannon’s infamous 2014 Vatican speech is themed around the need for conservative nationalists to take back the West and defend the Judeo-Christian civilization inheritance from such moral rot—and in particular, because the West must be strengthened against Islam. His invocation of the Battle of Tours and the Battle of Vienna as decisive moments that “bequeathed to us the great institution that is the church of the West” exhorts his listeners to steel themselves for a glorious crusade to come.

And a crusade America will need to prepare for, for like St John on Patmos, Bannon sees a civilizational storm of apocalyptic proportions fast engulfing the West…

To be continued in Part 2 of this series, on Bannon’s apocalyptic solution to the Fourth Turning.