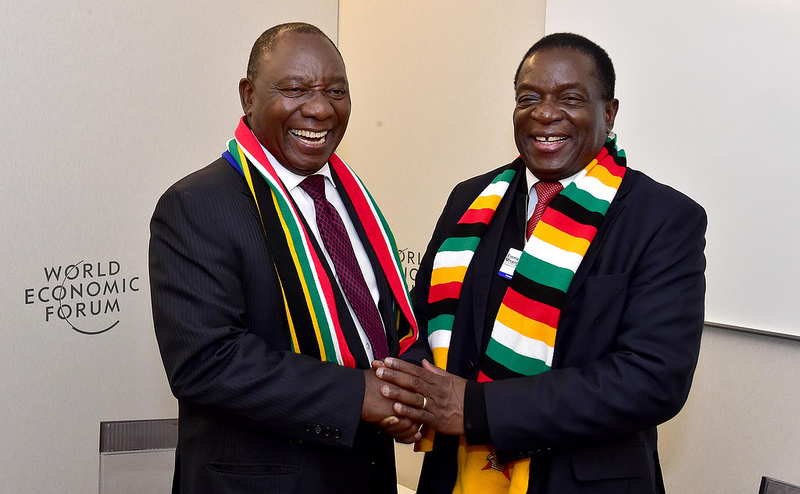 There has been some suggestion that China may have had a hand in the overthrow of long time Zimbabwean dictator Robert Mugabe. While there is no clear evidence that China was directly involved in the overthrow, there is clear evidence that China already has deep ties to Zimbabwe’s new ruler, Emerson “the crocodile” Mnangagwa. There is a very good chance that Beijing will use this connection to expand their influence in Southern Africa.

Mnangagwa, known as the crocodile because of his cunning and viciousness, was trained in China during the 1960’s to fight for Zimbabwe’s independence. This long connection makes him a very good candidate for ruler, as far as China is concerned, but a sympathetic ruler is not enough. China would like to see more money flowing through Zimbabwe, and for that, they need sanctions to be lifted.

China has considerable interests in Zimbabwe’s mining industry, which was threatened by Mugabe’s law that limited foreign ownership in Zimbabwe to 49%. Mnangagwa has already set about reversing the law. Though he says that the law will remain in place for diamonds and platinum, during his visit to China in April, he will probably make an exception for Beijing.

Much of China’s investment in Africa has to do with agriculture, and Zimbabwe was once referred to as the Bread Basket of Africa. Though its agricultural yield since Mugabe’s land seizures has been incredibly low, it still has the potential to be very useful for China’s food and textile needs. China will need to convince the new president to recreate larger farms and find people with the relevant experience and equipment to operate these farms.

The Communist Party’s influential mouthpiece, the Global Times, is confident that Mnangagwe is the man who will lead Zimbabwe, and by extension, China’s interests in the country, into a new era of prosperity. It is well known that the Chinese Communist Party (CCP) has been training officials of ZANU-PF, the ruling party in Zimbabwe, on how to win the hearts and minds of the electorate. This is so that free elections can be held during 2018 and sanctions can be lifted. Mnangagwa seems to fully endorse this idea, and has promised that he will hold free elections.

To further aid his goal of having sanctions removed, and probably on the advice of China, Mnangagwa has announced another dramatic turnaround from the policies of Mugabe; he announced that he will reverse the “fast track agrarian land reforms,” which, sometimes violently, forced white farmers off their land. This is probably an attempt to encourage donors to restart their programs which sent aid into Zimbabwe. Donors, including the World Bank and the IMF, cut aid in 2001 because of Mugabe’s land seizures. Mnangagwa’s promise to return the land has been met with scepticism, as 3000 resettled people live on that land, and they make up a vital part of ZANU-PF’s constituency. Though they live on farms, many of these people are starving. Mugabe pointed out in 2017 that the resettled people lack the appropriate experience, equipment, and money to make the farms run. With this in mind, it could be possible for the new president to negotiate land returns for farmers and an improved living situation for the people who own the farms now. More importantly, much of the prime farm land seized did not go to the poor, but rather to rich officials to keep them in Mugabe’s pocket. If Mnangagwa can reinstate the old owners of these farms, it would go a long way to growing the economy and feeding the people.

The lifting of sanctions is only part of China’s plan, as they also need to ensure that Mnangagwa wins the free election that they are trying to orchestrate. For him to win during genuine, free elections, Mnangagwa will need to show the people that their lives have significantly improved since the fall of the old dictator. To do this, he will need China’s help. In 2015, China made up half of all foreign investment in Zimbabwe, and since the ascension of Mnangagwa, China has secured a key investment deal with him. Any movement on the part of the economy could improve the standard of living for many Zimbabweans. Current estimates for the unemployment rate are not at all clear, and range from 5% to 95% with all of the figures providing different definitions of unemployment. What is clear is that the majority of the population is not ‘formally’ employed. China’s $153m loan to build a new airport and parliament building could put many Zimbabweans to work, and dramatically improve the government’s popularity. China seems to have realised this, and has put a seven year grace period on the loan.

Beijing may see one more potential benefit of investment in Zimbabwe, the adoption of the yuan. At the end of 2015, Finance Minister Patrick Chinamasa announced the official use of the currency in Zimbabwe. Chinese tourists can now pay for services in their own currency and Zimbabwe will pay back its now more than a billion dollars in low interest debt to China in the yuan. Average Zimbabweans rely on black market currency, such as the US Dollar or South African Rand, for day to day transactions, which means that not a lot has changed for them with since the adoption of the yuan. For China, this is an important step in further internationalizing its currency.

It is unlikely that China was directly involved in the coup that saw Robert Mugabe ousted from power, but their fast movement and clever maneuvering have put them in the best position to benefit from the regime change. Emerson Mnangagwa needs China to stay in power, and for that relationship to work, he will have to grant more and more of their demands.

Disclaimer: Any views or opinions expressed in articles are solely those of the authors’
and do not necessarily represent the views of the NATO Association of Canada.