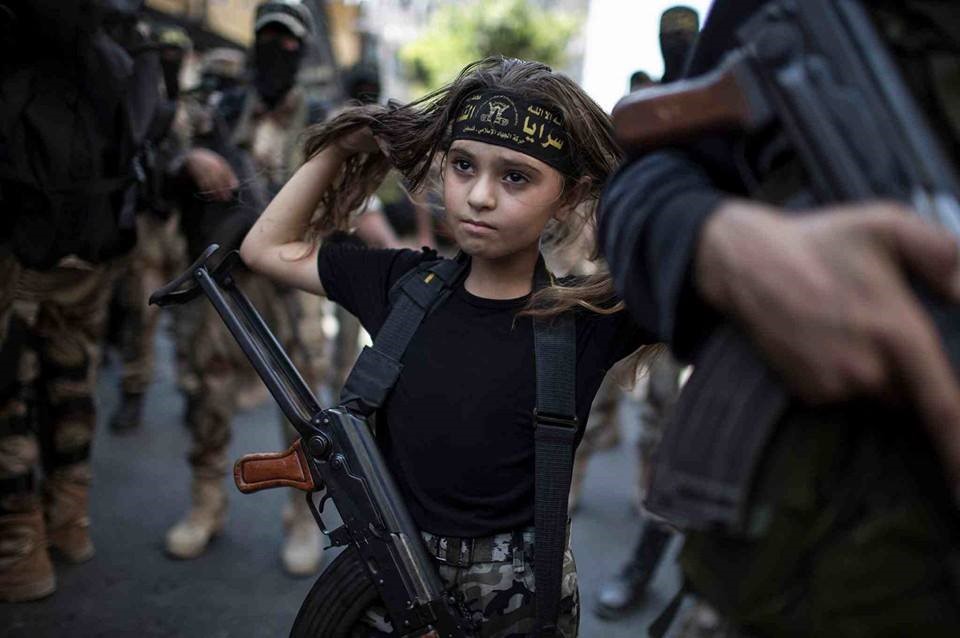 In 1997, The Cape Town Principles defined a child soldier as anyone under the age of 18 who is part of any kind of regular or irregular armed force in any capacity. The symposium, ran by UNICEF, had the goal of establishing 18 as the minimum age of recruitment and for helping demobilized child soldiers reintegrate into society. The word “girls” is mentioned four times, and only in the context of sexual abuse and forced marriage. The document states: “Particular attention should be paid to the special needs of girls, and appropriate responses should be developed to this end.”

“The problem with stereotypes is not that they are untrue, but that they are incomplete. They make the single story become the only story.” – Chimamanda Ngozi Adichie

The appropriate responses can only be developed with a cohesive idea of what roles girls play during wartime. In Canada, when we hear ‘child soldier,’ most of us think of a small sad African boy holding an AK-47. He’s everywhere, from ads that shroud our TV screens, to blockbuster hits, like ‘Blood Diamond.’ He is a damaged young child forced to become an adult much too soon, but he is not the only one. War affects everyone and in a conflict where age is not considered, why would gender? According to the United Nations (UN), 40% of all child soldiers are girls. The girls are not only victims of sexual slavery or relegated to domestic tasks, but they are also given weapons training and deployed to combat.

Many child soldiers are recruited through campaigns that make them believe that joining the organization will help their chances of survival while others are abducted from their homes. In the Democratic Republic of Congo (DRC), some girls volunteer to become soldiers because they see a severe lack of opportunities if they stay at home. Education is limited and many girls are pushed into war by financial hardships suffered at home. Girls might also be encouraged to join armies because they have suffered from sexual abuse and are no longer ‘pure.’ According to Sandra Olsson, spokeswoman for Child Soldiers International, “…[female child soldiers] are encouraged by their parents, who think that providing their children to the armed group can protect the family against attacks and looting.” In other cases, girls are recruited because of the ‘innocent girl’ stereotype, which enables them to cross borders easily and become spies and informants. They might also be called up to do chores so that the boys and men have more time to engage in other activities, whether it be drinking or training for combat.

The current model for dealing with adult soldiers is ‘Disarmament, Demobilization, and Reintegration ’ (DDR). Disarmament requires the soldier to give at least one weapon to the authorities. Demobilization involves a thorough evaluation of soldiers, and finally, reintegration, is where the ex-combatants prepare for civilian life by gaining civilian status and finding a job and proper income to support themselves. The model is also used for child soldiers, with several changes to accommodate their nature and to allow them to regain sensitivity to the horrors of war. Unfortunately, the programmes in place take very little in account about the experience girls have in conflict situations.

In addition, children that are released are frequently found with disabilities, such as loss of hearing, blindness, or loss of a limb. They might also be found addicted to drugs and alcohol, suffering from stress and malnutrition. Often, they are diseased, suffering from malaria, tuberculosis, breathing disorders, and gastroenteritis. The child soldiers frequently suffer from STDs, which run more rampant amongst females than male child soldiers, due to the increased amount of sexual abuse they suffer. The DDR programmes usually account for treatment for the above ailments, but if only 5% of female child soldiers are entering the programmes, then the programmes are not as effective as they should be.

The DDR programmes must also focus on reintegrating girls into society, which is arguably the most difficult part, and the biggest difference between girl and boy former child soldiers. Because of the stigma that exists within their societies for rape and sexual abuse, a female child soldier is frequently ostracized and unable to find proper employment opportunities. In many of these societies, employment and education are costly and very limited for females, which further exacerbates the issue. The lack of education available for girls after they return to civilian life often forces women into prostitution, as they are unable to find a way to gain skills in trade.

Additionally, a female former child soldier might return pregnant or with a baby, which makes it hard for their families to re-accept them, if it is even an option. In one case, when a girl named Grace returned to her community in Uganda, she faced discrimination because “[she] still has violent character.” Soon, this discrimination was passed on to the children she had, with neighbours preventing their own kids from mingling with Grace’s. Grace had a loving and supportive husband and the skills to make money, but others are not so lucky.

In some cases, girls are seen as having crossed the gender divide, too masculine to be married, leading to further ostracization. Girls also have trouble returning to their prescribed gender roles. Sometimes, life in the armed groups actually offers more equality than otherwise. For example, the Lord’s Resistance Army in Uganda has female fighters that rise up the ranks just as men do. When it comes to female child soldiers, the role they play during armed conflict depends on the region, armed group, and individual case. Some groups, for example, have even banned sexual relations within their troops, so the experience can be very differential from group to group. This makes rehabilitation much more difficult to manage as their experiences cannot simply be assumed.

As the usage of child soldiers continues to be prevalent, even increasing in some areas of the world, the importance to changing our perceptions to include girls when we think of child soldiers becomes increasingly important. The most significant change could be to stop believing that girls are only passive victims of war. They are actively sought out to  play significant roles. The experiences of female child soldiers are multidimensional and it’s time that programmes designed to demobilize them understand that.