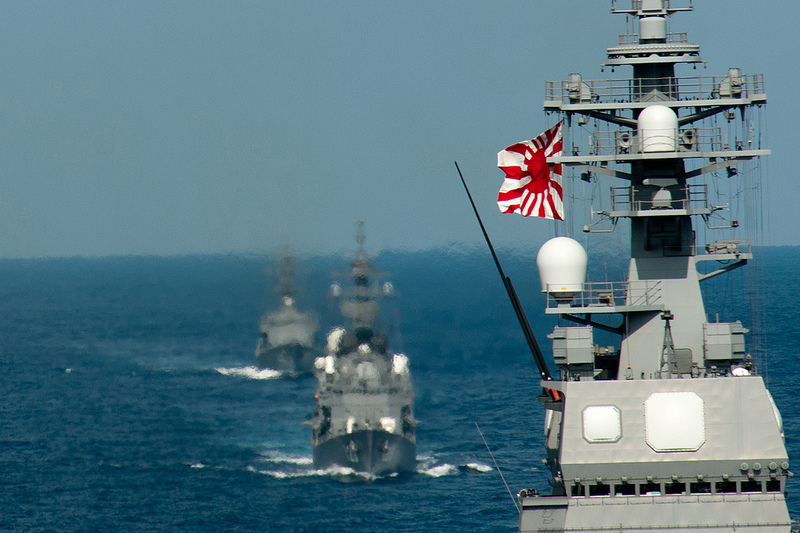 Following the February 2015 deaths of two Japanese citizens at the hands of Islamic State, Abe pointedly revealed the aim of constitutional reform: to give Japan an increasingly activist role in shaping the security environment both within and beyond the Asia-Pacific. Such a role would be unprecedented in Japan’s post-war history. A unique constitutional arrangement, Article 9 restricts Tokyo to defensive measures, denying it the right to settle international disputes through force.

The sticking point for Abe and many conservatives within the LDP is that neither Article 9 nor the constitution was written by the Japanese themselves, but by American lawyers during the post-1945 occupation. Japan’s pacifist foreign policy was then affirmed by Prime Minister Yoshida Shigeru’s (1948-1954) diplomatic strategy, termed the Yoshida Doctrine, under which successive administrations have continued to operate. The strategy’s key priorities are trade, the alliance with the United States and maintaining a low profile internationally.

It is this final part that Abe seeks to change, effectively normalising Japan within the UN system and expanding its freedom of action, leaving future Japanese leaders free to mould the region’s security architecture. At the same time, reforms would also end the semantic contortions surrounding domestic discussion, whereby for 70 years Japan’s leaders have pretended not to have a military.

In fact, Japan has the seventh largest defence budget in the world, at $49.3 billion in 2015, and one of its most modern militaries. The Japan Air Self Defence Force (JASDF) is in the process of acquiring the F-35A stealth fighter, while the Maritime Self Defence Force (JMSDF) has recently commissioned the 20,000-ton Izumo class helicopter destroyer.

Shinzo Abe’s vision for a more muscular Japan operating in line with its position as Asia’s second largest economy, would in isolation be viewed with concern by some nations given the legacy of World War Two and the LDP’s revisionist tendencies. However, China’s growing assertiveness in the Asia-Pacific is allowing Abe the political cover to achieve his ambitions.

In Abe’s short-lived first administration (2006-2007), quadrilateral security cooperation between India and members of the Trilateral Strategic Dialogue (Australia, Japan and the United States) was a foreign and defence policy goal. India with its 1.4 billion people is viewed as the natural balance to China’s rise, hence Abe’s interest in security engagement. The concept however failed to gain much traction. In 2006, the political climate in Asia was more benign.

Upon Abe’s return to office in December 2012, the security situation in Asia had deteriorated rapidly, especially in the East China Sea. Sensing an opportunity, Abe has wasted little time in building up Japan’s security ties with New Delhi, Washington, and Canberra.

India under Narendra Modi is now much more receptive to Abe’s calls for security cooperation. As conservative nationalists seeking to reform the UN Security Council with Japan and India as permanent members, the two men have much in common. Additionally, both are involved in territorial disputes with China, with the state of Arunachal Pradesh seeing regular incursions by Chinese troops.

China’s economic and military advantage has enabled Abe to push defence and security ties. At the 9th Indo-Japanese summit in December 2015, Abe and Modi signed a wealth of deals increasing the strategic character of relations. These included a controversial pact, allowing Tokyo to export nuclear technology to India, and a $1.3 billion agreement for New Delhi to acquire a dozen ShinMaywa US-2 amphibious aircraft for use near the strategic Nicobar Islands.

With Chinese warships present in both the East China Sea and the Indian Ocean, Indo-Japanese ties have been further enhanced by regular JMSDF participation at the Malabar naval exercises alongside the US and India. Held this year off the coast of Okinawa near the disputed East China Sea, this demonstration of interoperability was a clear signal to Beijing that its assertiveness is drawing these states closer together.

Meanwhile in the US, the Obama administration has welcomed Abe’s ambitions for Japan to play a greater role in managing Asia’s security architecture. The 2015 revision of the US-Japan defence guidelines, the first since 1997, together with the concept of “collective self-defence” now allows the JSDF to come to the aid of US forces under fire in Asia.

One of Abe’s key successes has been to achieve a guarantee that the US-Japan defence treaty covers the Senkaku islands in the East China Sea. In the aftermath of Crimea, this became a particular concern for Tokyo. Obama’s promise that any attempt by Beijing to alter the status quo would invoke a response from the US 7th Fleet presented a unified front and an important affirmation of Japan’s claims.

In Australia, the trend since 2000 has also been towards closer defence cooperation, albeit not without obstacles. Although it ultimately fell through, former PM Tony Abbot sought to expand ties by personally promising Abe a deal worth $38.5 billion to build 12 next generation submarines for the Royal Australian Navy.

The signing of a 2014 defence cooperation agreement and the rotation for the first time of JSDF troops in the 2015 Talisman Sabre exercise demonstrates that ties are growing, but perhaps not at the pace Abe would like. A Global Times editorial stated that “if Australia steps into the South China Sea waters, it will be an ideal target for China to warn and strike”, making it evident that ties with Japan in the face of China’s assertiveness may prove to be vital.

Growing concern over China’s assertiveness has, then, provided the impetus for Abe’s desired regional cooperation and Article 9 reforms.

Domestically, Article 9 reforms have proven deeply controversial, given the symbolic power of Japan’s pacifist identity. Attempts at similar changes during Abe’s first administration led to its 2007 collapse. But the constant drumbeat of Chinese incursions into Japanese territory and accompanying nationalist rhetoric now make reforms more palatable. Japanese voters have become increasingly concerned about maritime disputes and have an increasingly negative view of China. The pressure from Beijing in recent years has ensured that a former failed prime minister now stands on the cusp of the most important constitutional reforms Japan has seen in 70 years.