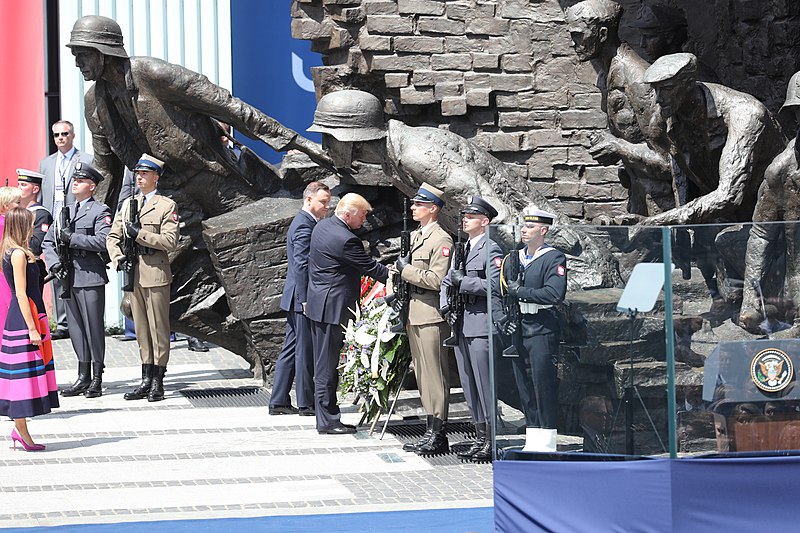 Donald Trump’s loss of the US presidency is a fait accompli. He will be out of the White House on January 20th, 2021, regardless of what strands of hope his most ardent supporters cling to for a reversal of fortune. However, a sober assessment of Trump’s legacy vis-a-vis NATO should temper any expectations that the US relationship with the alliance will fundamentally change, or even markedly improve, simply because a man with a more placid temperament will shortly occupy the Oval Office. Neither the commonplace black-and-white presentation of Trump as unequivocally harmful to NATO, nor a halcyon fiction of tranquil relations between the US and NATO before the age of Trump, are accurate pictures. Trump’s impact on transatlantic relations has been much more ambiguous than these facile images suggest, and the future for US-NATO collaboration under Trump’s successor is much hazier than many realize. In the future, historians will have the benefit of distant retrospection to interpret Trump’s foreign policy with much more perspective than avails current observers. However, the groundwork for that assessment can be laid right now.

Trump’s allegedly dim appraisal of NATO cannot be understood in isolation. It is part of his broader political worldview, one that sharply siloes domestic and foreign affairs, assigning unabashed pre-eminence to the former. The direction US foreign policy has taken pursuant to this worldview has created considerable instability on the world stage. However, the common journalistic characterization of Trump as a trailblazer in this respect is amnestic. Trump’s foreign policy has been more of a continuation, rather than a repudiation, of that of his predecessor, Barack Obama.

This should not come as a great surprise, although observers can be forgiven for failing to pick up on the commonalities of the two men. Much of the mainstream media has been so mired in identity politics that it has quite thoughtlessly juxtaposed Obama and Trump as supposed political antitheses of one another. They are not. After all, it was Barack Obama who anticipated Trump as a “wrecker” candidate, an “outsider” who would “shake up” the “establishment” in Washington – which was, and remains, the object of Americans’ nearly unanimous scorn. This explains why a relatively significant portion of the American electorate voted for Obama in 2008 and 2012 before voting for Donald Trump in 2016. The image Obama cultivated as a presidential candidate, as one whose policy focus would be firmly directed inward, was part of his 2008 campaign to contrast himself starkly with the hyper-interventionism of the neoconservative Bush Administration. The latter’s preoccupation with foreign wars and laissez-faire approach to the economy at home was credited by observers at the time with precipitating the Great Recession, which created the enormous economic underclass that would go on to fuel the rise of Trump populism in the United States. Obama secured his isolationist identity almost passively once his 2008 competitor in the presidential race, John McCain, promised to double down on Bush’s hawkishness. This, as much as Obama’s identity as the would-be first black US president, swept him to victory. As president, Obama’s firmly domestic policy interests, coolness toward European allies, and foreign policy “pivot” towards Asia, cleared the path to isolationism that Trump has merely paved for the last four years.

Any assessment of Trump’s foreign policy legacy must be contextualized in this milieu. It is a set of circumstances that even Trump’s inexorable will and forceful personality was not capable of conjuring alone. He exploited what was already there. He was bequeathed a situational inheritance he would probably be loath to acknowledge. Once this is admitted, however – that Trump is not as much of a political maverick as he is a role player on a continuum – it becomes easier to plot both his NATO legacy and ponder how Joe Biden’s presidency can be expected to stack against it.

Trump’s bequest vis-à-vis NATO can be distilled down to two salient dividends. The first would be a form of succèss de scandale, otherwise known by the adage, “bad press is better than no press.” NATO can sanguinely welcome the fact that Trump’s public criticism of the organization’s members’ failure to achieve military spending aspirations – his imprecision notwithstanding – has gotten the public talking about the organization. This has created a broader, more attentive audience whose hearts and minds NATO can and should attempt to win. NATO apologists can speak to these awakened listeners to rebut certain particulars of Trump’s invective against the organization, while not necessarily defensively exculpating members of the alliance whose material support for its commitments falls short of the mark.

This brings us to the second major element of Trump’s NATO legacy: his pressure on allies has born fruit in wringing out greater financial commitments from alliance members towards supporting their respective militaries and NATO central administration. While NATO apologists have rightly pointed out that spending by NATO members was already trending upward prior to Trump’s assumption of the presidency, it stretches credulity to believe that the hundreds of billions of dollars in additional defence funds committed by NATO members since Trump took office would have been as forthcoming had it not been for Trump’s vocal agitation on the issue.

Some European leaders are now agog at the prospect of an incoming Biden administration. Part of this is probably mere personal relief at the prospect of dealing with a more congenial figure like the President-Elect after experiencing Trump’s cringeworthy boorishness at previous diplomatic engagements. However, it can be surmised that part of Europeans’ relief stems from the expectation that pressure from Washington to boost military spending will be less acute. It would be a shame if such a reprieve also translated into a license to renege on the NATO spending commitments borne of Trump’s pressure, especially as cuts to military spending will become more tantalizing in the aftermath of the economic catastrophe wrought by COVID-19. Fortunately, trends do not currently appear to indicate that this is on the immediate horizon.

Before champions of NATO cheer the rise of Joe Biden, they should remind themselves that those on the political left, especially the progressive left, have not, historically speaking, been natural allies of NATO. Although Joe Biden is unquestionably a centrist, he leads a party that is rapidly shifting leftwards, and influenced by an increasingly vocal progressive faction. This is less than encouraging for NATO when one considers the fact that survey data strongly suggests that across the 30-member alliance, those with conservative political views are more supportive of NATO than their left-wing compatriots. Ironically, there is one exception to this trend – the United States. Only in that country are Democrats more likely than Republicans to have favourable opinions of NATO. However, the picture is more complicated than it appears at first glance. It is only in recent years that Democrats’ support for NATO has become markedly greater than Republicans’, whose level of approval of NATO has more or less held steady. This upswing in Democratic backing could very well be the outcome of superficial tribalist tendencies well-known to American politics, in which one political side supports policies and causes thought to be inimical to their partisan opponents’. In other words, Democrats might have come to favour NATO out of reaction to Trump’s purported disdain for the organization, rather than out of genuine concurrence with (or even knowledge of) its aims. Such superficiality is unstable, and Trump’s departure from the Oval Office might precipitate an erosion of Democrats’ countenancing of NATO. Coupled with the lingering imprint Trump has left on GOP culture, including a more pro-Russian stance among some of its rank and file, NATO faces rough terrain in decisively harnessing American commitment to the organization.

While Joe Biden has sought to reassure Europeans of his upcoming administration’s devotion to NATO, his personal political record does not inspire confidence that this support will be material rather than merely verbal. Trump’s devastating rebuttal to Joe Biden during the third 2020 presidential debate, when the latter accused his opponent of being ‘soft’ on Russia, constitutes a rebuke of the Obama-Biden administration’s NATO legacy that is difficult to evade. As Trump pointed out, the Obama Administration’s response to Russia’s seizure of Crimea in 2014 – the greatest international landgrab in Europe since the end of the Second World War – was limp-wristed at best and evoked a revival of the perennial discursive thorn in NATO’s side, namely, questions swirling around about its resolve and usefulness in the face of its apparent impotence. One wonders whether the heir to that administration, Joe Biden, can be expected to react more strongly in the face of similar aggressive moves by expansionist powers. When it comes to European defence, the Trump White House has a more impressive record than the preceding administration. The United States contributed more troops to European defence under Trump than under Obama, and has spent far more on the European Reassurance Initiative – as much as three times more.

In all likelihood, Joe Biden will not be radically different from his predecessor in foreign policy, certainly not as much as many are hoping. Once again, it is helpful to remember that US presidents operate on a continuum, inheriting a set of circumstances that constrain the politics of personality and commit them to a trajectory established by historical forces. Joe Biden, a septuagenarian who has not proven himself to be particularly trailblazing in his decades-long career in Washington, is no exception to this rule. In many ways, he will be carried along with current trends. He ran a presidential campaign that underscored his moderation and highlighted policies that appealed to elements of the Trump electorate he sought to bring into the Democratic Party fold. In contrast to Hillary Clinton, for whom no such pretense was possible, Biden has emphasized his working-class roots and their nativist connotations. While a smart campaign strategy, it has also forced him to continue many of the policy trends championed by Trump. Biden has pledged to be “tough” on China, unabashedly taking a page right from Trump’s playbook. He has also encouraged Americans to “buy American” and unveiled his vision for an autochthonous post-COVID US economic recovery, a protectionist-sounding echo of Trump’s views on international trade and a repudiation of trade liberalization orthodoxy that has been the hallmark of the rules-based international order since 1945. Like it or not, Trump’s legacy will cast a long shadow – over America, NATO, and the rules-based international order for many years to come.

Photo: US President Donald Trump lays a wreath at the monument to the Warsaw Uprising of 1944 (2017), by Paweł Kula, Sejm RP via Wikipedia Commons. Licensed under CC 2.0.