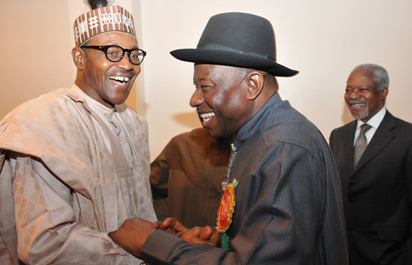 With the Nigerian election quickly approaching, the fact that the campaign’s leading candidates, Goodluck Jonathan and Major General Muhammadu Buhari, each fall on opposite sides of the Muslim-Christian divide is disconcerting in a country so rife with religious tensions. It is no surprise, then, that Mr. Jonathan’s anticipated re-election is predicted to be accompanied by an increase in Islamist violence. Since 2001, Nigeria has witnessed growing disputes between the Christian ‘indigenes’ who largely occupy the South, and the Muslim ‘settlers’ who largely occupy the North, over “land, power, and jobs”, contributing to a deep-seated distrust of each side for the other.

Mr. Jonathan first came to power in 2011, amidst opposition claims of vote-rigging. With an estimated net worth of $100 million, Jonathan is an ethnic Ijaw, and a Christian from Nigeria’s southern state of Bayelsa, having previous work experience in education and environmentalism. Jonathan first entered the political spotlight in 2007, when he was ‘hand-picked’ by the leadership of the centre-right People’s Democratic Party (PDP) to run on the vice-presidential ticket, although still a relative newcomer to Nigerian politics. In December 2013, the Jonathan presidency was publicly condemned by Olusegun Obasanjo, Nigeria’s president from 1999 to 2007, for failing to rid Nigeria of “corruption, piracy, kidnapping and oil theft”. Despite such claims, Jonathan maintains wide popularity with his base, composed of Nigeria’s Christian population in the South.

Mr. Buhari, 14 years the senior of the 57 year old Jonathan, is an ethnic Fulani, and a Muslim from Nigeria’s northern state of Katsina. Buhari has campaigned on his lengthy military background, claiming to be Nigeria’s best bet at solving the Boko Haram problem. However, as a supporter of Sharia law in northern Nigeria, he has attracted resentment and suspicion from Nigeria’s Christian community. Buhari once ruled Nigeria, having led a military coup against Shehu Shagari, Nigeria’s president from 1979 to 1983. During that time, he launched a ‘War Against Indiscipline’, imposing censorship, arresting political opponents, and implementing draconian punishments including 21 years imprisonment for cheating on a state exam. These policies were emulated by Nigeria’s state governors. In Bauchi, for example, “all ”free women” [were] ordered to get married within three months or leave the state.” In other regions, “card playing, certain kinds of music, [and]”seductive dress”…[were also] prohibited”.

In an effort to curb national tensions, Buhari and the APC hope to diversify Nigeria’s economy by expanding its economic focus beyond oil production. Buhari has adopted a social justice platform which includes a ‘War Against Corruption’, food security, calls to improve the power supply, an integrated transport network, free education, the devolution of federal power, accelerated economic growth, and affordable health care.

Regarding National Security, the APC has stressed that political violence inhibits the democratic process, and has called for an increase in the quantity and quality of law enforcement agents, the establishment of a “Serious Crime Squad” to combat “terrorism, kidnapping, armed robbery, militancy [and] ethno-religious and communal clashes nation-wide”, a decentralized police force, which would allow for community policing, an improved security relationship with the African Union and the Economic Community of West African States, improved border control, and the establishment of a National Coast Guard to ensure marine defence.

In a speech delivered in the Borno State Capital of Maiduguri on Saturday January 31, Jonathan promised to “end this insurgency”, although he has failed to outline how he will go about doing so. This is not the first time that Jonathan has claimed to have the upper hand on Boko Haram. On October 17, 2014, Jonathan declared victory over the terror group, only for Shekau to deny the ceasefire in a video released later on October 31.

While Jonathan has thus far failed to curb the threat posed by Boko Haram, his first term was largely successful in other respects. As a result of his lead in privatizing the electric power industry, and expanding commercial agriculture, Jonathan is widely regarded as the frontrunner in the ongoing race.