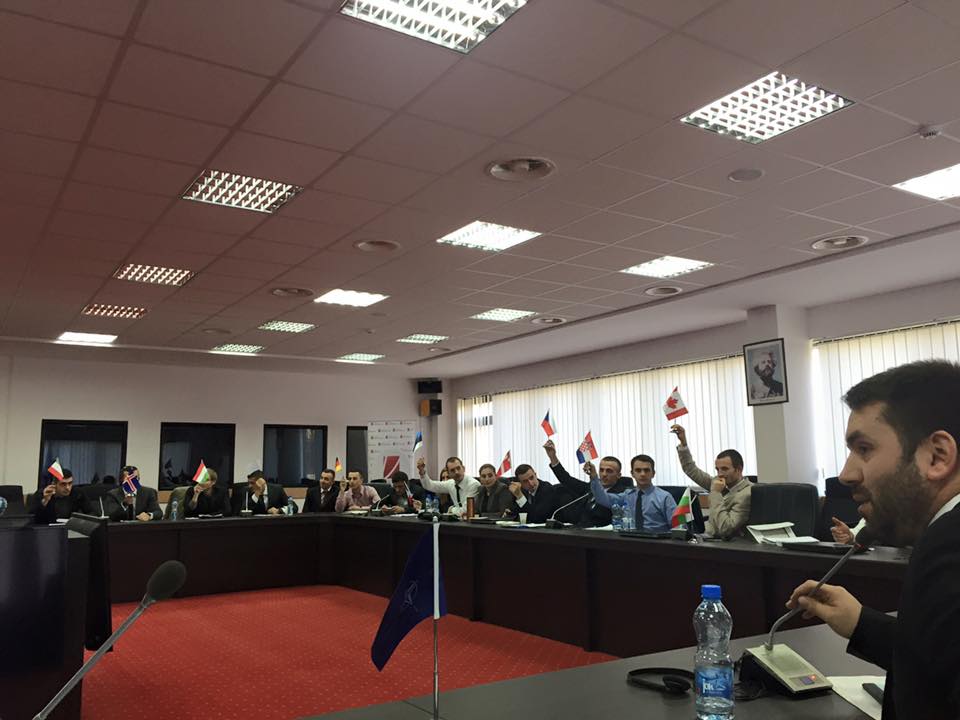 Special thanks to sponsors Kolegji Universum and the Friedrich Ebert Stiftung organization for making this conference possible.

On November 28, 2015, the Kosovo Youth Atlantic Treaty Association (KYATA) launched a 3-day conference covering the evolution of NATO in the 21st century, the Syrian crisis and NATO’s southern flank. Gathering in the architecturally stunning National Library of Kosova, Mr. Besim Salihu, the President of KYATA, welcomed the participants and started off the conference with an opening speech.

Following this, Mrs. Mevlyde Hyseni from the Friedrich Ebert Stiftung organization spoke about NATO’s open door policy and the role of Kosovo Force (KFOR) in Kosovo. Dan Qarkaj then shared the news that the three best participants in the conference would be awarded scholarships to study at the Kolegji Universum in Prishtina, Kosovo.

Given the political situation in that country, the itinerary had to be adjusted. Coinciding with the first day of the conference as well as National Flag Day, around 35,000 citizens participated in a demonstration. The protesters were expressing dissatisfaction relating to a deal that was made with Serbia, which would have given more autonomy to the Kosovar Serbian minority. Compounding the complexity of the situation, the leader of the main opposition party, Mr. Albin Kurti, had earlier been arrested for releasing tear gas in Parliament. The conference organizers and the local cadets explained the nuances of the political situation to the international delegates.

On Day 2 of the conference, Skender Boshtrakaj, director of the Kosova National History Museum, gave a workshop on diplomatic negotiations. Mr. Boshtrakaj outlined the Edward de Bono model, which stresses six different modes of thinking. He stressed the importance of remaining objective regarding media reports on the Paris attacks and how to identify truths and half-truths. Moreover, when on uneven bargaining ground, it is useful to keep the other party’s interests in mind.

In the afternoon, Dr. Clirim Toci, defence expert, former NATO commander, and Colonel, led a workshop on consensus building and decision-making. Dr. Toci also evaluated the generational gap and the growing acceptance of gender equality in Albania. He also touched on the importance of defence diplomacy, stressing that representatives from the military do their fair share of diplomatic maneuvering. Dr. Toci quoted Sun Tzu, noting that the supreme art of war is to subdue the enemy without fighting. He also touched on emerging security threats such as cyberattacks and hybrid warfare. He noted that with respect to Russia’s revanchist foreign policy, Georgia was the aperitif, Ukraine was the starter, and the Baltics were the main course.

On the final day of the conference, the participants convened at the headquarters of the Ministry of the Kosovo Security Forces. Mr. Dominic-Haydn Braithwaite, the director of the NATO Advisory Team in Kosovo, gave the opening speech. He outlined NATO’s role in capacity building and the importance of assisting the Kosovo Security Forces to become a civilian-controlled, democratically accountable force. Mr. Braithwaite also discussed the Paris attacks and the downing of a Russian jet by Turkey.

Next, Mr. Besim Salihu, President of KYATA, outlined the rules of the NATO Summit (NAC) simulation. The contributors participated enthusiastically and scholarships were awarded to Fatlum Demiri (representing Turkey), Qëndrim Bytyqi (representing the United Kingdom), and Rilund Idrizi (representing Denmark). Overall, the conference was a resounding success, due, in large part, to the hard work and hospitality of the Kosovo Youth Atlantic Treaty Association.