This controversial video of supposedly grassroots origins is symbol of the complexity of Euromaidan.

The protest movement in Ukraine has made some historic achievements over this past weekend. President Victor Yanukovich was impeached and has left office. Speaker of Parliament Oleksandr Turchynov has been named interim President until elections are held on May 25. Foreign Minister Leonid Kozhara who was in favor of closer relations with Russia has been dismissed; a successor has yet to be named. This should be seen as a major victory for the protestors who have been on the streets for months calling for Yanukovich’s removal from power. But protesters say they will not leave the square until the government holds elections and political prisoners are freed. They want to see the revolution through to the end because they are concerned about those in Ukraine who do not want to see them succeed.

US National Security Advisor Susan Rice warned Russia on Sunday not to intervene in Ukraine following the success of Euromaidan. Russia has responded by saying that the United States should take its own advice and stay out of Ukraine’s internal affairs themselves. In reality both sides are guilty. Russia has threatened to withhold gas from Ukraine in order to pressure the country into withdrawing from signing a trade deal with the EU. Less coverage has been given to American involvement in support of Euromaidan protestors; a CIA agent in the Special Activities Division responsible for covert operations was arrested aiding protestors on February 20. This internal dispute over the future direction of Ukraine; that is, a decision between joining the European Union or the Customs Union of Kazakhstan, Belarus and Russia. However, it is clearly tempting for both sides to intervene in some way to see Ukraine in their sphere of influence. But what is best for Ukraine is to resolve its internal political conflict democratically without destroying the economy in the process.

Ukraine’s borders are a product of great power politics and its demographic makeup owes much to the policies of Joseph Stalin. Stalin opposed nationalism and re-arranged borders and forced population transfers throughout the Soviet Union in order to discourage national opposition to communism. But even before Stalin, Ukrainians were divided. In World War One Ukrainians fought on both sides, either for the Austrian or Russian Empires. Those who fought for the Austrian empire who were suspected of having any pro-Russian sentiment were harshly treated if not killed. After the war part of Ukraine was incorporated into Poland and another part of the nation became the Ukrainian Soviet Socialist Republic. After the Soviet invasion of Poland in 1939, Ukraine re-gained Eastern Galacia and Volhynia and a year later Stalin regained the northern and southern districts of Bessarabia, northern Bukovina and the Hertsa region from Romania. Then in 1954 Nikita Khrushchev added Crimean peninsula to Ukraine with its majority Russian population. As a consequence, Ukraine is divided between Western and Eastern oriented populations with different histories, as well as a substantial Russian population with strong ties to the Russian Federation. Due to these internal differences as well as rampant government corruption, Ukraine’s demography makes it prone to government protests. 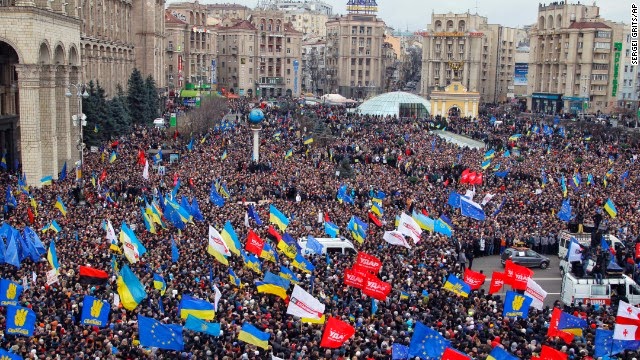 Euromaidan has had a major victory this past weekend, but in order to truly create representative democracy and to prevent people from having to protest for months in order to voice their concerns, Ukraine’s government needs to make meaningful structural changes. A devolution of power into regional or provincial authorities would have two major benefits for Ukraine. First, a federal system provides a mechanism for regions to send their own representative to negotiate their needs at the political level instead of resorting to protests. Secondly, federal systems discourage corruption by virtue of creating two layers of government for which corrupt businesses or oligarchs would need to bribe, and more people who would need to agree on a course of action thus increasing the opportunity cost of corruption as a business practice. Furthermore, under a federal system, it may be possible for different regions to establish a relationship with Russia or other individual countries on some of their own terms.