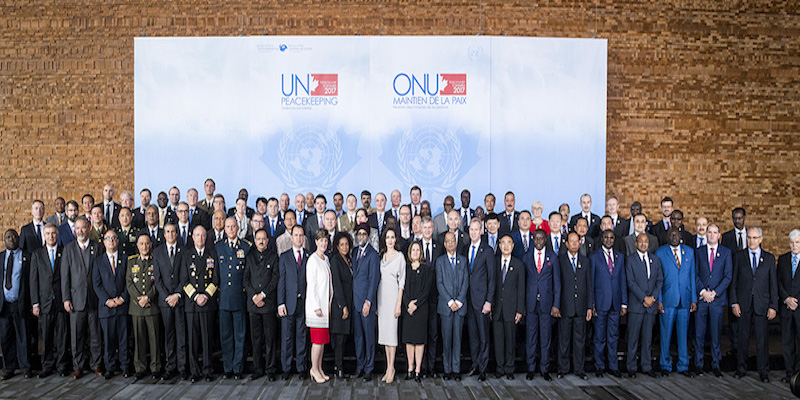 November 14th saw the culmination of a series of failures by the Liberal government to conduct a coherent and respectable foreign policy. A year and a Defence Policy have elapsed since Trudeau first pledged a Canadian contribution of an additional 600 soldiers and 150 police officers to peacekeeping missions. Trudeau’s recent promise of providing a rapid reaction force (200 soldiers) along with six helicopters, two transport aircraft and the necessary personnel did not quite match Canada’s earlier commitments. This promise was made at the 2017 UN Peacekeeping Defence Ministerial conference which Canada hosted, where, after much anticipation, specific proposals detailing the deployment of Canada’s contribution to peacekeeping were still not forthcoming. Cultivating the impression of some imminent announcement on a substantive Canadian contribution to a U.N. mission, Canada ultimately did not meet the expectations of key allies, while tarnishing its own tradition as a reliable peacekeeping partner.

Canada’s latest Defence Policy emphasized Canada was going to contribute to a more peaceful world through “peacekeeping” operations, with a concurrent shift away from expeditionary operations. Much effort was expended in explaining how such a shift was in accordance with Canadian “values,” which obligate Canada to act in the interests of international law and democracy. In the short term, this seemed to be a probable prospect, as Canada at the time was already engaged in discussions with the U.N. over which particular peacekeeping operation Canadian peacekeepers would be deployed to. Deteriorating geopolitical conditions in many parts of the world, particularly in Africa, meant that the U.N. has had no shortage of conflict areas where Canadian capabilities would prove useful.

Many U.N. officials initially expressed anticipation and later disparagement at Canada for consuming an inordinate amount of time to not arrive at a final decision. Growing frustration toward Canada’s peacekeeping contribution at this point was anonymously described by a U.N official in the following terms: “It has been difficult to get to this point, and we are all keen to get a meaningful contribution from Canada… we waited and waited and waited.” Similar sentiments from anonymous U.N. officials have featured in Canadian media outlets, and it is clear that Trudeau cannot claim Canada’s reputation internationally has not been tarnished as a result of Canada’s dilatory decision making.

Recall that Canada had never denied a shortage of potential U.N. peacekeeping operations for the country to participate in, and perhaps even lead. Canada has simply refused, to this day, to involve itself where it is needed most. A well known necessity for peacekeeping in Mali has not been adequately addressed for years, while Canada is also needed elsewhere too, including in South Sudan and Uganda. Instead of gathering the requisite domestic political support to allow for a sustained commitment to a U.N. peacekeeping mission (which would certainly improve Canada’s chances of a successful Security Council membership bid), Trudeau has continued postponing an announcement when he has already committed Canada to the cause.

An unflattering situation only worsened when Trudeau declared in Vancouver that Canada has effectively placed the responsibility for allocating its capabilities in the U.N.’s hands. Canada’s latest proposal sees it transfer decision making responsibility to the U.N. while retaining the final say over where its capabilities will ultimately be deployed. To the frustration of many, observers agree that talks between Canada and the U.N. over where Canadian peacekeepers will be deployed can take another nine months. Only the government knows why Canada did not approach the U.N. earlier to initiate these discussions, if it knew in advance that it did not want to select the location of its forces itself.

Canada’s recalcitrance in deploying peacekeepers to countries where a high risk of casualties exists, has by some western diplomats been attributed to Canada still being “traumatized” by its decade in Afghanistan. Unfortunately, Mali, Uganda, and other areas with high risk profiles are exactly where peacekeepers are needed the most. If Trudeau is going to uphold his election promise of continuing Canada’s prestigious history in peacekeeping, he must accept casualties as an associated risk of committing Canadian peacekeepers to missions.

It is important for foreign policy speeches, such as the one given by Minister Freeland earlier this year, to make clear to Canadians why the possible sacrifices inherent in peacekeeping operations are worth it. Without public support, no democratic government can hope to execute its designs, no matter how noble the cause. That the current Canadian government has so far made few visible attempts to take Canada’s international commitments responsibly gives little hope to those who see Canada’s international reputation being enhanced by a seat at the Security Council. By missing the opportunity to elevate its stature internationally, Canada risks concluding 2017 without having, as another U.N. official stated, “made a real contribution to peacekeeping.”

Photo: Delegates during Day 2 of the UN Peacekeeping Defence Ministerial via Government of Canada