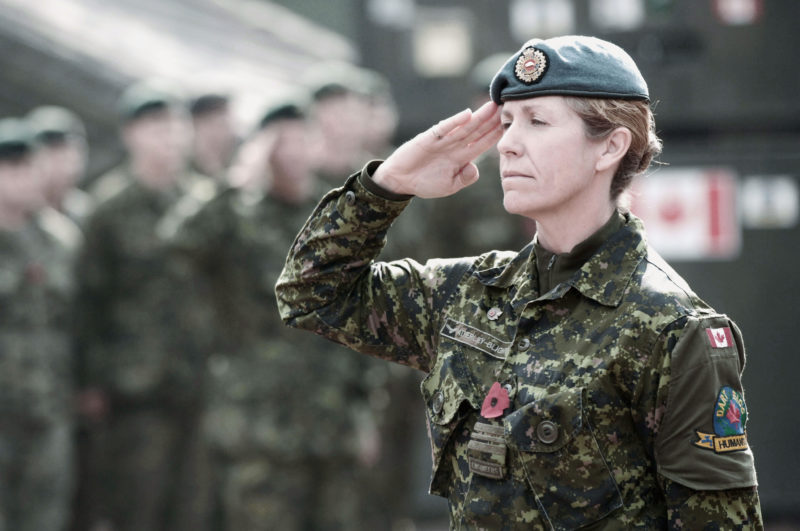 It’s no secret that there is a higher presence of men in the military than women. In 2016, the percentage of women in the Canadian Armed Forces was 3.9%. The imbalance is attributable to a variety of factors, some of which are sensible, and others that elude common sense. The federal government has acknowledged this disparity in gender representation in its latest defence policy, published in June 2017. In order to increase diversity within the Canadian Armed Forces, the government has launched a pilot program called, Women in Force. The Women in Force Program is focused on creating an environment that encourages women to make informed decisions about joining the military by understanding the different roles that exist within the larger organization.

The program’s first run in country has been very popular, attracting 300 applications for the 120 available spots. Two ten-day events in August kicked it off in Ontario and Quebec. The events demonstrated what military life looks like for a woman, including the rewards and challenges, and elucidates the importance of diversity within the military. A young woman from Brampton, Ontario has stated that the experience has been eye opening and rewarding as they learn about the basic skills required and the methods by which they can advance in rank. There are two more events to follow in October of 2017.

As one of the leaders of military gender integration, Canada has a responsibility to demonstrate that progress through diversity is possible. The number of female recruits has increased from 13% to 17% in the past two years, however the overall percentage of women in the military has increased only by 0.3% in the past year. According to Colonel Andre Demers, Commander, Canadian Forces Recruiting Group, this represents the first positive growth in more than ten years. Though a step in the right direction, the goal is to increase the number of women in the military by 1% annually for the next ten years to reach a goal of at least 25.1% representation by 2026. This falls in compliance with Canada’s Employment Equity Act and directives from the Chief of Defence Staff.

In Canada, the Canadian Armed Forces consults with the Defence Women’s Advisory Organization, which provides insight on the development of workplace policies that aid in furthering the goals of The Employment Equity Act. In addition, the Canadian Armed Forces also consults NATO allies through the NATO Committee on Gender Perspectives. Conceptualized in 1976, the committee has been critical in evaluating gender concerns and experiences and creating progressive policies and programs.

The Gender-Based Policy Analysis Plus (GBA+) has also greatly contributed to the conception of the defence policy. Created in 1996, as part of the United Nations’ Beijing Platform for Action, this analytical tool has been used to identify the diversity that exists and how it can create a stronger Canada. The GBA+ has been used for defence, education, health, and even large-scale procurement projects. Its latest usage has been in the defence policy’s increasing attraction to recruitment of retention of diverse groups of people.

One of the most pressing issues women face in the military is that of inappropriate sexual behaviour. Operation HONOUR was launched in 2015 in response to the Supreme Court Justice and External Review Authority report on sexual misconduct within the Canadian Armed Forces. The Canadian government took a large step forward in attempting to understand the sexualized culture that exists in the military and embedded Operation HONOUR’s core principles into every facet of the Canadian Armed Forces. Though Operation HONOUR has had some negative reception, with some soldiers dubbing it ‘Hop on Her’ the overall effect has been an increase in the number of women coming forward, and severe repercussions for those implicated in the cases. It’s certainly not perfect, but the awareness that is slowly engulfing the military is hard to escape.

The June 2017 defence policy highlights the intent to stay strong at home, secure in North America, and engaged in the world. According to the Canadian government, one way to do so is by increasing military effectiveness by diversifying its recruits. Captain Ian Grant, a member of the army’s LGTBQ community, has said that by having more people and diversity, there is a better perspective to be obtained.

The program is inspired by the United Nations Security Council Resolution 1325, which came to be in 2000. The resolution largely seeks to raise awareness of the important roles women play in society and to achieve a balance in equality. The principle facet of UNSCR 1325 that is extolled in the defence policy is “active and meaningful participation of women in peace and security activities.” The Trudeau government has recognized that women bring a new skillset to military operations that can broaden the effectiveness of a military. In Canada and in the rest of the world, women have reached high-ranking positions through hard work and determination.

An emphasis on the gendered ideologies that exist within and without the military, as well as a blatant push back against these ideas by highlighting the benefits of diversity within the military is a huge push in the world of defence.