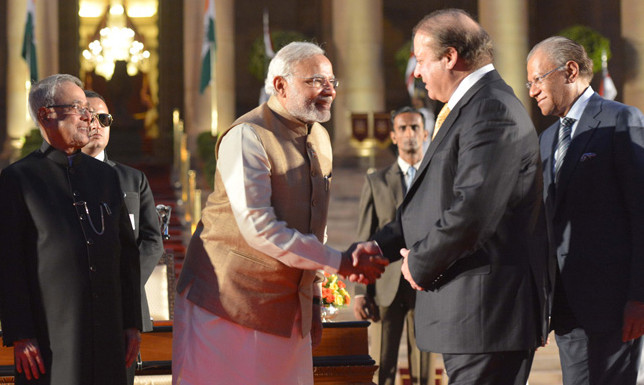 The election of Narendra Modi as the new Prime Minister of India in May 2014, sparked hopes for an uptick in diplomatic ties between India and Pakistan, moribund since the 2008 Mumbai terrorist attacks. Following the general elections, Prime Minister Modi invited Pakistan’s Prime Minister Nawaz Sharif to his inauguration ceremony in New Delhi, where the two exchanged handshakes. This marked the first time since 1947 that a leader from either state had agreed to attend such a ceremony and was notable in foreshadowing Narendra Modi’s use of symbolic gestures to progress and reassert Indian foreign policy.

Since that inauguration ceremony however, there have been a series of false starts between the two nuclear-armed neighbours. The Composite Peace Dialogue, initiated in early 2004 by Indian Prime Minister Atal Bihari Vajpayee and Pakistani General Pervez Musharraf, sought to normalize relations after decades of conflict over Kashmir. However, the relationship has been prone to repeated interruptions.

Into this situation comes the proxy war now underway in Afghanistan. With international forces withdrawn from the country and replaced by Operation Resolute Support, India seeks closer ties with Kabul while Pakistani insurgent and proxy groups like the Haqqani network and the Taliban target Indian interests and diplomatic missions in order to prevent the maturation of such ties. Even as recent news suggests a thaw between Islamabad and New Delhi, this does not appear to have filtered through to either state’s intelligence or military agencies which seem set on pursuing a test of wills in Afghanistan.

A relationship of rivals

Indo-Pakistani ties have, since partition in 1947, been marred by intense episodes of violence, with the disputed region of Kashmir being a major cause of tensions. India’s crushing 1971 defeat of Pakistan , which saw Bangladesh -then known as East Pakistan- break away from Islamabad’s governance continues to inform the present. These events, during which a 93,000 strong Pakistani army group surrendered to India, enshrined in Pakistan’s military and intelligence elite the belief, however unrealistic, that India seeks to surround and ultimately destroy Pakistan. This formed the principal impetus behind Prime Minister Zulfikar Ali Bhutto’s quest for nuclear weapons via the AQ Khan proliferation network. This campaign of international espionage and proliferation ultimately led to the Chagai-I nuclear tests in Baluchistan during the 1998-1999 Kargil crisis.

The import of nuclear weaponry into the arsenals of both India and Pakistan ensures that the Indian subcontinent remains one of the few regions where a limited or strategic nuclear exchange is feared, demonstrated by the heavily militarised border visible from the International Space Station. The addition of nuclear weapons however, has seen the conflict increasingly shift from conventional state-on-state violence to clashes involving non-state insurgent cells. In the last decade, India has fallen victim to a number of repeated terrorist attacks from Kashmiri separatist and Pakistani Islamist groups drawing financial and military support from within Pakistan’s military and intelligence establishment.

The 2008 Mumbai attacks continue to inform many Indians’ view of Pakistan, as the atrocity was committed by Lashkar-e-Taiba (LeT), a group widely suspected to be linked to Inter-State Intelligence (ISI), the principal intelligence agency within Pakistan. The ISI operates largely as a state within a state, free from civilian control. Through insurgent attacks, the ISI seeks to retain the strategic initiative, forcing New Delhi to focus on domestic security and keeping it on the defensive in regions such as Kashmir and Afghanistan. This can be seen in the recent insurgent attack on the Pathankot air base in Punjab, which forced New Delhi to shut down a vital strategic base for 3 days.

Yet, recent events in South Asia’s most important bilateral relationship suggest that ties may at long last be improving. On December 25, 2015, Prime Minister Modi made an unscheduled landing in Lahore to meet with his Pakistani counterpart Nawaz Sharif. In a symbolic gesture that Modi often performs, he warmly embraced Sharif, informing the media that he was bearing his ‘good will’ and birthday wishes for him.

The event was pure spectacle. The meeting marked the first time in over a decade that an Indian Prime Minister had travelled to Pakistan, although tellingly no joint communiqué or agreement was reached. The value of the meeting showcases the close personal ties between the leaders of two ostensibly hostile states. The visit highlighted how since his landslide 2014 election, Modi has based India’s foreign policy on pursuing close personal relationships with world leaders. This trend has extended to Prime Minister Shinzo Abe of Japan and President Barack Obama of the United States.

Modi’s visit to Lahore was the culmination of a series of meetings between India and Pakistan laying the groundwork for the event. National security advisors from both states had met in Bangkok in November 2015, while a brief meeting had occurred between Modi and Sharif on the fringes of the COP 21 climate change summit in Paris the same month. Finally on December 9, India and Pakistan agreed to resume their Composite Dialogue Process, suspended since the Mumbai terrorist attacks in 2008.

External factors are also known to have played a part in the warming of Indo-Pakistani ties. In November 2015, General Raheel Sharif, Chief of Army Staff of the Pakistan Army visited Washington D.C. It was reported that during this meeting, the United States pressured Pakistan’s military to allow the civilian leadership in Islamabad to resume the Composite Dialogue Process.

The impetus from Washington for Islamabad and New Delhi to resume dialogue follows a summer in which there have been repeated fire-fights between Pakistani and Indian military forces along the Line of Control in Kashmir, violating the 2004 ceasefire agreement. Tensions spiked between July and August 2015, with repeated shelling and sniping by both sides, including the shooting down of an Indian surveillance drone. With the focus of the United States being drawn in multiple directions, including tensions with Russia over Ukraine, the air campaign against Islamic State and concern over China’s assertiveness in the maritime spaces of the Asia-Pacific, an Indo-Pakistan crisis is the last thing the Obama administration needs.

The new ‘Great Game’ in Afghanistan

Nonetheless such a crisis is already underway in Afghanistan. Writing for the Brookings Institute in May 2013, William Dalrymple termed the relations between India, Pakistan and Afghanistan, ‘the Deadly Triangle’, arguing that the West had misunderstood the war in Afghanistan. Dalrymple claimed that instead of viewing the war with the Afghan Taliban through the prism of post-9/11 counter terrorism, it should instead be seen in the context of the strategic rivalry between India and Pakistan. The withdrawal of NATO-led international forces from Afghanistan has only increased this rivalry via proxy, as both sides seek influence over the other.

The pattern of Taliban attacks over the course of the last decade reveals an unmistakeable pattern when viewed in the context of Pakistan’s broader aim to undermine Indian influence in the Hindu Kush. The Indian consulate in Jalalabad was struck by hand grenades twice in 2007 and again in 2013. In 2008, the Indian embassy in Kabul was hit by a major suicide bombing which killed 60, including the defence attaché Brigadier Ravi Datt Mehta. The embassy was targeted by a further suicide bombing in 2009. As Afghanistan faced repeated insurgent attacks, increasing 38% in the year prior to NATO withdrawal, so too did India’s diplomatic missions. There were systematic attacks on Indian diplomatic and business interests throughout the period of 2010-2014. As recently as January 2016, Taliban fighters struck the Indian consulate in Mazar-i-Sharif.

In return, India’s response has been to pursue increasingly close ties with the Afghan government in Kabul, providing arms, including Mi-35 helicopter gunships, and training to the nascent Afghan National Security Forces (ANSF) amid fears of a renewed Taliban push on population centres. In November 2015, Afghanistan’s National Security Advisor, Hanif Atmar formally asked for India to massively increase its funding and counter-insurgency training as the United States increasingly reduced the funding for the ANSF. What we are now seeing is a New Delhi which rapidly eclipses Washington as Afghanistan’s capital of choice for assistance.

Pakistan has long sought to drive out India and instead intervene in Afghanistan’s internal affairs. In spite of apparently thawing tensions between the Modi and Sharif administrations, Afghanistan will continue to host the Indo-Pakistan proxy war.