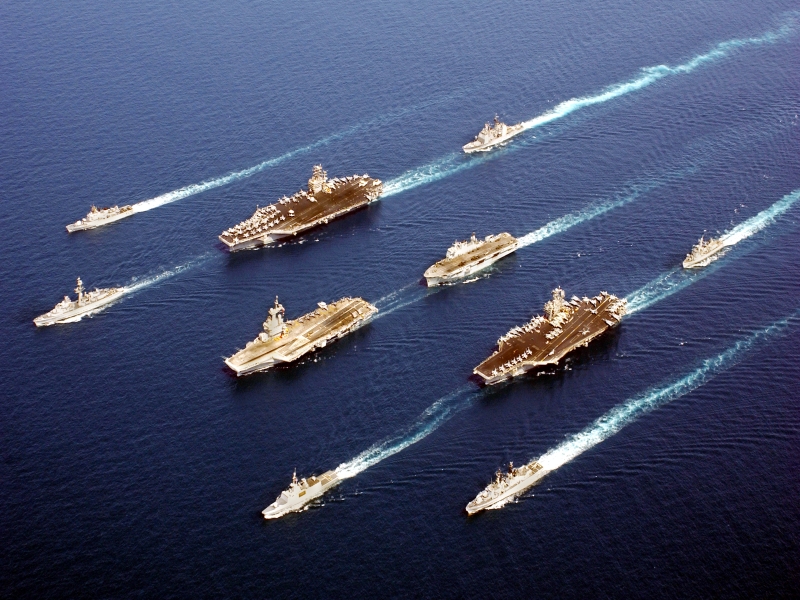 Since the end of the Second World War, the world has been in a period of globalization, resulting in increased trade and migration. Businesses have enjoyed a period of deregulation and reduction of trade barriers. However, the re-emergence of a multipolar international system has resulted in increased uncertainty, resulting in a transition to a wave of deglobalization. This shifting global landscape has challenged American hegemony as authoritarian states such as Russia and China continue to grow in power.

In the current international system, 85 percent of raw materials and manufactured goods are transported overseas. Tankers transport over half of the world’s oil. Ocean security is crucial for international trade. Over the past decade, rising powers such as Russia and China have demonstrated an increasing use of military power to influence the international system to best suit their objectives. The trend of increasing military power in Russia and China is of interest to the North Atlantic Treaty Organization (NATO).

Alongside their expansion of military power, China and Russia have demonstrated the intention of challenging the international order to achieve their foreign objectives through force. On February 15, 2018, Mr. Richard Fadden, the Former National Security Advisor to the Prime Minister (2015-16), told the Standing Committee of National Defence that Russia and China “don’t like the way the world is organized, and they’re constantly poking and prodding to try to increase their influence and change the balance of power on the planet.” The Standing Committee of National Defence have acknowledged China as a growing economic and military power. For the past few years China has been the second-largest spender on military, only behind the United States. China has been developing advanced weaponry at a rapid pace. The growth in China’s power has created an imbalance of power in Asia, threatening the security of Asia-Pacific NATO partners.

China has gone beyond its sovereign territory and has attempted to make territorial claims in the East and South China Seas. China has relied on intimidation, coercion and threats of force to increase control of these areas. China has deployed naval ships in these contested regions and now disrupts important global trade routes in the Pacific Ocean. This disruption has kickstarted a naval arms race in the Indo-Asia-Pacific region. Since 2014, China has engaged in the construction and militarization of artificial islands within the South China Sea, violating the United Nations Conventions on the Law of the Sea (UNCLOS). China has also laid claim to multiple islands in the East and South China Seas.

As polar ice continues to melt, new Arctic maritime trade routes begin to emerge. Arctic maritime routes, such as the Northwest Passage and Northern Sea Route have gained the attention of China. Analysts suggest that the Northwest passage can greatly reduce transportation costs in the future, with a voyage from Asia to Europe potentially reduced by 4000 kms. In January 2018, China declared the Norwest Passage and the Northern Sea routes as trade routes of interest through its Arctic Strategy—the Polar Silk Road. China has increased cooperation with Russia to gain access to the Northern Sea Route and has deployed naval ships in the Arctic, where China is also currently engaged in resource extraction. China’s ambitions in the region have increased tensions, leading to an increased naval buildup in multiple Arctic states.

Comprised of members from both sides of the Atlantic, NATO could be described as a maritime alliance, which helps guarantee freedom of movement between North America and Europe. With increasing threats at sea including piracy, a global increase of submarines, maritime terrorism and rearmament of naval forces, NATO’s role grows more vital. With the movement towards protectionist policies and the increasing arms races, the importance of maritime freedom and dominion becomes more vital for the world’s globalized economies.

Maritime security is crucial for trade. Today, 95% of trade is conducted through sea routes, 95% of Internet traffic travels through cables located under the sea, and 80% of hydrocarbons are shipped. At the same time, 80% of maritime trade is conducted through eight choke points around the world. Of these eight, the Red Sea, Mediterranean Sea, and the Black Sea are vital to NATO. Sea lane usage grows by 4.7% a year.

With rising global hostility, NATO’s role in ocean security grows more vital. Trade is essential at maintaining cooperation with partner countries; however, trade routes have become areas of interest to rising military powers. China’s rise has led to an imbalance of power in the Asian-Pacific region, disrupting trade and security. Pacific trade routes are disrupted as China aims to increase its influence over the East and South China Sea. Russia and China’s disruption in the Northern Sea Route threatens Arctic sovereignty and barricades emerging trade routes. Ocean security is essential not only to NATO countries, but also to non-member countries. It helps maintain cooperation and balance. Therefore, an expansion of NATO’s influence beyond the maritime is essential for NATO and global interests and security.