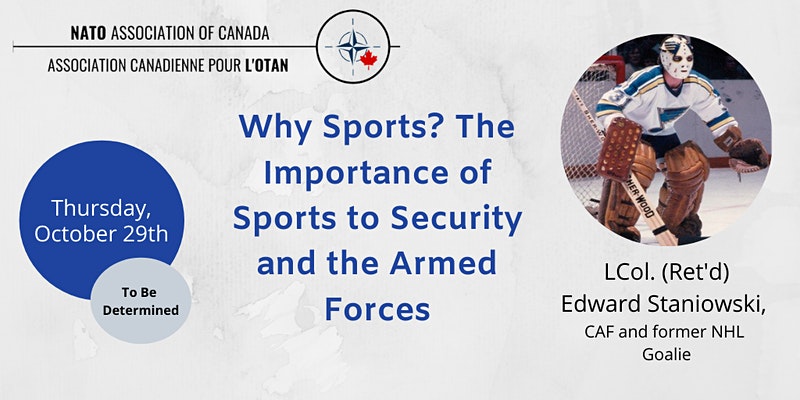 On Novmber 10, 2020, the NATO Association of Canada hosted a panel on the important role that sports play in security, cooperation, and rehabilitation. This panel hosted four dedicated speakers who discussed how they have used sports to integrate and interact with local populations and other armed forces, and how they have been used as a tool of soft-power diplomacy and to help injured service members recuperate.

Included in our panel is Lieutenant-Colonel (Ret’d) Edward Staiowski, who joined the Canadian Armed Forces after a 10 year professional hockey Career as a goalie sith the St.Louis Blues, Winnipeg Jets and Hartford Whalers.

With the Canadian Army, Lieutenant-Colonel Staniowski served on multiple operational deployments including United Nations / NATO missions in the Middle East (1991), Croatia (1992), Bosnia (1996), and as Canadian Contingent Commander to the International Military Advisory Team in Sierra Leone, West Africa (2004). His most recent overseas deployments were to Afghanistan with the International Stabilization Assistance Force (ISAF) in 2008 and 2010. Service with foreign allies has included training and operations with the armies of New Zealand, Australia, Germany, Great Britain, Sierra Leone, the Netherlands, Afghanistan and the United States.

Lieutenant-General Allen has commanded at multiple levels throughout her career including Ocer Commanding the National Systems Management Centre in Ottawa, at the Aerospace and Telecommunications Engineering Support Squadron in Trenton as well as the Canadian Forces Network Operations Centre and the Canadian Forces Information Operations Group.

Staff appointments have included the Operations Officer for the Information Protection Centre, Executive Assistant to the Vice-Chief of the Defence Staff, Director Support Operations in the Strategic Joint Staff. On promotion in 2014 to Brigadier- General, she assumed the post of Director General Defence Security at NDHQ. Lieutenant-General Allen also served as Director General Cyberspace, Director General Information Management Operations at NDHQ and Joint Force Cyber Component Commander. She was appointed Deputy Vice Chief of the Defence Staff after being promoted to Major-General in June 2018. She was promoted to the rank of Lieutenant-General in July 2020.

Since July 2020, Lieutenant-General Allen was appointed to serve as Military Representative of Canada to the NATO Military Committee in Brussels, Belgium.

Our third panelist Jay Feyko, is the National Manager of Soldier On, a Canadian Armed Forces program which contributes to the recovery of ill and injured serving members and Veterans by providing opportunities and resources through sport, recreational, and creative activities. Jay initially came to Soldier On as a serving Regular Force Major and continues to lead the program after medically transitioning out of uniform in 2016 after 22 years of service. Jay has overseen Soldier On’s expansion from coast to coast, support to over 6,500 ill/injured members including successful participation in high profile events such as the Soldier On Afghanistan Relay, South Pole expedition with Prince Harry, and Team Canada participation at all Invictus and Warrior Games.

Previously, Jay served proudly in various positions throughout the Canadian Armed Forces, initially as an Infantryman in The Royal Canadian Regiment then commissioning as an Infantry Officer in 1999, after completing his undergraduate degree at Carleton University. Deployments at home and abroad include: a sovereignty exercise above the Arctic Circle, Op ASSISTANCE – fighting the floods in Winnipeg (1997), Op PALLADIUM Roto 2 Bosnia/Herzegovina (1998), Op ATHENA Roto 0 – Afghanistan (2003/2004), support to Op PODIUM – 2010 Vancouver Olympics and Paralympics, and various other international exchanges and activities. During his service, he served with The Royal Canadian Regiment, Canadian Army, Canadian Armed Forces Special Operations Forces, and Chief Military Personnel Command.

In 2016, the Governor-General awarded Jay the Meritorious Service Medal for his continuous work with Soldier On and support to the ill/injured community. Other honours and awards include a Sacrifice Medal for wounds suffered as a direct result of hostile action in Afghanistan, Canadian Army Command Commendation for leading a rare Gold winning team at the UK Cambrian Patrol Competition, and Lieutenant General Vance Sword Award for Outstanding Leadership within The Royal Canadian Regiment.

Jay continues his work with Soldier On currently living in Ottawa with his wife and three kids. When he finds the time, he enjoys coaching and playing hockey, spending time at the cottage, and entertaining family and friends.

Our final panelist is Lieutenant-Colonel (LCol) Harding, who joined the Canadian Armed Forces (CAF) in 1998. She has served at various locations across Canada at the Tactical, Operational, Strategic and Joint levels in the Royal Canadian Navy, the Royal Canadian Air Force and in support of the Canadian Army. She has deployed to a NATO mission in Bosnia-Herzegovina, to France and Mali in support of a French Mission in Mali, to Haiti twice on multinational and UN missions, to Kuwait and to Iraq. She is currently serving at the Supreme Headquarters Allied Powers Europe (SHAPE) as the Canadian Deputy National Military Representative to SHAPE and as the Commanding Officer of the Formation Europe Canadians in Casteau/South-West (Europe).

LCol Harding has a Masters of Arts and a Masters of Defence Studies in addition to being a graduate of the Joint Command and Staff Program in Toronto, Ontario. She has been published in the book Believers in the Battlespace: Religion, Ideology and War. LCol Harding is also an avid sports fan, especially soccer and basketball, and is the Head Coach for the CAF Women’s CISM Basketball Team and an Assistant Coach for the SHAPE Men’s International Basketball Team. Happily married to a member of the Canadian Army and the proud mother of two, family hobbies include fitness, music and travel; especially when combined.