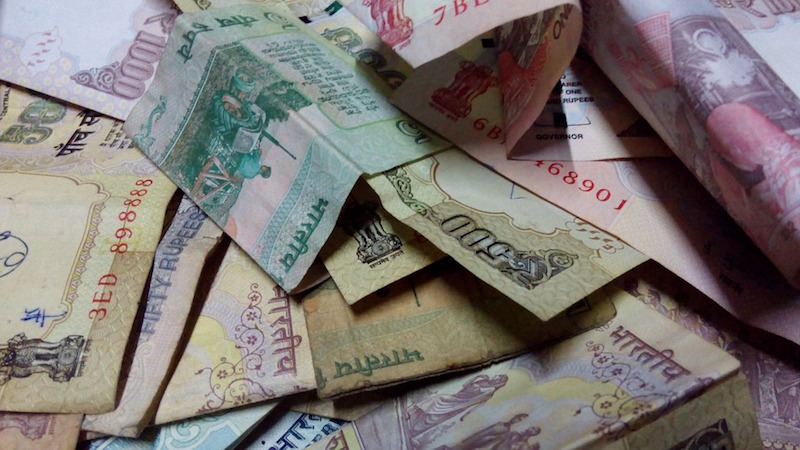 On Tuesday November 8, Narendra Modi, the Prime Minister of India announced that the Indian government will be discontinuing the largest denomination bills in circulation, the ₹500 and ₹1000 rupee notes. These notes represent approximately 86% of the money supply in circulation. This surprise motion caused millions of people to flock to their nearest banks to convert their money into lower denomination notes.

This move is aimed at bringing forward the “black money” holders who hold paper currency in order to evade taxes. According to government income tax records, only 20 million people had paid income taxes in 2013, encompassing approximately 1.6% of India’s population. Since this move, an estimated ₹2 trillion rupees have been declared into the economy. The government is also closely watching the deposits in bank accounts and investigating deposits exceeding ₹250,000 rupees, and checking income tax reports to see if there is a mismatch between the declared income and deposited cash. If caught, the tax evaders will be required to pay a penalty of 200% of the income evaded. “One of the primary objectives of cancellation of legal tender character of old series of Rs.500/- and Rs.1000/- notes was to check the menace of terror financing through counterfeit currency notes. The receipt of counterfeits/fake currency notes in Banks and Post Offices are, therefore, being monitored very closely,” said the Ministry of Finance in a press release late Saturday November 12.

An issue that has become evident since the recall of the rupee notes is the large amount of counterfeit money in circulation due to the easy duplication of the paper money. Indian Central Bank estimates that about ₹60 million rupees of illegal money is circulating in the market. Counterfeit money reduces the value of real money and perpetuates inflation because of the unaccounted increase in money supply. The losers in this situation are the middle business men who are not always reimbursed for the counterfeit money that is confiscated. By discontinuing an easily duplicated bill, Modi is able to reduce the amount of illegal money in circulation. In the meantime, Modi is working to introduce new ₹500 and ₹2000 rupee bills that will be harder to counterfeit.

This move also fuels money back into the economy causing a surge in government revenue due to an increase in the declared household incomes of Indian citizens. The government is then able to use this income to benefit the citizens by improving infrastructure and overall national development. Prime Minister Modi charts plans to improve quality of life in urban centres of India including state capitals and industrial hubs. He is also budgeting to improve the agricultural sector that contributes 17% of GDP of the Indian economy by developing resources available to farmers.

However, due to the sudden change in money supply, the economy will suffer from a temporary halt in economic growth. This is due to the fact that the citizens in India will be recovering from sudden uncertainty with respect to the value of the money that they hold. In some cases, the penalty of tax evasion will reduce household spending. On November 24, the rupee dropped to an all-time low of ₹68.855 rupees against the US dollar. “We expect that the weakness in the rupee could continue for the next three months and could test levels of 70.50 in the near term,” said Abhishek Goenka, the founder and CEO of India Forex Advisors.

Gold markets are also expected to see a temporary decline in demand because the vast majority of gold purchases were made with “black money”. The gold price has gone up temporarily since Modi’s announcement, however, due to customers exchanging their soon to be obsolete currency for gold. However, since the uncertainty of value of currency has gone up, analysts predict a drop in gold prices due reducing demand for luxury goods such as gold.

Nevertheless, the benefits of the discontinuing the rupee notes outweigh the temporary negative ramifications. The short term impacts mean that there will be a decrease in household spending and a slump in overall economic development. However, in the long term, India will benefit from higher government revenue and better economic conditions for reducing tax evasion and the amount of counterfeit currency in circulation.

The ability of the Indian economy to bounce back from this depends on stimulus activity by the government following the increase in government revenue. Spending the revenue generated on the economy on activities such as infrastructure improvement and the creation of jobs is the best way for India to bounce back from the impact of such a drastic money supply altering strategy.