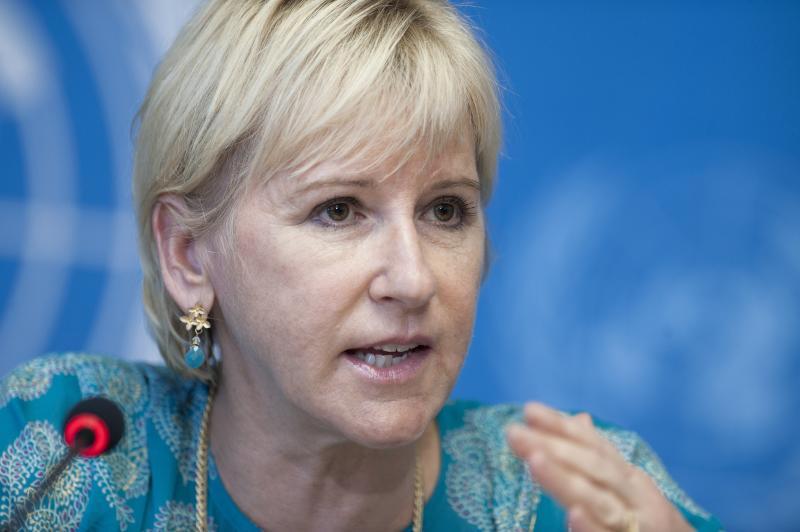 “The situation in the world calls for a feminist foreign policy that aims to strengthen women’s rights, representation and access to resources.” These are the words of Margot Wallstrom, the Swedish Minister of Foreign Affairs, speaking at a parliamentary debate in 2016. After the Socialist Party won the 2014 elections in Sweden and took control of the government, the country’s foreign policy doctrine was modified in an unprecedented way. Newly-appointed Wallstrom declared that it was time for Sweden to be a role model in an feminist focused policymaking era. She launched the feminist foreign policy agenda by stating the importance of including a gender perspective on peace and security matters.

Wallstrom argued that gender equality cannot be perceived as simply a women’s issue but that it should define the overall approach to Sweden’s foreign policy. Many country leaders, including Prime Minister Justin Trudeau, have announced their support for feminist-based decision making.

However, Margot Wallstrom is explicit about her ambition to establish Sweden as the only country in the world to adopt and perform a feminist foreign policy. Wallstrom’s goal may be unique and even slightly radical in its character, but Sweden’s prominent reputation abroad enhances the legitimacy of her policy initiative. The Scandinavian country is known as a humanitarian superpower and one of the top foreign policy influencers in the EU. Despite this reputation, it will still be a challenge to convince Wallstrom’s political constituents and the public, both abroad and at home, that a feminist approach is an inclusive approach.

Wallstrom’s attempts to leverage her foreign policy model has faced opposition both internally and abroad. The most vocal opposition came from Turkey and Saudi Arabia, but even some of the domestic Socialist party members have said that the initiative is idealistic and naive.

Discontent for such a policy has also been felt in the Swedish economy. IKEA, the Swedish furniture emporium, attempted to open its first store in Morocco in 2015 and got unexpectedly blocked. Some suggested that it was a deliberate move to show discontent with Sweden’s new foreign policy agenda. The same year, Margot Wallstrom got banned from attending a conference hosted by the Arab League after criticizing Saudi Arabia’s continuing subjugation of women’s rights.

While it may be difficult to precisely point out what parts of the feminist foreign policy approach spur cynicism or induce condemnation, the initiative is not welcomed by everyone. The New Yorker pointed out in their article “Who’s Afraid of a Feminist Foreign Policy” that Sweden is not known to be a state with hostile intentions. Therefore, the harsh reactions from Saudi Arabia and Turkey may indicate that countries do not support Sweden’s feminist foreign policy.

Have the prejudices against feminism in global affairs diminished?

Women’s rights are usually considered to be a policy area in of itself, rather than being directly related to global security and peace issues. The word “feminism” continues to elicit  contention in both developing and developed nations, which could imply that feminist foreign policy may have a difficult time paving its way into the international political agenda. Indeed, one of the main reasons people question Wallstrom’s foreign policy doctrine is the ambiguity regarding the word “feminism.” Diplomats tend to avoid using the term because it can evoke a sense of exclusion and opposition against men, which is exactly what Wallstrom wants to avoid. In some people’s minds, feminist politics embody a sense of female centrality and risks undermining a gender balanced approach.

Margot Wallstrom seeks to empower the term feminism and make sure that it is not solely attributed to women’s well-being, but to the well-being of the entire society that it concerns. Wallstrom has many feminist alliances on the international political stage. Hillary Clinton, a women’s right advocate, stated that “women’s rights are human rights.” Furthermore, last year when Justin Trudeau was asked why he wanted to appoint a gender-balanced cabinet he simply stated “it’s 2015,” implying that it was time gender parity became an important element of politics. Trudeau has also declared that the word feminism is nothing to be afraid of.

The Ministry of Foreign Affairs in Sweden suggested it was time gender equality be treated as a solution to societal problems and challenges, rather than be addressed as a separate policy issue. Whether-or-not a feminist label on the policy approach is harmful or beneficial to Swedish foreign policy remains a topic of debate. It remains to be seen if feminist foreign policy can improve gender equality in the realm of peace and security politics, where women’s rights continues to be a controversial topic. According to Wallstrom, gender equality must define government action in foreign policy and establish itself as a precondition for accomplishing a wider range of security, development and peace objectives. Without making a concrete impact, a feminist foreign policy model will risk being remembered solely as an audacious proposal.