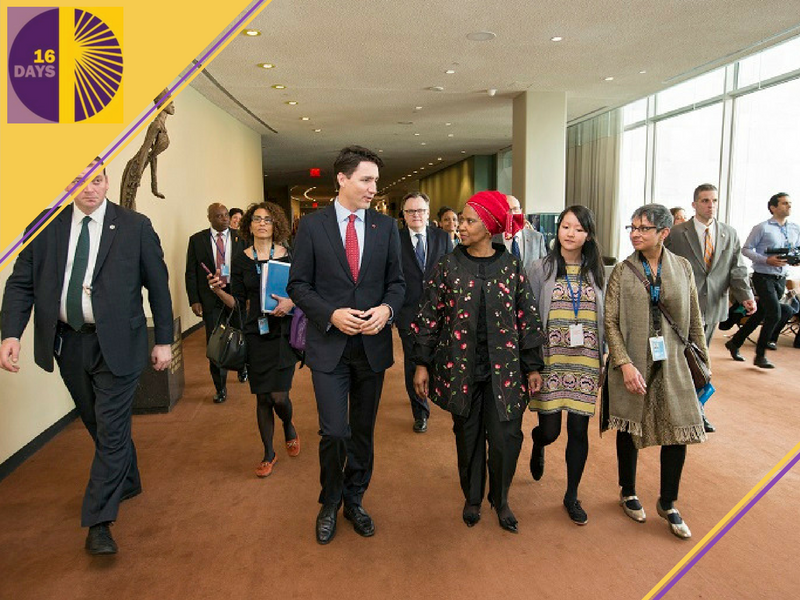 Canadian Prime Minister and self-professed feminist Justin Trudeau met with Liberian President Ellen Johnson Sirleaf on November 24 2016, holding a joint press conference on gender equality and the status of women. Trudeau also committed to funding a host of promising initiatives, pledging $10 million dollars to support UN Women in West Africa; $1.5 million to a UN-backed instrument to encourage the engagement of women in peace and security; and $1 million to the UNDP program for the 2017 Liberian elections, which encourages the participation of women in politics.

Despite these efforts abroad, Canada’s standing in international rankings on gender equality has been slipping. Canada fell five places to 35th on the World Economic Forum’s latest gender-gap report, behind Iceland, Rwanda, the Philippines, Slovenia, and Nicaragua, which have all ranked among the top ten. Moreover, Canada comes in 25th on the UN’s gender-inequality index, down from its coveted first place position in 1995. Last week, the United Nations released a report with concluding observations on Canada’s implementation of the International Covenant on the Elimination of All Forms of Discrimination Against Women.

The report applauded progress made since 2008, the last time the period report on CEDAW took place. The report was especially supportive of the creation of a Minister of Status of Women and also applauded the Zero Tolerance for Barbaric Cultural Practices Act (2015), the Protecting Canadians from Online Crime Act (2014), the Family Homes on Reserves and Matrimonial Interests or Rights Act (2014), the Protection of Communities and Exploited Persons Act (2014), and the Gender Equity in Indian Registration Act (2011).

In terms of constructive criticism, the CEDAW review highlighted the high incidences of violence against women, especially in relation to indigenous women. The report cited lenient penalties on perpetrators of gender-based violence as well as a lack of shelters or support services for women fleeing domestic violence. Even more worryingly, beyond resources, there seem to be a lack of statistic data on gender-based violence against women, especially regarding investigations, prosecutions, and convictions.

The CEDAW review commended the creation of a National Inquiry into Missing and Murdered Indigenous Women and Girls in 2015, which was suggested by the CEDAW review conducted in 2013. The review suggests the use of a human rights based approach, a mechanism for independent review, and a broader mandate that applies to the RCMP, provincial police, municipal police, and public complaints spanning federal, provincial, and municipal jurisdictions.

A ‘secret’ February 2015 status of women report obtained by CBC through an Access to Information request candidly stated that ‘Canada has no comprehensive national strategy to address violence against women, lagging behind several comparable countries, including the U.K., Ireland, Australia and New Zealand.’ Given the recent U.S. presidential election campaign, it is more important than ever that Canada continue to stand for tolerance, gender equality, and progressive values. Campaigns such as the 16 Days of Activism Against Gender-Based Violence play an important role in raising awareness and educating the public about gender-based violence.