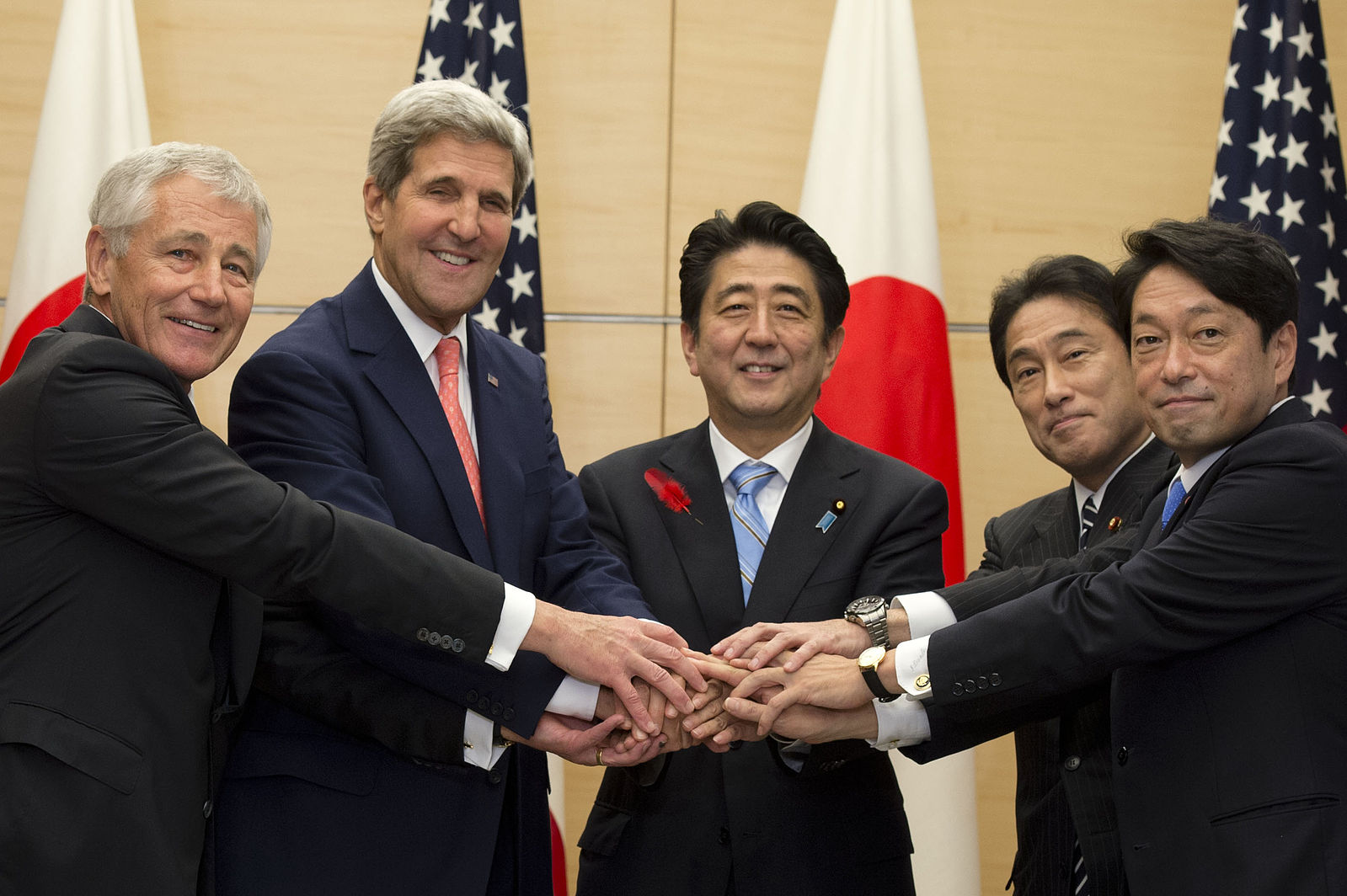 There have been few Japanese leaders in the last twenty years who have influenced the course of Japan’s foreign and defence policy as much as current Prime Minister Shinzo Abe. Following his re-election for a third term in December 2014, the reforms to the posture and the nature of Tokyo’s international engagement sought by Abe during his first tenure in 2006 are now secure in Japanese law. Under Abe, Japan has increasingly sought to engage with the East Asian region and influence its diplomatic, economic and military architecture to ensure that Tokyo’s interests are known and met in Asia’s capitals. This renewed effort on Japan’s part can be viewed in the context of the rise of China and the fears within Japan’s security and defence establishment that East Asia and the wider Pacific is increasingly being reordered around the power of Beijing.

The reforms pursued by Shinzo Abe have an important heritage, for he is viewed as the political and intellectual successor to Japan’s most hawkish leader in recent years: Prime Minister Junichiro Koizumi (2001-2006). After the 9/11 attacks, Koizumi surprised many in Japan by agreeing to support the U.S.-led invasion of Afghanistan, dispatching Maritime Self-Defence Force (JSDF) warships to the Indian Ocean to support in a logistical capacity and excise the ghosts of the ‘check book’ diplomacy fiasco during the 1991 Persian Gulf War.

Koizumi’s most controversial decision however, lies in sending 600 reconstruction troops to southern Iraq in February 2004, as part of the U.S.-led Multinational Force-Iraq. This was the first deployment of the JSDF to a combat zone since the Second World War. In an address to the Diet of Japan, Koizumi argued “We would not be meeting our responsibilities as a member of the international community, if we were to leave the contribution of personnel to other countries because of the possible danger”.

The sentiments behind this speech are important, as Shinzo Abe shares Koizumi’s worldview that Japan should play an international role, equal to its economic and military strength. The words spoken a decade ago by Koizumi on Iraq could just as easily have been spoken by Abe today on the South China Sea.

While transnational terrorism and the threat posed by 9/11-style attacks dominated Japan’s strategic concerns in the early 2000s, as demonstrated by documentation coming from Tokyo at the time, terrorism has increasingly been replaced by the increasing military threat presented by China’s modernisation of the People’s Liberation Army. The importance of this issue has grown exponentially since 2010, when ties between Tokyo and Beijing deteriorated over the nationalization of the Senkaku/Diaoyu island chain dispute.

The strategic backdrop of tensions in the East China Sea, stemming from repeated air and maritime violations by China, have provided the political impetus for Shinzo Abe’s amendments to Japan’s foreign and defence policy. His first move was to get the Diet to approve the creation of the National Security Council in November 2013 modelled on its American counterpart, with established hotlines to the United States and the United Kingdom, and with plans for further lines to Russia, Australia and China.

The key pillar for Abe’s reforms however lies in the concept of ‘collective self-defence’. Under Article 9 of the 1946 U.S.-drafted Japanese constitution, Japan is forbidden to wage war except in self-defence. Shinzo Abe’s reforms have changed this posture to enable Tokyo to use the JSDF to aid allies such the United States in the event of an attack, as well as providing greater flexibility in committing troops to UN peacekeeping operations. On September 17, 2015, the Diet passed the sweeping reforms into legislation in spite of widespread protests, hostile Japanese public opinion and scuffles within the Diet itself between government and opposition lawmakers.

Concurrent with the reforms, in 2014, Shinzo Abe increased Japan’s defence budget for the first time in 11 years, raising it to USD$48.7 billion. In December 2015, the Diet authorized a further increase of 1.5% for 2016. Despite these rises, Japan’s budget remains modest compared to China, where the defence spending rose by 12.2% reaching $130 billion in 2015, and the U.S. where President Barack Obama requested a budget of $585 billion in January 2016.

The JSDF under Shinzo Abe has begun modernizing and re-equipping its forces, nervously eyeing the asymmetry emerging between China and Japan’s military strength.  The 2015 defence budget, which has seen the largest increase in peacetime, is allowing the JSDF to modernize its Aegis-guided missile destroyers,  to establish an amphibious strike group with close ties to the U.S. Marine Corps, and purchase F-35A stealth fighters, 17 Osprey tilt rotor aircrafts and 52 amphibious assault vehicles.

Prior to the announcement of the U.S.-Japan defence guidelines in 2015, there existed a high degree of scepticism within the Abe administration over the commitment of the Obama administration to Japan’s territory in the East China Sea. Thus, it is revealing that under Abe, Japan has sought to strengthen ties with regional democracies including India and Australia. During his first term in 2006, Abe promoted the concept of a ‘quadrilateral security dialogue’ between Canberra, New Delhi, Tokyo and Washington. The concept underlying this alliance lies in balancing China’s rise. However, both the Labour government in Australia and the Congress-led coalition in India were skeptical and hesitant to enter into any agreement that could have been viewed as containment of Beijing.

Yet, since 2012, in the face of a far more assertive China in the East and South China Seas and amid tensions on the Sino-Indian border, Abe has once again pursued his vision of a quadrilateral security framework, though not in the form of a formal organisation. Rather, the Abe administration has pushed for closer ties on a bilateral basis. In the case of Australia, which has also expressed concern about China’s conduct in the South China Sea, Japan has recently been vying for a lucrative contract to build advanced diesel electric submarines for the Royal Australian Navy. Further to this military cooperation, Japan under Abe has for the first time sent JSDF personnel to the Talisman Sabre military exercises held in Australia.

Concerning India, Abe has sought to turn strong bilateral ties into a true strategic relationship, enjoying a strong personal rapport with Prime Minister Narendra Modi. Indo-Japanese relations have flourished in the last two years, with India seeking to attract high technology exports and investment from Tokyo including $15 billion high-speed trains and US-2 amphibious aircraft amongst others. Meanwhile, Japan deployed JSDF warships in 2014 and 2015 to the Indian Ocean, in order to participate in the Malabar naval exercises jointly hosted by India and which include treaty ally the United States.

Abe has also reached out to traditional U.S. allies beyond the Asia-Pacific. In 2014, he formalized Japan’s ties with NATO by concluding an individual partnership and cooperation program and signalled interest in joining a 12-nation NATO missile defence program. Abe has also deepened Japan’s bilateral defence ties with France and the United Kingdom by signing military equipment and technology transfer agreement with Paris and a defence equipment cooperation agreement with London.

For the first time since the Cold War, Royal Air Force Typhoons will conduct joint military exercises with the JSDF in a further signal of closer bilateral cooperation between two key U.S. allies.

There can be no questioning that Japan is as active now in foreign and security policy as at any other time in recent memory. The fact that Shinzo Abe has survived longer than a year as prime minister and has now influenced Japan’s foreign policy makes him a figure of true historical importance. The question that now should be asked is how China will respond and above all, where.