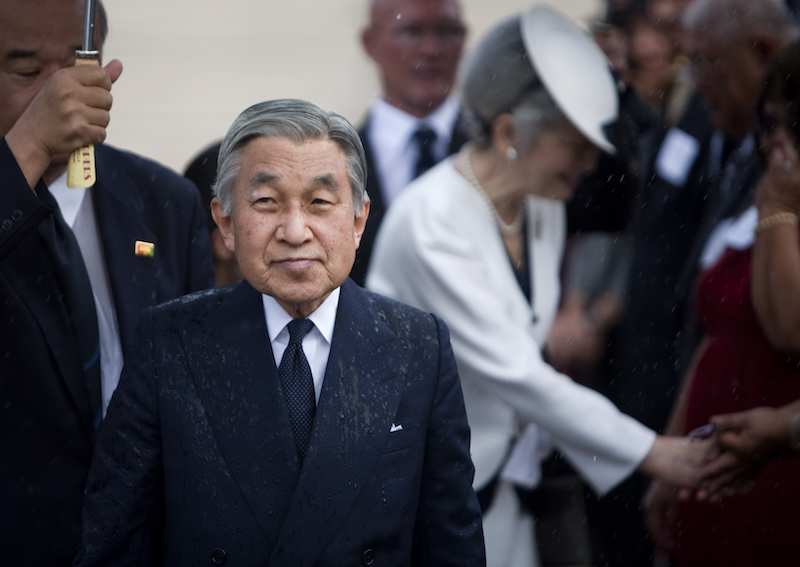 In a rare public address on August 8, 2016, Japanese Emperor Akihito hinted at a desire to abdicate in light of growing health concerns. The monarch, who followed a 200 year line of predecessors, will turn 83 in December.

Emperor Akihito said his health might prevent him in the future from carrying out his duty as the symbolic head of state. He had been undergoing treatment for prostate cancer,

Having sat on the throne since 1989, the emperor’s impending abdication would mark not only the end of a storied era in Japan, but a symbolic shift for the country, given his central role in Japanese culture.

Emperor Akihito represents a postwar Japan that’s committed to pacifism. After World War II, the US made an effort to establish Japan as a peaceful, friendly democracy, concerned that forcing the Japanese to confront their war crimes would lead them to retaliate and side with the Soviets.  US occupation played a pivotal role in Japan’s current culture: rather than dismantle the regime as it had for Nazi Germany, it kept the emperor and key figures in place, who simultaneously hoped to legitimize their own rule.

In Japan, the emperor is the head of state and the highest authority of the Shinto religion. Traditionally, the emperor was seen as divinity, a heavenly sovereign, with the imperial family believed to have been descended from gods. After the end of World War II, then Emperor Hirohito renounced his divine status as part of Japan’s surrender, after which he became a state symbol.

The role of the Emperor bridged two polarizing identities: a pacifist democracy and an imperialist power. The US allowed Japan to foster the understanding that its people and emperor were the innocent victims rather than willful perpetrators of the militarism the new regime now rejected. This pushed the nation to adopt a new democratic identity without addressing its old self-conception, with the role of the emperor becoming a symbol of liberalism and pacifism.

Akihito, who ascended to the throne after his father Hirohito’s passing in 1989, immediately sought to ease the contradiction between these two identities. Japanese history and identity remains a sensitive topic, and it’s deeply taboo to accuse Hirohito of bearing responsibility for World War II. When the Mayor of Nagasaki made this mistake, he was killed by an ultranationalist Kizumi Tajiri, though Emperor Akihito traveled to Nagasaki to show support for the mayor’s statements.

Akihito later made great strides in addressing other cultural taboos, such as acknowledging Japan’s indebtedness to Korean culture and showing regret for Japan’s wartime abuses abroad.
Since Japanese law does not provide for abdication, constitutional change and.parliamentary approval would be required for the emperor to stand down. But, opening discussion to abdication laws could spark a broader debate on the monarchy’s relationship with the state and the role of monarchy itself.

Though the emperor remains significant, he lacks political power. He has nonetheless a number of official duties, such as greeting foreign dignitaries and performing religious ceremonies. His ceremonial role is extremely significant to the Japanese public and contributes to public memory of Japan’s transformation.

If Emperor Akihito were to step down, it would be the first abdication of a Japanese emperor since since that of Kokaku in 1817. There are a number of implications to this. The Japanese monarchy is the oldest monarchy in the world, and the figure of the emperor is revered in Japan’s constitution.

Amending the law would revive another contentious issue: whether a woman can be a monarch. Akihito’s son, Naruhito, has a daughter, and his brother has the only son in the royal generation. Amending the law to allow abdication may also open debate on female monarchs – something that could be ill-received by Japan’s older, traditional population.

If the imperial family lost its symbolic presence, Japan’s official recount of history will never address its divided identity. The emperor plays a major role in Japan’s remembering its history, including an oppositional force to revisionist forces in Japanese government. For example, Akihito’s son Naruhito has called for Japan to remember war “correctly,” contrary to Prime Minister Shinzo Abe’s “Abe Statement” in 2015 which inadequately recognizes Japanese aggression during war.

Emperor Akihito’s presence in Japan, while only ceremonial, is demonstrative of Japanese history and culture today. If he were to abdicate, the role of the emperor would be changed forever – and the Japanese public would have to address its divided identity.