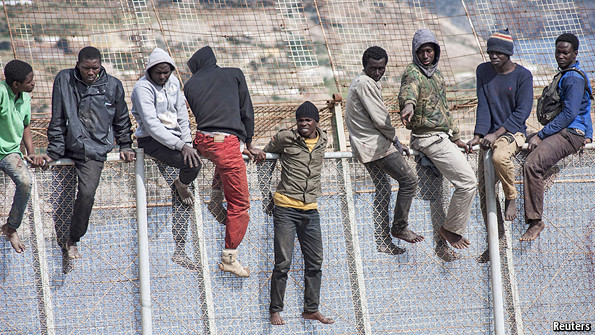 For the past decade there has been an increase in irregular migration from North Africa to Europe, which has turned into a growing policy concern for European states. The basic policy approach of Europe in reaction to this has been one of increasing militarization and securitization of its borders. The main response has been to erect fences, increase surveillance, increase maritime patrols in the Mediterranean Sea, and invest in the EU external border agency Frontex. There are several issues surrounding these policies with the most prominent being that the respect for human rights is often overshadowed by security.

Some of the main drivers of migration from North African countries to Europe have included unemployment, underemployment, wage differential between the North and South, as well as the attractiveness of Europe and the potential for a better life. Additionally, in Sub-Saharan Africa, migration to North Africa and then Europe is seen as a way of relieving the pressure on internal labour markets as well as generating a flow of remittances. On the other hand there have been large formal and informal labour markets for agricultural labour, construction, and other service jobs in many Southern European states which have become dependent on irregular migration labour.

The major problem for Europe is that while it was easy to initiate the flow of migrants, it has become rather difficult to stop this flow once started. The number of irregular migrants trying to cross the Mediterranean Sea each year has increased dramatically within the last decade and a half. From 2001-2010 the aggregate number of Arab emigrants to the OECD countries went from 3.5 to almost 5 million which is an increase of 42%, with 91% being destined to Europe, mostly Italy, Spain, and France. In the past few years this trend has continued with the numbers steadily growing each year. According to the United Nations Refugee Agency (UNHCR), a record 63,000 refugees have arrived by boat on Italian shores already this year, with the previous record being 62,000 in all of 2011. A further 65,000-120,000 Sub-Saharan Africans are estimated to enter the Maghreb (North West Africa) each year, where several tens of thousands try to cross the Mediterranean to Europe.

In terms of who is migrating, evidence suggests that irregular migration from Sub-Saharan Africa is diverse. For example the largest numbers of Sub-Saharan African migrants travelling through Morocco to enter Spain come from, Cote d’Ivoire, Cameroon, Democratic Republic of Congo, Gambia, Ghana, Guinea, Guinea-Bissau, Liberia, Mali, Nigeria, Mauritania, Senegal, and Sierra Leone. This would suggest that not only is the “idea” of travelling to Europe through Morocco established in most of West Africa, but also that irregular migration has a diverse origin within West Africa and is not limited to regions marked with armed conflict. This would suggest that addressing the root causes of migration flows could be potentially difficult. Europe in turn has not taken a “root cause” approach, rather they have taken an approach centred on security and militarization of their borders and of the Mediterranean Sea.

The most immediate response of the EU to the increasing number of irregular migrants reaching their borders has been to intensify border control and surveillance and mobilize the EU border agency Frontex. Frontex was established in 2004 and is essentially an EU external border agency which is tasked with assisting national border agencies through joint operations, training, risk analysis, and information sharing. Frontex has seen its operational budget skyrocket from 6.3 million euros in 2005, to 42 million in 2007, to 87 million in 2010, and peak at 93 million in 2012. The Mediterranean has now become one of the most militarized and heavily patrolled areas in the world.

There are several problems with the militarization and securitization of the EU’s borders. According to a leading expert in the subject, Hein De Haas, co-director of the International Migration Institute (IMI), the militarization of Southern European borders and the Mediterranean Sea has not stopped the flow of migration, rather it has led to the geographical diversification of overland and maritime migration routes. This not only increases the geographical area that European countries have to patrol, it has also made migration more costly and risky for migrants who have to take longer and more dangerous routes. The increasing militarization of the border and use of surveillance has also led to the professionalization of smuggling methods, with smugglers using larger and faster custom made boats, instead of the standard fishing boats of the past. Therefore it can be said that the very policies aimed at combating irregular migration are in fact a fundamental cause in the increasingly irregular character of migration across the Mediterranean.

The other major issue with this militaristic approach is that respect for human rights is often overshadowed by security. There have been numerous reports of military vessels failing to assist boats drifting in the Mediterranean or even using ‘push back’ tactics which essentially push the migrants back from where they came from not allowing them the opportunity to seek refugee status or asylum. Perhaps the most frightening number is that according to UNHCR some 800 people have died this year alone in the Mediterranean, up from a total of 600 in 2013, and 500 in 2012. These numbers point to the lack of coordination of European states in the Mediterranean Sea where the main focus is on securing borders with militaristic means, and forgetting about the respect for human rights.

Recently Italy has launched a search and rescue initiative called Operation Mare Nostrum, which has rescued more than 50,000 people since its launch in October 2013. Although most see this as a step in the right direction it is obviously not enough as hundreds of people are still dying every year in the Mediterranean. At the moment the EU is almost exclusively focused on strengthening its borders. There is a need to do more to create legal channels for asylum seekers and migrants. There is also a need for the EU to put in practice what they promote to the world in terms of respect for human rights, and start to put human rights before borders.

Ivanna Klympush-Tsintsadze, the Vice Prime Minister of Ukraine for European and Euro-Atlantic Integration, talks with Michele Di Leo about Ukraine’s transition to democracy, its hopes for an EU partnership, and the vital importance of NATO.