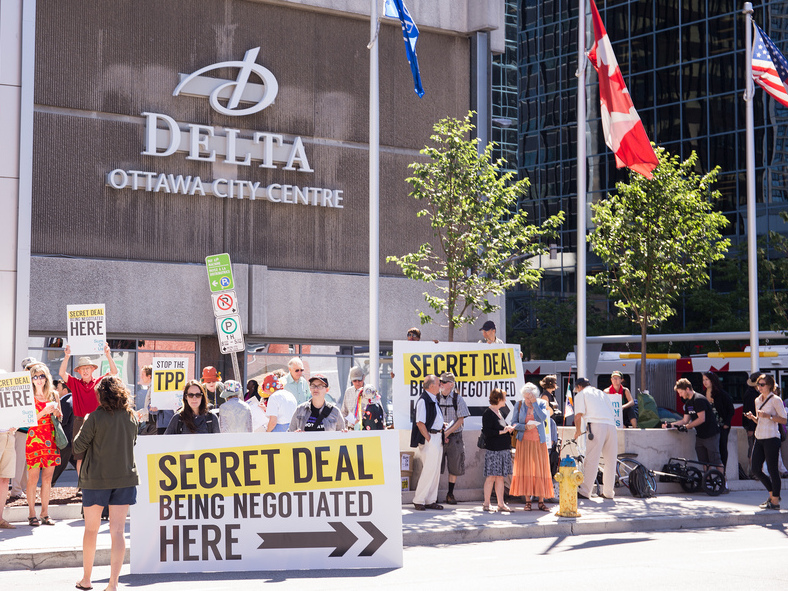 Chrystia Freeland, the Minister of International Trade, inherited a Conservative trade deal that was signed without public consultation. The deal is yet to be ratified – it will not come into force without the current government’s approval (there is still over a year until the ratification deadline expires).

Canada was late to the table, arriving after the ink on the 6000-page deal dried; after the American leadership and corporate interests drafted the Trans-Pacific Partnership (TPP). Joining the 12-country treaty was likely a defensive gambit for the Harper government, rather than about making substantive and transformative trade gains. Canada did not want to be left out. As part of the price of admission to consultation, Canada had to concede on TPP issues where they were alone in dissent. University of Ottawa Law Professor Michael Geist spoke at a TPP consultation hosted by Minister Freeland on June 15, 2016. There he said that senior Canadian officials were advised “Canada was at a disadvantage because of lack of communication and coordination between government officials.” There was a lack of transparency throughout negotiations; exacerbated by an ongoing national election campaign.

What did we agree to?

Many concerns over the deal stem from our automotive and dairy industries, and costs associated with increased healthcare.

The TPP would allow signatory nations on the Pacific side to export cars that are mostly made abroad without tariffs. Under current rules, cars built in North America must contain at least 62.5 per cent NAFTA content to avoid import duties. The TPP would lower that quota to 35 per cent for some parts, enabling car makers to source roughly two-thirds of their parts from lower-wage countries in the Pacific. Competing with countries that have lower labour laws would force Canada to either adopt the same practices or abandon Canadian automotive manufacturing.

Secondly, the dairy industry could find it hard to compete with American products that are pumped with hormones. Here the government would have to step in and fulfill the previous governments promise to compensate the dairy industry for losses sustained because of TPP. Not ratifying the TPP could save the Canadian government billions of dollars and ensure hormone-enhanced milk does not occupy grocery shelves. On the other hand, prices are likely to remain higher for Canadian consumers than other countries.

Finally, extending the duration of patents for corporations is problematic for the cost of pharmaceutical products. Canada already meets the international requisite of “life + 50 years” and the extension of patents to “life + 70” is not desirable. Increased patent laws would also increase the price of pharmaceutical care at a time when the healthcare system is burdened by costs associated with the ageing baby-boom generation.

ISDS clause of TPP – From Bad to Worse

American economist, Professor Joseph Stiglitz is against the TPP’s Investor State Dispute Settlement clause. He worries it could interfere with the ability of legislatures to regulate business or protect the environment by moving toward a low-carbon economy.

“It used to be the basic principle was polluter pay,” Stiglitz said in a recent interview. “If you damaged the environment, then you have to pay. Now if you pass a regulation that restricts ability to pollute or does something about climate change, you could be sued and could pay billions of dollars.”

As a model for the future, the economist recommends looking to the Comprehensive Economic and Trade Agreement which Canada is working out with Europeans. It has a much fairer method of dispute resolution that allows appeals from poor decisions and a greater ability for governments to legislate even if new rules may affect corporate bottom lines.

The new Canadian federal Minister for International Trade held a public consultation on Wednesday, June 15. The Rotman School of Business room was at capacity, with hundreds in attendance, and dozens, including the author, lining up for the questions/suggestions (but no answers) period.

To her credit, the Minister listened intently and used a copious amount of ink to record comments; her pen flowing without pause. The crowd was well informed and each consecutive person at the microphone unpacked concerns, pointing to specific aspects of the TPP.

Magnanimous and true to the democratic process of consultation, the Minister invited two vehement opponents of the deal.

Jerry Dias, the National President of Unifor, was on the panel representing 80,000 union members in manufacturing sector. He pointed out that the most recent countries with which Canada has signed fruitful trade deals were closed economies. The majority of trade exports already go to 97% of TPP markets, he continued. He sees no need to sign onto a poorly negotiated agreement in chase of the 3% remaining.

The only speaker in support of TPP, from CIBC, had unbounded enthusiasm for the deal. At one point in his allotted time the analyst asked a rhetorical question “Are we in or are we out” but the crowd took the opportunity to interject with a cantankerous “OUT!”

To Ratify or Not to Ratify?

TPP would become the biggest expansion of North American free trade. The potential for economic expansion is appealing on many levels but instead of building on NAFTA, using the ISDS provisions, it should start anew and take into account the concerns of citizens, and lessons learned by bureaucrats in previous administrations.
The main argument that TPP supporter Paul Krugman has for the deal is that it may raise wage levels in poor countries. That may be true but others say that should not be ratified on the backs of Western labour workers. This could lead to xenophobic attitudes one may see south of the border.

The C.D. Howe Institute published the first economic modelling on how the deal would affect Canada. The Institute found that the country stands to make “relatively modest” gains from the TPP, including a 0.02% increase to GDP by 2018 and a 0.08% boost by 2035 but it is hard to put much weight into any projections beyond five years.

In light of the inferior ISDS provisions, and uncertainty of impact in other industries, it would be beneficial if the government renegotiated some of the terms of the TPP and took their time in doing so.