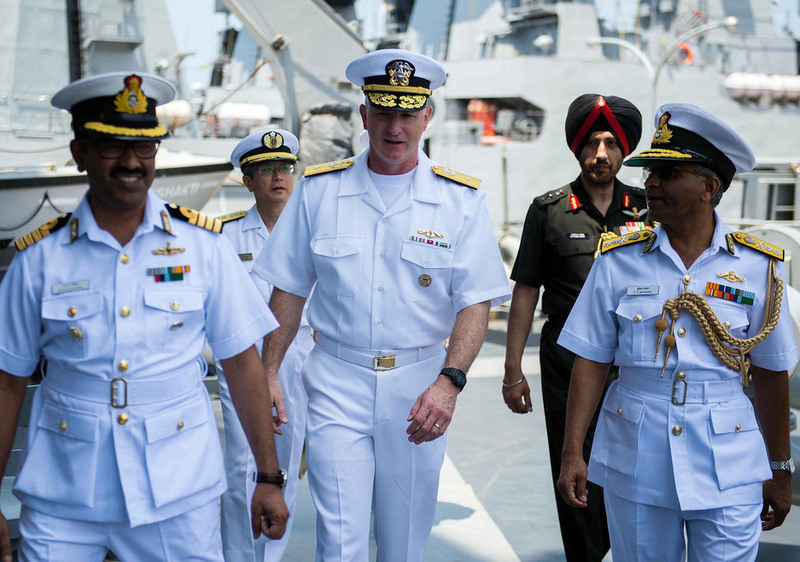 Implications of the Malabar 2016 naval exercise and the possibility of greater collaboration between the U.S., Japan, and India.

Malabar 2016 represents an important angle in Asia Pacific dynamics. Started in 1992 the U.S.-Indian naval exercise has this year included Japan. This comes on the heels of recent complications and diplomatic sparring between India and China. At the same time, New Delhi and Washington relations have been warming.

Though India remains ardently independent, the potential change in its foreign policy leaning towards greater cooperation with Japan and the United States presents the most credible counterbalance to China in the Pacific.

China’s economic rise has cast a shadow of expectation, anticipation, and unease about and within India; however, the country’s unwieldy political, territorial and ethnic complexities mars any hope of effecting major transformation, dashing hopes of replicating China’s development. Although India’s GDP growth is brisk at 7.3% for 2011-2015, China-India trade stood at US$ 70.25 billion in 2014, with a growing trade deficit for India.

Despite an enthusiasm on both sides of the border for mutual economic growth and the establishment of an Asian Century, the geopolitical rivalry has continued with increasing vigour.

Sino-Indian ties are evolving, reflecting the precipitous shifting of the power dynamics in China’s favour. This most evident is China’s ability to pull India’s neighbours further into Beijing’s orbit lock step with its expansion of its military presence in the South China Sea. Beijing’s influence, investment, and involvement in Sri Lanka has in the past been a sticking point, and despite protest and concern from India, a Chinese port project in Sri Lanka resumed February this year after previously being shelved.

Nepal has also been pulled toward Beijing’s orbit with a series of deals to increase transportation infrastructure and trade to the landlocked country.

India’s government has expressed its concern with the unilateral nature of China’s international development policies and its actions in the South China Sea similarly add to those concerns.

India has increased cooperation with Vietnam, providing financing, equipment and training to bolster its military. More than a tit-for-tat response to China’s extensive support of its ally, Pakistan, India has competing interests with China for the oil and gas deposits in the disputed waters off Vietnam. India, having signed an agreement with Vietnam to jointly locate and extract deposits, had its claim challenged when Beijing sent an oil rig into disputed waters protected by a large fleet of armed vessels in May 2014.

China’s challenge to lumbering India and its vested interest and support of Vietnam has brought India’s interests in line with those of Japan and the United States.

Japan is facing a similar situation in the East China Sea over the Senkaku / Diao Yu Islands. China’s claim to the potentially oil and gas-rich area surrounding the islands that have been administered by Japan has flared up intermittently over the last few years.

Tensions have only risen as Japan prepares to build defensive and monitoring facilities on nearby islands and China has sent a navy vessel into the region as a step up from the use of coast guard vessels to contest the region and its declaration of an Air Defense Identification Zone in the area.

In response, Japan’s government has sought to change its move away from its pacifist policies to assume a more assertive stance. Prime Minister Abe has made several policy changes including allowing the sale of military equipment to other countries and altered Japan’s constitution, despite protests at home, allowing the nation’s military to come to the aid of allies.

The changes have been welcomed by Washington, which is seeking greater support from allies in the region as it works to maintain an international legal framework for maritime sovereignty.

The U.S. and Japan, like India, are both been keen to help bolster Vietnam’s military forces. The U.S. has increased cooperation and recently lifted a total ban on arms sales; Japan has pledged to provide military equipment, including patrol vessels.

Three Leaders of the New Bloc

Collaboration between Japan, U.S. and India achieve the necessary counterbalance to China’s economic strength and regional military dominance in the East and South China Seas.

India’s reputation as a neutral nation, the size of its market, and geographical proximity to the region provides the U.S.  and Japan with the necessary muscle and, more importantly, the credibility to form a front adhering to  international law. India’s leadership on the issue moves the narrative beyond maintaining flagging U.S. power in the region.

Further collaboration and leadership from India could also help to woo additional countries who have otherwise been hesitant to take a more assertive stance in rebuking Chinese claims. South East Asian countries and in particular Indonesia, ASEAN’s largest member, and the world’s fourth most populous country will likely feel emboldened to confront Chinese assertions.