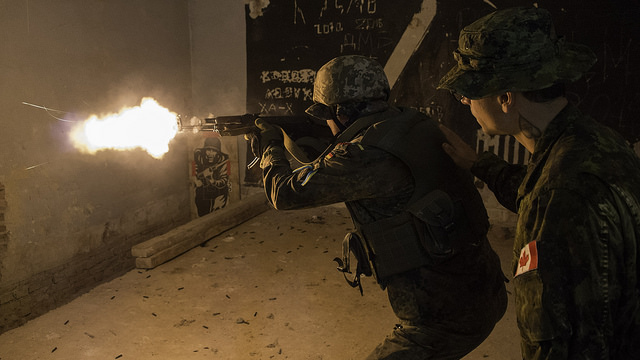 March 2017 will mark three years since the Russian Federation’s annexation of Crimea, an action which resulted in a prompt denunciation from countries around the world. In addition to collective economic sanctions placed on Russia by the United States, Canada, and the EU following the annexation, military training assistance and non-lethal aid have also been provided to the Ukrainian Armed Forces (UAF) in an effort to strengthen the military’s capabilities in case of a second wave of Russian aggression.

Operation UNIFIER, is a multinational joint support mission of Canada, the United States, and the United Kingdom. The operation includes approximately 200 Canadian Armed Forces (CAF) personnel who were deployed to assist in training operations with the UAF to maintain sovereignty, security and stability. According to the CAF official website, Canada’s main focus is on “tactical soldier training, which consists of; individual weapons training, marksmanship, tactical movement, explosive threat recognition, communication, survival in combat, and ethics training”. The Canadian soldiers participating in Operation UNIFIER, many of whom are veterans of the war in Afghanistan, are assisting UAF personnel, some coming directly from the front line in the Eastern Ukrainian region of Donbass.

Since the National Defense minister’s announcement to engage in military training for the UAF in December of 2014, the CAF’s Joint Task Force has trained over 2600 UAF personnel. Lieutenant-Colonel Jason Guiney, former Commander of Joint Task Force-Ukraine points to the differences in military culture as a key challenge presented under Operation UNIFIER. Guiney describes the UAF’s decision-making as centralized to the highest levels of command. The bureaucratic, top-heavy nature of the UAF is due largely to its Soviet roots in contrast to the CAF’s increasingly placing responsibilities in the hands of non-commission officers at the operational level. Canadian Prime Minister Justin Trudeau points out that Canada is not only teaching but also learning in Operation UNIFIER, by taking a “front row seat” in the conflict. This leads to a deeper understanding of Russian military tactics.

Guiney states that the CAF are dispersed to three locations in Ukraine. Roughly 150 Canadian soldiers are assisting in infantry and medical training at the International Peacekeeping and Security Centre (IPSC) in the city of Starychi, close to the border of Poland. Smaller numbers of CAF soldiers are located at the Ukrainian Ministry of Defense Demining Centre in Kamyanets-Podilsky, and a team of military police trainers is stationed in the Ukrainian capital, Kyiv.

It is important to highlight the unusual nature of the mission when discussing Operation UNIFIER. Unlike Operation REASSURANCE which engages in military exercises with NATO-allied forces in close proximity to the Russian border, Operation UNIFIER remains a sensitive situation for Ottawa as Ukraine is not a member of NATO although it does have a special relationship with NATO through the NATO-Ukraine Charter on a Distinctive Partnership signed in 1997. Ottawa has the unique challenge of carrying out an operation that is designed to deter future advancements of Russian separatists in Ukraine without arousing too much hostility from Moscow. Furthermore, Canada’s commitment to providing assistance to Ukraine is limited to less aggressive, non-lethal resources to ensure Canada does not engage in a proxy war with Russia.

Towards the end of June 2016, United States President Barrack Obama used his speech to the Canadian Parliament to call for more Canadian Involvement in NATO days before Trudeau’s trip to Ukraine, where he signed the Canada-Ukraine Free Trade Agreement (CUFTA) and visited Canadian military trainers in Western Ukraine. The visit came one day after Ukrainian President Petro Poroshenko’s request to lengthen the deployment of CAF trainers in Ukraine. Despite Trudeau’s expressed desire to stand by Ukraine, with less then three months left in the scheduled deployment of Operation UNIFIER, many are left wondering if Canada will extend the operation.