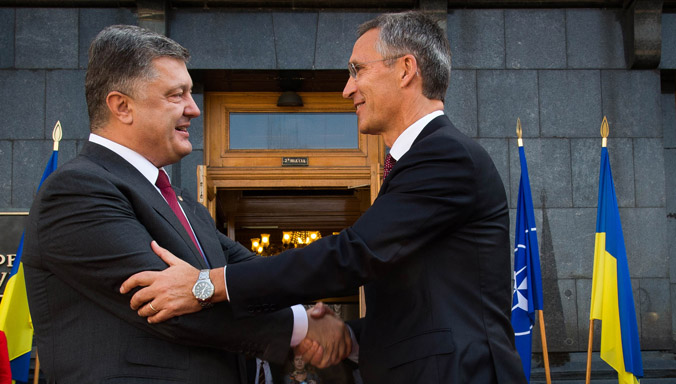 Should NATO expand eastwards? The issue has been widely debated ever since a group of Central and Eastern European countries, many of them formerly Soviet republics or satellites, expressed desire to join the Western Alliance. Ten years ago, despite concerns that NATO expansion towards the East would create additional tensions with Russia, which still regards the region as its sphere of influence, the Alliance accomplished the biggest enlargement in its history, welcoming seven Central and Eastern European countries into its fold.

Recent events in Ukraine have revived debates about regional security and cast new doubts on prospects of NATO’s future enlargement in Eastern Europe. In Ukraine’s new security doctrine, approved by the Ukrainian National Security Council this year, membership in NATO is singled out as a top priority that can safeguard the country’s sovereignty and territorial integrity. Although NATO member-states remain committed to the Open Door Policy, which means that all European nations can join, as long as they commit to meeting accession criteria, NATO’s eastward enlargement policy has been thrown into question, especially after the Bucharest Summit where neither Ukraine nor Georgia were offered Membership Action Plans, roadmaps that should eventually lead to full membership.

This essay therefore raises the question of why NATO’s previous enlargement scenario used for the Baltic States could not, at least in the foreseeable future, be adapted for Ukraine. It appears that the Baltic accession to NATO cannot be explained by solely pragmatic security interests; that due consideration must be given to the role of shared identities and common values which positioned the Baltic nations as members of the Western community, whereas Ukraine is still not fully perceived as one.

Baltic States As One of “Us”

In the constructivist view, as expressed by Frank Schimmelfennig, a German professor of European Politics, in his essay “NATO Enlargement: A Constructivist Explanation” NATO is a Western community founded on ideas and values of liberal democracy. This approach defines the Alliance as a collective identity-holder which delineates a clear distinction between “Us” and “Others.” The conception of who “We” are prescribes appropriate treatment of those regarded as one of “Us” or of the “Others.” Over the years it has existed, NATO has developed a specifically Western identity that is a product of both social practices and political order. This identity has defined NATO in opposition to the “Other” which largely coincided with what used to be called the “East,” or non-democratic countries.

Schimmelfennig claims that the expansion of NATO in Central and Eastern Europe cannot be convincingly explained without considering the role of ideas and shared identity. He notes that rationalist explanation is based on the assumption that enlargement should maximize utility for the organization; therefore, expansion is only possible when it brings greater benefits to both new and old members.

However, NATO’s “big-bang” enlargement in 2004, especially acceptance of the Baltic countries, did not follow only purely pragmatic security interests; instead, it rested on normative arguments like shared norms and identity. The Baltic States’ membership in NATO had been considered a mission impossible, because Russia had opposed any NATO expansion in Eastern Europe. Russia’s military doctrine, drafted in 1993, stated that the Alliance’s expansion to any countries around its borders represented a threat to Russia’s vital interests. Western elites were concerned that NATO’s expanding to the Baltic States would create geopolitical problems and additional tensions in relations with Russia. Maria Mälksoo, in an article “Enabling NATO Enlargement: Changing Constructions of the Baltic States” suggests that the Baltic countries were treated as second-tier post-communist countries whose membership in NATO would be “the red line [not] to cross with regard to Russia.”

The indefensibility of the Baltic countries was one more argument against NATO’s expanding eastwards. It seemed that implementing Article V would be too costly when it came to giving security guarantees to the Baltic States, because of possible conflicts with Russia. Opponents of the Baltic membership in NATO argued that their accession would impose additional security costs and even cause divisions within the Alliance. The opposition was such that, in the Madrid Summit of 1997, the Baltic countries were manifestly denied invitation to begin accession talks with NATO.

All these arguments were in sync with the rationalist approach to NATO expansion which, looking from a purely rationalist point of view, should never have included the Baltic States. However, the Prague Summit of 2002 finally extended the invitation for the three Baltic countries to begin accession talks with the Alliance. Rationalist assumptions cannot fully explain why this happened, because from a strategic point of view, the Baltic membership did raise security costs. Looking from the ideational point of view, however, NATO accepted countries that pursued the same values and norms as the Alliance. Whether the Baltic countries should join NATO was not only a geopolitical question (maintaining security), but also a social and cultural one. Therefore, the Allies had to balance two components of the reasoning behind admitting new countries, strategic and ideational, neither of which can be ignored when explaining NATO’s enlargement to Central and Eastern Europe.

Despite having been part of the Soviet Union, the three Baltic States never identified themselves as Eastern countries and had striven to preserve their Western identities. After re-establishing independence in 1991, the three Baltic countries insisted they were returning to Europe by demonstrating strong identification with Western norms and values. Identification with the West and Western behavioral norms was a long process, as the Baltic States had to prove their commitments by internalizing various institutional rules and practices. All three implemented significant reforms, which led to establishing democratic governance and accomplishing successful transitions to the market economy.

Identification with the West was followed by political, economic and cultural dissociation from the East, especially Russia. Return to Europe was the core foreign policy principle of the Baltic States throughout the post–Soviet era as they sought membership in NATO and the European Union. Active involvement in the Partnership for Peace program served as a social learning platform, where these countries proved their commitment to democratic principles and peace development that underpin NATO itself. Despite having spent decades under Communism, the three Baltic States succeeded in transforming themselves into market democracies – or one of “Us.”