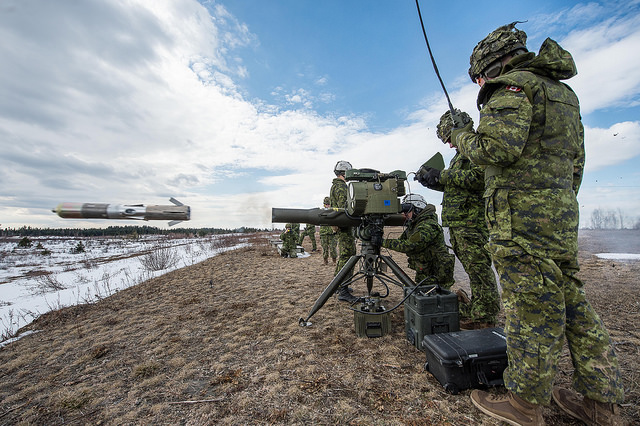 While Canada is often perceived as an idler within the NATO Alliance due to its reluctance to spend 2% of its GDP on defence, it is easy to forget that the Canadian Forces (CF) are of great value to NATO in ways that are not measurable in quantitative terms. As a matter of fact, the CF is a model in many aspects that European NATO members try to emulate.

Despite being a relatively small military power with a limited defence budget, Canada is able to dispatch military assets overseas under short notice in a cost-efficient manner thanks to an ever-growing network of OSHs scattered around the globe. OSHs are staging areas that facilitate the movement of personnel and equipment to an area of operations in the event of a crisis. As such, the basing fees a State must pay to a host country are lower for staging areas than permanent overseas military bases. Indeed, OSHs only house a small permanent military presence that can grow and contract depending on the regional security environment. Those outposts are created through a bilateral agreement between Canada and a host country. As of now, Ottawa has an OSH in Germany, Kuwait, and Jamaica enabling the timely deployment of CF in Europe, the Middle East, Latin America, and the Caribbean (LAC) in case a crisis erupts in those regions.

European countries with small defense budgets can draw inspiration from Canada’s OSH formula regarded as a cost-efficient way to project forces in far-flung areas. Moreover, it is worth mentioning that in the context of future NATO-led operations, those staging areas can be shared with multiple coalition partners in the future.

Within NATO, the CF rank high in regards to human capital investments. A prime example the ongoing effort in gender integration in line with the UN Security Council Resolution 1325 stressing the indispensable participation of women in maintaining peace and security. In 2014, 14.8% of service members in the CF were women making the CF the fifth most feminized armed force in NATO after Latvia (16.5%), the US (15.2%), Bulgaria (14.8%), and Hungary (14.6%).

Consequently, many European NATO members can learn a few tricks from Canada for greater gender integration within their respective armed forces.

3) Adaptability of the CF to all Contingencies

Given their small size, the CF must be ready to intervene in all possible contingencies such as conventional military aggression, internal instability susceptible of leading into civil war, natural disasters. For that matter, CF service members are provided with extensive training in combat know-how as well as peacekeeping skills involving mediation and conflict resolution technics, knowledge in the history and culture of a specific country. This diversified training regim provides Canadian troops with flexibility in regards to operations ranging from conventional war fighting to peacekeeping.

Another case in point is the Royal Canadian Air Force (RCAF) which has a unique air doctrine compared to other NATO members. Indeed, depending on a mission’s requirements, the flying branch can tailor an Air Expeditionary Wing (AEW) which is basically a modulable unit composed of diverse types of platforms taken from different squadrons across Canada. For example, during Operation Mobile in Libya, the AEW was tailored for airstrikes with CF-18 Hornets, CC-140 Polaris planes for Intelligence, Surveillance, and Reconnaissance (ISR), CC-150s and CC-130Ts as airborne tankers. In the Philippines following typhoon Haiyan, the AEW was tailored for disaster relief with CH-146 Griffon helicopters.

As such, with Canada as a model, European NATO members with small military forces and limited defense budgets can improve their militaries’ flexibility in conducting different types of operations by diversifying the training regimes and reforming their air force structures.

To more effectively manage potential foreign military incursions and natural disasters within Canada’s vast surface area, the CF divided the country into six Regional Joint Task Forces where all land, air, and naval assets are under one regional command.

Such a procedure can be replicated in Europe on a continental scale. Indeed, because of the divergent threat perceptions between Southern European countries preoccupied with terrorism emanating from the Middle East and Central/ Eastern European States focused on a resurgent Russia, regional European defense arrangements can be a solution to effectively counter the numerous threats Europe faces. Those initiatives could entail a joint structure where all land, naval and air assets are placed under one regional command.

To save precious money while improving readiness and interoperability, the CF ensures that their national military exercises coincide with those organized by NATO. In other words, Canada plugs its exercises with the Alliance’s. During NATO’s 2015 Trident Juncture exercise which was the biggest since the end of the Cold War, the CF linked their national and bi-annual JOINTEX exercise. Concretely, the Canadian Command set itself on European time for Trident Juncture’s duration.

That being said, European NATO members that have tight defense budgets can do the same. It will be a cost-effective method to optimize their readiness levels as well as their interoperability in the process. In a sense, such a procedure is a way to kill two birds with one stone.