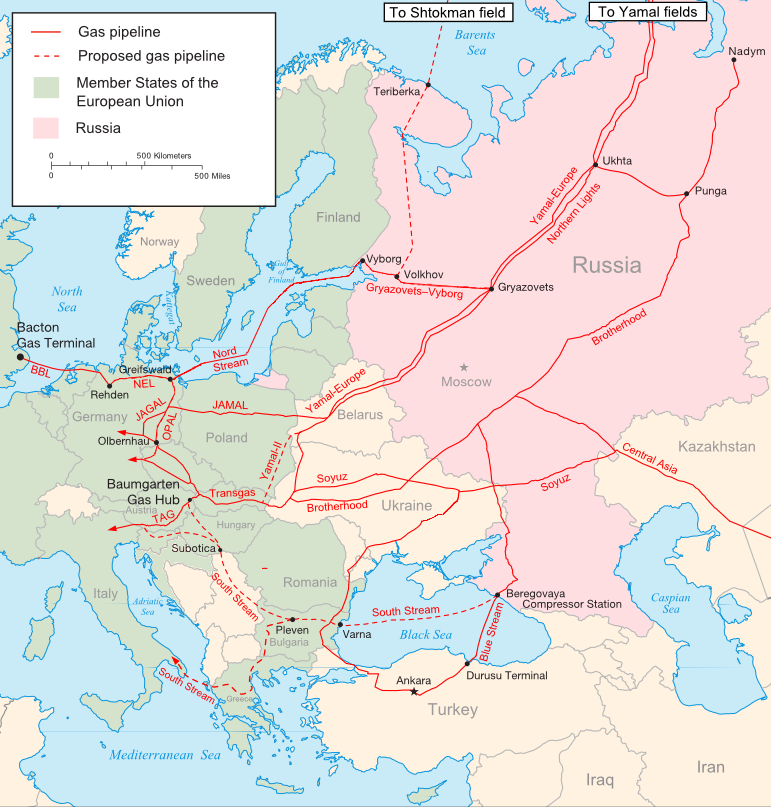 Following the Dutch discovery of the Groningen field, and British, Norwegian and Danish discoveries in the North Sea during the 1960s and 1970s, natural gas appeared to offer Europe an opportunity to decrease its dependence on Middle Eastern oil. However, demand for gas quickly outpaced supply, leading West European buyers increasingly to rely on Soviet imports in subsequent decades.

The security threat of import-reliance has been clear for decades. However, as surging energy demand has led to rising imports, policy-makers have failed to insulate the continent from threats to security of supply. Russian natural gas has been one of the more competitive, relatively clean energy sources. However, it carries geo-economic threats because of recurring political conflicts over supply and transit since the dissolution of the Soviet Union in 1991. Such problems with honouring contracts did not occur with the Soviet Union even at the most intense moments of Cold War crisis.

Europe is on the brink of another major supply disruption. The Soviet-era Bratstvo (“Brotherhood”) pipeline through Ukraine remains a major natural gas artery on which the European Union, including its NATO members, depends. The Ukrainian national oil and gas company Naftogaz and the Russian natural-gas monopoly Gazprom have failed to agree on terms of a new contract for Russian natural gas to transit Ukraine to the EU/NATO members. The current contract expires on the last day of 2019. Striking a deal is essential for both sides.

Naftogaz and Gazprom have fundamentally different objectives in the ongoing transit negotiations. These differences exacerbate the difficulties of reaching a new agreement. Gazprom would like a short-term, flexible contract. This would allow it to switch to alternative infrastructure as soon as it becomes available. Naftogaz prefers a longer commitment, ensuring a reliable flow of transit revenues. Prolonged negotiations could lead to the possibility that natural gas deliveries to Europe are suspended.

Moscow aims to terminate deliveries to Europe through Ukraine in order With a view toward terminating deliveries to Europe through Ukraine, in order to deprive Kyiv of transit revenues. Therefore it has been building other natural gas transmission infrastructure. The Nord Stream 2 pipeline now under construction is planned to complement the existing Nord Stream pipeline, which connects Russia with Germany under the Baltic Sea. The Turk Stream 2 pipeline is slated to land in Bulgaria from Russia. Neither of these, however, is likely to be completed before the current transit agreement with Ukraine expires.

Yet Gazprom risks further incentivizing Europe’s eventual replacement of natural gas as a fuel. Until now, EU policy-makers have touted natural gas as a “transition fuel”. They use this term to suggest that once coal and oil consumption has been switched to natural gas (in order to reduce emissions in the medium term), the EU could then phase out natural gas in a subsequent shift to a carbon-neutral society.

This question is not resolved. The strong push for renewables since the Paris Climate Accord, adopted by consensus in 2015, has led to a re-evaluation of the role of natural gas in a “decarbonized economy”. One study suggests that by 2035, “the substantial use of fossil fuels, including natural gas, within the EU’s energy system will be incompatible with the temperature commitments enshrined in the Paris Accord.” Proponents of the continued use of natural gas have suggested that it can be complemented and gradually substituted by “green gas”, a combination of bio-methane and hydrogen. “Decarbonized” forms of natural gas would allow it to become a “destination fuel” (i.e. one intended for continued consumption in the future), as opposed to just a transition fuel (i.e. one intended as a bridge to that future, then to be phased out).

Supply insecurity could push EU policy-makers to reconsider the natural gas industry’s argument that natural gas is a “destination fuel”. Russia’s market share in Europe has climbed to 37% in 2018, with 44% of the EU’s natural gas imports originating from Russia. Gazprom therefore plays a central role in these discussions. Meanwhile, the European Commission is holding wide consultations to determine the future role of natural gas. The results of these discussions are set to inform the EU’s forthcoming so-called “Gas Package 2020”. The measures spelt out there will set the long-term role of natural gas in EU energy policy.

The Europeans have few clear alternatives to Russian natural gas in the meantime. Both EU and Norwegian production is declining. Recent offshore discoveries in Romania, if developed and brought to market, would increase the energy security of several East Central European countries. However, developers have found the tax regime discouraging. They have been stalling the project; ExxonMobil has reportedly declared its intention to sell its stake to other players. The BRUA pipeline, which would deliver gas from Romania’s offshore fields to Central Europe, has also faced impediments. The countries involved in the project disagree over the pipeline’s route.

The EU has also to diversify its gas sources in order to enhance its security of supply. The Trans Adriatic Pipeline (TAP), which will deliver Azerbaijani natural gas to Italy, is almost complete. It began its first non-binding market test on 1 July. However, this project will bring little relief to Europe as a whole, since its capacity is less than one-tenth of the Bratstvo pipeline.

The EU’s imports of liquefied natural gas (LNG) have risen lately, encouraged by lower global natural gas prices. Among the factors explaining those prices are lower Asian demand due to a mild winter and increasing Japanese nuclear power generation. These may be one-off events that will not continue to be the case.

Chinese and Southeast Asian LNG demand is forecast to remain robust in the future, raising LNG prices overall, while global LNG investment is also slated to increase. If push comes to shove, however, some EU importers may be unable to the pay price premiums necessary to maintain diversification of sources, until U.S. shipments take off later in the next decade.

Despite the EU’s repeated undertakings to increase the security of its natural gas supply, it remains vulnerable to natural gas supply disruptions, particularly in view of its own shrinking production base. The current Kyiv-Moscow dispute is another important illustration how foreign energy imports pose a potential security threat.

John Szabó is a PhD Student at the Central European University’s Environmental Sciences and Policy Department and a Junior Research Fellow at the Institute of World Economics, Hungarian Academy of Sciences. He is working on his dissertation focusing on the (re-)regulation of the EU’s gas market, the ideologies guiding its developmental trajectory, and their implications for decarbonization. He has worked extensively in various entities of the energy sector, ranging from energy diplomacy, IOCs, to public utilities and consultancies. His field of work generally lies at the intersection of energy markets, ideologies, and climate change, to which he applies an interdisciplinary approach given his training and interests in economics, political science, international relations, sociology, and philosophy. View all posts by John Szabo →