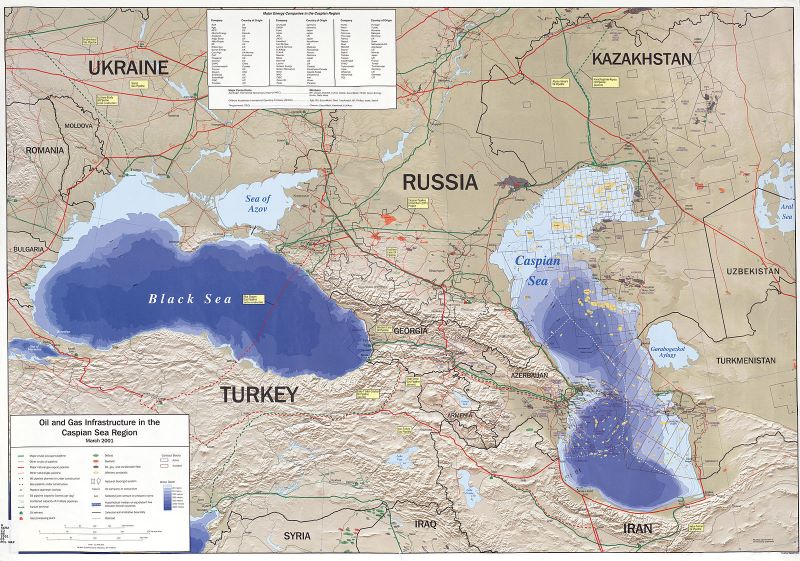 This article is an end-of-year review looking at the EU’s and Turkey’s position in three potential maritime conflict situations: first, the Caspian Sea basin; and then the Black Sea and East Mediterranean basins together.

The most significant development in Caspian Sea energy in 2018 was the signature of the Convention on the Status of the Caspian Sea (Caspian Convention). The Convention removes any last obstacles to the construction of the Trans-Caspian Gas Pipeline (TCGP) from Turkmenistan to Azerbaijan, from where the gas will be transmitted to Europe via the Southern Gas Corridor (South Caucasus Pipeline, SCP; Trans-Anatolian Natural Gas Pipeline, TANAP; and Trans-Adriatic Pipeline, TAP) and via its complementary route under the Black Sea (White Stream).

There is no possibility for Russia or Iran to delay the TCGP’s construction beyond the six months that they will have to submit comments on the engineering design, according to the Framework Convention for the Protection of the Marine Environment of the Caspian Sea (Tehran Convention) and its Protocol on Environmental Impact Assessment in a Transboundary Context (Moscow Protocol), to which the Caspian Convention makes direct reference.

There is no court to which to appeal of situations; indeed, of all the conflict-resolution modalities that are mentioned, juridical means are significantly omitted. The fact that the Convention is signed and these modalities are defined, means that recourse to the International Court Justice (ICJ) is out of the question. It was out of the question from the start, since there are littoral states of the Caspian Sea that do not recognize the ICJ’s compulsory jurisdiction.

The European Commission is supporting the engineering works for the TCGP. After delays in 2018, we should see progress on the ground during 2019.

In the East Mediterranean, the situation will evolve in a very sensitive way in 2019. In mid-December 2018, U.S. Assistant Secretary of State Wess Mitchell stated, concerning the disagreements over delimitation of national sectors in the East Mediterranean, that Turkey is in “a minority of one versus the rest of the world”, which “has a very clear, straightforward view” that the Exclusive Economic Zone (EEZ) claimed by the Republic of Cyprus is “grounded in international law”.

Having in mind a February incident in which Turkish naval vessels blocked a Saipem ship contracted to the Italian firm Eni to drill in Cypriot waters, Mitchell further stated that the U.S. would “not take a friendly view to any kind of harassment in Cyprus waters especially when U.S. ships are involved.”

He made these statements only days after Greece and the U.S. launched a new bilateral “strategic dialogue” focusing on regional defence, security, and energy issues, and only two weeks before the first shipment of American liquefied natural gas (LNG) is scheduled to arrive in Greece and the Revithoussa terminal. The U.S. is enhancing bilateral cooperation with each of the individual countries Cyprus, Greece, and Israel, while at the same time encouraging the three to cooperate among themselves.

“Greece, Cyprus and Israel are very important countries for the US because they are stable, democratic, Western allies”, Mitchell was quoted as saying. American interest in the East Mediterranean region increased in 2018, and the U.S. opposes the idea that gas from Russia’s TurkStream Two pipeline should cross Greece to Italy. Greek Prime Minister Alexis Tsipras reportedly welcomed such an idea at a recent meeting with Putin in Moscow.

It has meanwhile been confirmed that Cyprus, Greece, Israel, and Italy are scheduled to sign the Intergovernmental Agreement (IGA) for the EastMed pipeline in early 2019, even though the economics for commercializing the project remain very challenging.

The problem is that the EastMed Pipeline starting from the offshore of Israel and Cyprus, then going through Greece and eventually to Italy, cannot be realized on a commercial basis. Yet this project is presented as an alternative to the gas from Russia’s TurkStream Two crossing Greece, likewise to Italy. A more reasonable prospect is for Cyprus’s gas to reach Egypt’s under-utilized liquefaction terminals via undersea pipeline, for subsequent export to Europe and the world at large as LNG.

For this reason, the prospect of TurkStream Two making landfall in Bulgaria has again become a topic of discussion. A third possibility mentioned by Russian sources is for TurkStream Two to make landfall in Turkey itself, rather than in Bulgaria; however, this variant would increase the cost of gas transmission.

Russia would like it believed, that Russian gas would flow from Turkey to Bulgaria, Serbia, Hungary and Slovakia. But days after it claimed that deliveries to Bulgaria and Serbia would start in 2020, official Sofia said this would in 2021 at the earliest. Therefore, both the question of landfall for gas from TurkStream Two and its eventual consumers is still open. We have seen these kinds of pipeline propaganda wars in the past, for example around South Stream and around Nabucco, neither of which was finally realized.

It is possible that 2019 will give a hint about how the question will be resolved, but nothing should be taken for granted until actual construction begins. Indeed, actual construction does not always guarantee anything, if one recalls that the new party chief of the Christian Democratic Union in Germany, Annegret Kramp-Karrenbauer, has suggested that, even if NordStream Two is built, the volumes to be consumed from it remain to be defined. Only signed contracts deserve to be believed, but also, as the gas cut-offs to Ukraine and Europe in the winters of 2006 and 2009 illustrate, Russia has been known not to respect even signed contracts.