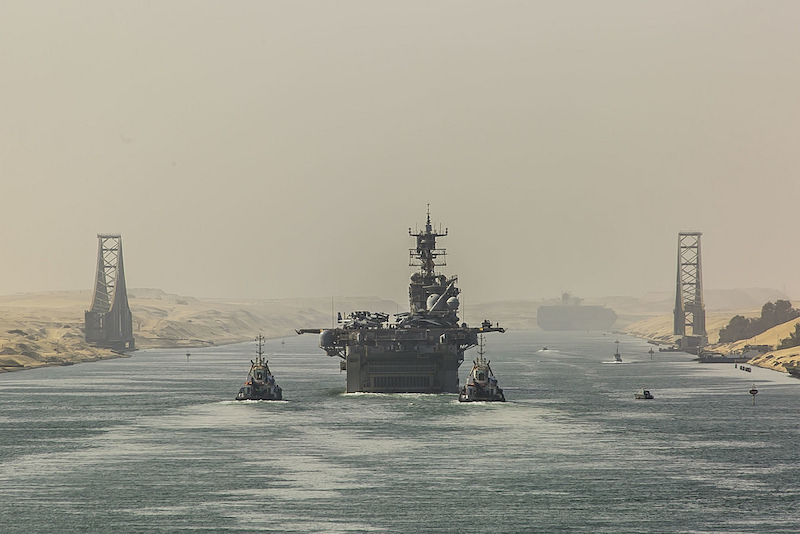 The Suez Canal is regaining its high strategic profile. Offshore oil and gas discoveries in the East Mediterranean basin drive this evolution, along with military developments in Syria and the heightened tension between NATO members Turkey and Greece. Egypt’s military analysts worry about possible military activity by the Turkish, Syrian and even Russian naval forces in case of an escalation around Cyprus, Syria or Israel. As a consequence, Egypt is seeking to expand its own naval and air forces.

At the same time, regional and global power-politics have put the Horn of Africa into play. Such once-remote areas as Djibouti, Somaliland and Eritrea are being integrated into the African and Middle Eastern investment strategies of China and India. Their plans for power projection into the region have led such Gulf Co-operation Council (GCC) countries as the United Arab Emirates (UAE) and Qatar, and also NATO member Turkey, to increase their own economic investments in the Horn countries. Strategic and military attention naturally follows.

So it happens that the Suez Canal is again coming to the centre of broader global military and strategic concern. The well-known maritime choke-point was greatly expanded in 2015 at a cost of US$8 billion (C$10.6 billion). More than 17,000 ships transited the canal in 2017, an increase of 11 percent over 2016. Traffic is growing further in 2018, although the current U.S.-China trade war and American sanctions on Iran account for some deceleration of the rate of growth.

In the first years of the twenty-first century, Egypt had brief success as a major exporter of liquefied natural gas (LNG), but the overthrow of President Hosni Mubarak and the instability of the short-lived Muslim Brotherhood-led government ended that. Total Egyptian gas production declined severely from a 2009 peak of 60 billion cubic metres per year (bcm/y) to 40 bcm/y in 2016. As a result, Cairo had to close its export-driven gas liquefaction plants. Its dire economic situation significantly worsened as a result, as oil and gas import bills increased. In 2015 Egypt become a net gas importer.

New startups natural gas development projects located offshore in the East Mediterranean basin near Egypt’s northern coast have significantly altered the situation. These include the West Nile Delta, Nooros, Atoll, and Zohr fields. The Zohr field in particular, where production has been fast-tracked, has reserves of about 850 bcm, and is expected to reach a production of more than 28 bcm/y by the end of 2019.

It is hardly an exaggeration to say that these developments have saved Egypt’s floundering economy. The country has been able to end its LNG imports since September 2018, plugging an important drain on the government budget. Egypt’s government debt to GDP ratio, which hit a record 103 percent of gross domestic product in the financial year 2016-17, has since fallen to 93 percent.

Egypt’s strong economy has propelled an important growth in domestic energy demand since 2009. Natural gas is increasingly used for power generation and petrochemical feed-stock. Natural gas consumption in Egypt has increased every year since at least 1990 (except for small declines in 2013-14) and is up 19 percent from 2009, the year of peak domestic production.

That major gas discoveries offshore from the Nile Delta may have reconfigured the regional energy map, is therefore no surprise. The offshore gas production is already fully supplying local demand. As a consequence of the Italian giant Eni’s enormous gas strike in the offshore Zohr field, and several subsequent positive results by BP, Shell and others, Egypt plans to restart LNG exports in coming months.

New discoveries expected to come on-stream would supply its under-utilized gas liquefaction plants in Damietta and Idku. Cairo has set itself the ambitious goal of becoming a regional energy hub, targeting European markets with the support of other offshore developments, mainly in Israeli and Cypriot waters.

Egypt’s success stories have attracted not only Western oil and gas companies. Russian, Arab, and several Asian oil and gas companies have also shown growing interest, although this has not yet translated into a major presence. The Russian oil company Rosneft has acquired a major stake in the Eni-led offshore natural-gas Zohr concession, acquiring it after Egypt’s support for the Qatar boycott led to the end of Qatari participation.

The Abu Dhabi–based oil company Mubadala Petroleum has also entered the fray. It has recently signed with Eni an agreement by which the Emiratis will acquire a 20 percent stake in the Nour North Sinai Offshore Area concession. This agreement is a sign confirming that GCC members seek to increase their investments in Egypt. They are moving in this direction not just for the economic gain but also to solidify their growing geopolitical and military-economic co-operation with Egypt, the largest Arab military and economic power.

Despite an overall perspective for the future that promises to be very bright, Egypt still encounters obstacles and threats. Opening up existing and potential oil and gas reserves offshore in the Red Sea and the East Mediterranean, as well as onshore in the Western Desert and Upper Egypt, will still require immense investments. Potential security problems are also present: a major concern onshore is that third parties might threaten the growing pipeline infrastructure. This is especially so, in and around the Suez Canal area and the Sinai Desert generally.

Still, with an overall anticipated gas production of 67 bcm/y, Cairo does expect to be able to export LNG again very soon. An integrated gas export strategy, led by Egypt and Israel, and supported by Cyprus, will bolster Egypt’s regional geo-economic and military position. Deals already signed with Israel and Cyprus provide that that Israeli and Cypriot gas production will be fed into the liquefaction infrastructure in Egypt’s Nile Delta. An offshore gas pipeline is being discussed linking all three countries.

In September 2018 Cyprus and Egypt signed a pipeline deal to bring offshore Cypriot gas to Egypt. Cairo also has signed a joint supply deal with Israel involving the latter’s offshore production from the Leviathan and Tamar deposits. Egypt just signed a major agreement, including a US$15 billion (C$19.9 billion) gas supply bargain, with a U.S.-Israeli consortium.

This last agreement plans for some 64 bcm of gas pumped in from the Israeli fields over 10 years. All these developments demonstrate how East Mediterranean energy is becoming more important at the same time as the energy and security interests of NATO and the EU have come under threat from the Syrian civil war and the emergence of proxy military groups and factions in the region.

Egypt has historically been a key geographic intermediary in global power-politics. It was a bridge between England and the British Empire in India. It is now now the main maritime sea route between Europe and Asia. Egypt still identifies its geopolitical interests strongly with those of NATO and the Western world.

Today, however, there is occurring an unprecedented military buildup (also involving such new players as China, Turkey, Qatar, the UAE and even Iran) in the strategically connected regions of Horn of Africa, Sudan and the East Mediterranean basin. The profile of that emerging broad meta-region is only heightened by the increased significance of energy resources on the global geo-economic agenda.

The Suez Canal, Red Sea littoral and indeed the whole of Egypt are thus becoming central to the well-being of the populations of the NATO members and, strategically, to the organization itself. The prospect of East Mediterranean energy, including Egyptian LNG, likewise supports the EU’s quest for non-Russian supplies of natural gas.

Cyril Widdershoven is Founder and Director of VEROCY, a strategic foresight and development gateway for asset and resource value-management, and new international investments, in the Middle East and North Africa (MENA). A Middle East specialist in geopolitics, he focuses on energy, sovereign wealth funds, defence and geopolitical developments across the whole area. He has been heavily involved in MENA oil and gas sectors throughout his career. He has been principal consultant at Capgemini Consulting, senior manager for oil and gas at Deloitte Financial Advisory Services and manager of the oil and gas department in the equity and bond markets division at Financiele Diensten Amsterdam. He has lived and worked in Egypt, Lebanon, Jordan, Sudan, Iraq and the UAE, and also taken on extended projects for clients in Oman, Iran, Syria, Tunisia and Turkey.

Cover Image: The USS Iwo Jima passes through the Suez Canal in March, 2018, part of the U.S. Fifth Fleet responsible for security of marine navigation routes in the Red Sea and Persian Gulf. Photo taken by Staff Sergeant Dengrier Baez, released by the United States Navy via Flickr.