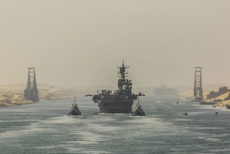 The Arab Spring threw a wrench into Egypt’s promising liquified natural gas (LNG) industry. Now, with stability returned to that country and the discovery of new gas deposits in the Nile littoral, Egypt is poised to become a major source of energy to the E.U. market. As auspicious as this sounds, it raises the stakes in an already volatile region marked by militarization and beset by inter-state strife and transcontinental tension.

The continuing news about the Syrian Civil War tends to obscure the emergence of the East Mediterranean basin as a potentially significant energy-producing region,   where military clashes in coming months cannot be ruled out. Recent energy-related success stories in the region include Egypt’s offshore gas discoveries and the continuing growth of Israel’s offshore gas projects, […]