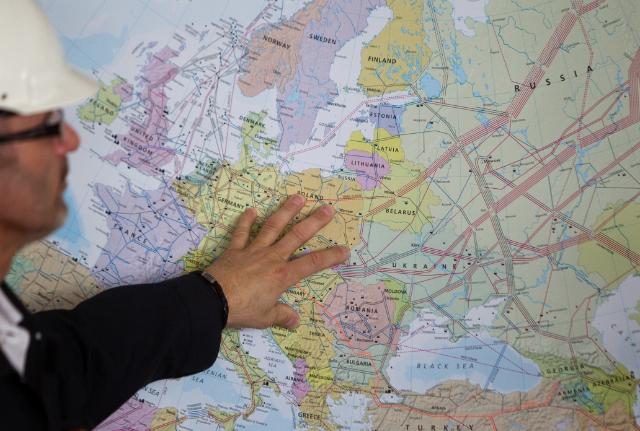 Such an objective particularly concerns South Eastern Europe (SEE) and Central and Eastern Europe (CEE), where market attitude distinctly differs from the northwestern model. Trans-boundary infrastructure is considered a catalyst in fostering integration in this mosaic of member-states and membership hopefuls, bringing about a sufficient level of gas supply security.

This article examines the projects that will determine the practicality of the Southern Gas Corridor (SGC), from the Caspian Sea region westward.

It argues that, given the diffusion of the internal energy market precepts to the Energy Community, installing requisite capacity for natural-gas transmission along vertical (south-north) and horizontal (east-west) axes will anchor the SEE and CEE transit countries more solidly in the European Union (EU) and, prospectively, NATO.

This discussion takes on added importance in view of what drove the 2013 Final Investment Decision (FID) on the Trans-Adriatic Pipeline (TAP), over rival SGC extensions: its ability to improve the domestic gas market in the Western Balkans and to diversify sources of supply along a vertical zone, from Greece to Ukraine.

These goals will be realized through swaps and reverse flows, thanks to a web of pipelines to be constructed to the north of TAP. These include, among others, the Interconnector Greece-Bulgaria, the Bulgaria-Romania-Hungary-Austria pipeline and the Ionian-Adriatic Pipeline.

The Interconnector Greece-Bulgaria (IGB)has now, after years of inaction, entered its implementation home-stretch, with a planned volume of 3 to 5 billion cubic metres per year (bcm/y) and a provisional 2020 date for commercial operation.

Following exemption from provisions of the EU’s Third Energy Package, due to its initiation before the adoption of the 2017 Capacity Allocation Mechanisms network code, it moreover enjoys the European Commission’s support for Greek and Bulgarian plans to realize it.

As important as this acceleration of activity is for Bulgaria’s gas balance and for the Borissov administration’s ambition regarding the launch of a Balkan gas hub, it is due mainly to a broader Energy Union initiative, a limited-volume project that seems feasible amidst declining international gas prices.

The Vertical Gas Corridor (VGC)project aspires to assure bidirectional supplies along the route from Greece into Ukraine. Set up by agreements dating from 2014 among joint ventures, governments and  transmission system operators (TSOs) in the broader SEE and CEE regions, it is based on Projects of Common Interest (PCIs) in the form of interconnectors and LNG plants.

North Macedonia would benefit from VGC, either via the Kyustendil-Zidilovo interconnection point (IP) and/or the revived Nea Messimvria-Štip pipeline. Serbia comes next via the EU-promoted Interconnector Bulgaria-Serbia (IBS), which has, however, turned into a serious candidate to transport gas from the second 15.75 bcm/y leg of Turk Stream onto Central Europe.

The recent thaw in Russia’s diplomatic ties with Greece, previously put to the test over Moscow’s alleged interference in the Macedonia name dispute, has not discouraged a Russia-Bulgaria energy rapprochement, boosted by the end of a moratorium on the Belene nuclear power plant and the commissioning of the Lozenets-Nedyalsko extension pipeline.

According to media reports, Gazprom seems to be behind capacity bookings from Bulgaria to Slovakia and Austria, targeting the reduction of transit across Ukraine after 2019. The company’s decision on the onshore extension of Turk Stream could affect both SGC and VGC.

Its participation in a tender for TAP’s expansion phase would block the road of other Caspian suppliers to Europe, a road already steep due to energy firms’ reluctance to keep capital investments in deep-sea deposits up, allured by the quick-earning shale, as shown in Azerbaijan’s case.

In another scenario, Turk Stream’s continuation in reverse operation via the existing Trans Balkan pipeline would make IGB unviable.

Moldova and Ukraine could equally join the VGC via the IP at Isaccea, Romania, on the Ukrainian border less than 30 kilometres from Moldova. Since SGC capacity could not cover those volumes, they would be complementarily covered by American LNG, regasified at a proposed floating storage regasification unit (FSRU) in northern Greece and then transited via the IGB.

Despite a successful first market test phase, delivery of this FSRU has slipped from 2020 to 2021, reflecting the broader slowdown of the LNG industry in opening up new markets, owing to the strong Chinese demand.

The Bulgaria-Romania-Hungary-Austria (BRUA) pipelinecould fill the interconnection gap between Romania and Central Europe. With signed contracts and assured financial support, the project has entered the execution phase. Still, two factors could stall its bringing to fruition.

Aside from its possible connection to the White Stream pipeline from the second leg of the proposed Trans-Caspian Gas Pipeline (TCGP), BRUA’s commercial logic also involves the potential for Romanian gas exports to SEE via TAP, in addition to the western route.

But Bucharest’s November 2018 offshore law was met with irritation on the part of industry majors because it introduces an unfavourable tax regime for hydrocarbon extraction in the Black Sea.

This development casts doubt on the completion of BRUA’s second phase (expansion of transmission capacity to Hungary to 4.4 bcm/y). Meanwhile, hopes are laid in the third and final auction for capacity booking on the Romania-Hungary interconnection point, as current volumes are far from meeting the TSOs’ expectations.

Furthermore, Hungary’s insistence on diverting BRUA to Slovakia also threatens the FIDs by Austria’s OMV and the US ExxonMobil in Romania’s Black Sea offshore. Nevertheless, their interest alone would probably suffice to prompt a new auction for incremental capacity at the Hungary-Austria IP.

The Ionian-Adriatic Pipeline (IAP)has gained moderate momentum as the need to Europeanize and gasify the energy consumption profiles of Albania, Montenegro, Bosnia and Croatia has been recognized. The IAP has so far failed to obtain EU financing, but it may be included in the fourth PCI List.

However, tariff and cost recovery challenges have so far stymied the creation of a dedicated project company. Moreover, IAP’s effective ability to serve demand from Croatia onwards remains in doubt, despite the Azerbaijani company SOCAR’s interest (through its Balkan subsidiary) in investing in the Albanian  and Bulgarian gas distribution and storage systems.

A long-stalled LNG terminal on the Croatian island of Krk, in the northern Adriatic Sea, would offer a complementary U.S. supply option for IAP’s offtakers, activating the pipeline’s north-south flow feature and enhancing the viability of both projects.

However, limited market interest, as well as Hungary’s failure to meet its diplomatic commitments on diversification of supply sources after its long-term contract with Gazprom expires, by booking Krk capacity, compound the uncertainty over when the Krk terminal’s FID may be taken and construction begun.

To conclude:The preceding overview of regional infrastructure developments yields the conclusion that the SGC, via its TAP and TCGP segments, and with the prospect of American LNG supplies, drives the activity on projects with cross-border impact in SEE and CEE.

Such projects would boost flexibility and optionality of gas supplies, enhancing security of supply and, through diversification of sources, also reinforcing competition. They would also likely put downward pressure on wholesale gas prices.

At present the BRUA, IAP and Krk LNG projects have stumbled upon operational obstacles, while the VGC’s fate looks more promising. However, even if several of the projects still look uncertain because of market conditions and the region’s complicated politics, getting them on the front burner would be crucial for the establishment of a healthy trading environment in the discussed area, where the “hub” term has often been misused by political leaderships, and for the advancement of a common Euro-Atlantic path.