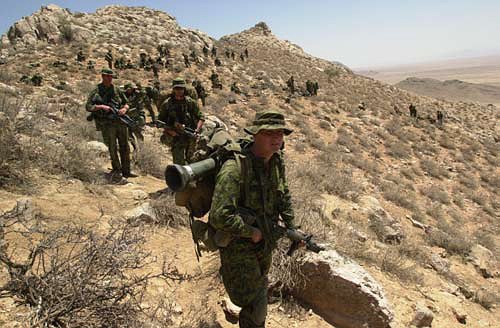 Afghanistan has been consistently under the eye of international security watchdogs due to years of turbulent conflict and political instability. If you look at the map, Afghanistan’s geographical position lies between the Middle East, Central Asia and South Asia (regions not known for strong democratic institutions or security). Additionally, Afghanistan is a very fragmented society with a varying mix of ethnic groups. When you take all this into consideration it is obvious that the nation was very susceptible to conflict, either generated internally or due to international occupation or interventions, as recent history would show us.

The Afghan conflict we are most familiar with started in 1978 with the Saur Revolution that overthrew the ruling government. As a result, a socialist government was formed ruled by the Khalq Party with a new political doctrine encouraging a secular state. The government introduced land reforms and equality of the sexes. Overall, it seemed to be a state headed in a socially progressive direction. However, dissenters to this new regime did not sit idly by. They worked to take apart the ruling socialist party by way of kidnapping, torture, or murder of various political elites and members of the intelligentsia. They became known as the Mujahedeen, and were loosely aligned with opposition forces made up of a majority of Pashtun tribesmen.

With the onset of deep political insecurity and the threat of a deteriorating government, the government called in the Soviet Union to help fight back the Mujahedeen resistance. About 100,000 Red Army troops were deployed to Afghanistan. However, the international political environment at this time was tenuous between the two world powers, The United States and the Soviet Union, and Afghanistan became a proxy war between the two. In their attempts to dissuade the Soviet Union from their occupation of Afghanistan, in their cold war strategy, the United States provided arms to the Mujahedeen resistance groups, and other countries such as Saudi Arabia and the UK provided extra support.

A bloody conflict left an estimated 2 million people dead and 1.5 million people were displaced. To this day, there are still many landmines in the state dating back to this conflict. By 1992, the socialist government had collapsed and Afghanistan was established as an Islamic State. Many groups, however, refused to acknowledge the new government and the country fell into a brutal civil war. The civil war caused government departments such as the police, justice and education systems – the very backbone of all modern and progressive society – to become inefficient, ineffective and corrupt. Throughout the rest of the 1990s in Kandahar, the Taliban emerged as a strong political and religious force and began to implement its version of order, eventually establishing the Islamic Emirate of Afghanistan.

After the September 11, 2001, attacks, international relations, geopolitics, and the concept of international security dramatically changed. The Taliban, having claimed responsibility for the attack was now on the list of terrorist groups of many Western states. Other coalitions, such as NATO, joined the US and the UK to fight against insurgency attacks and supplying troops and placed Hamid Karzai as interim leader of Afghanistan. NATO eventually took command of the United Nations mandated International Security Assistance Force (ISAF) in 2003.

The mission of ISAF was to enable the Afghan authorities to provide effective security across the country and ensure that it remained safe from terrorist groups. ISAF aimed to help build the capacity of the Afghan security forces to allow them to take responsibility for dealing with instabilities within their own state. The Wales Summit of September 2014, highlighted the progress made by ISAF troops in the period of their deployment. They had worked to create a secure environment to improve governance and socio-economic development, which are inherently important to a sustainable nation. Afghanistan has made large gains in basic health care and development over the past decade. In January 2015, NATO launched a new non-combat Resolute Support Mission to train, advise and assist Afghan security forces and institutions.

Canada has been part of the effort in Afghanistan for the last 12 years with our mission receiving mixed reviews. Although since the end of World War II, Canada has always tried to maintain peace and only support military intervention when absolutely necessary there was very strong support for Canadian intervention in the aftermath of 9/11. Approximately 70% of Canadians saw a justified move to intervene. However, by 2006, support for active military intervention in Afghanistan declined, according to Charles Miller’s report “Endgame for the West in Afghanistan? Explaining Decline in Support for war in Afghanistan in the United States, Great Britain, Canada, Australia, France and Germany.”
Now, a deeper reliance on equipping the local community has become a preferred goal for Canada and Canadians. With NATO’s non-combat mission, Resolute Support, building institutions locally now seems a step closer to peace and democracy in Afghanistan.