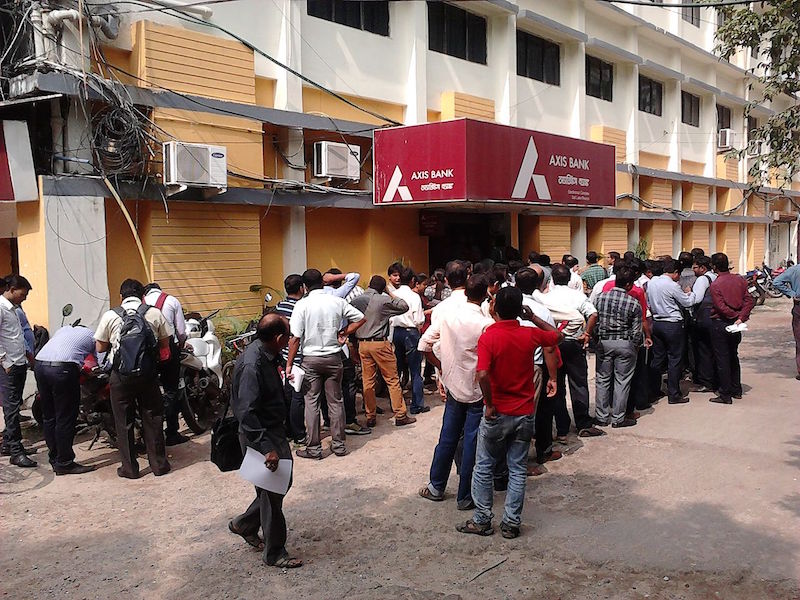 In an unprecedented move, Modi declared the two largest current denominations of 500 and 1000 rupee notes illegal. This was a strategy to counter corruption, as promised in his electoral campaign, namely the usage of non-taxable income. The money generated from such corruption is named ‘black money’. The total amount of black money is estimated at $400 billion to more than $1 trillion. Since cash savings cannot be taxed, there is very little legal income attained by the government, which has very little revenue from its citizens.

The target is to halt terrorism financing and organized corruption groups that stockpile counterfeit money overseas. According to Transparency International, India is ranked 76th out of 168 countries in the Corruption Perceptions Index. It also has a 38 out of a 100 score in corruption perception, with 0 being the most corrupt. This means that while India is in the middle of the pack when it comes to corruption internationally, and the public sector in the country is perceived to be very corrupt and susceptible to bribes. Modi promised to tackle corruption and halt tax evasion in his electoral campaign by trying to recover black money overseas as well as increase the amount of income tax civilians are paying. The demonetization of the rupee notes was part of the agenda to attack corruption at its core.

The Indian population originally praised Modi’s bold move to ban the notes. The mood quickly turned sour when citizens needed to exchange the old currency notes for the new denomination notes. Since the strategy turned 86 percent of India’s cash into illegal tender, most Indians needed to exchange their money quickly. Large populations lined up in front of banks and ATMs to exchange the rupee notes for legal tender. The lines were so long that many spent days waiting to complete the transaction. Rich citizens avoided the queues by hiring men to stand in line for them. Lower and middle-class individuals were forced to spend days in line to exchange notes in ATMs that had very little cash left. Many were India is a cash-based economy, and most people do not use credit or debit cards in favor for rupee notes.

Modi gravely misunderstood the dependency of cash in poorer populations, especially among housewives who save up money from their husband’s income for ‘rainy days’, or the lower class who had saved cash payments for prized assets such as gold or property. This allowed another black market to appear, where the upper class are hiring runners to deposit cash in smaller amounts to avoid the fines. There are ways that the rich are able to avoid the hassle of exchanging the notes and they are not impacted by the policy as much as lower class citizens are. The opposition has noted the way the Indian economy has been placed into disarray, with ex-Prime Minister Manmohan Singh stating that it “can weaken and erode our people’s confidence in the currency system and in the banking system”.

The Setbacks to Countering Corruption

The announcement of the strategy is short-sighted as he failed to account that the majority of the Indian economy is based on cash, especially poorer populations who are dependent on rupee notes to survive. Banks in rural areas are running out of new notes and villagers are unable to exchange money as they have no bank account and banks do not have time to create one for them. Local markets are closing, and villagers cannot attain basic groceries and day-to-day goods as storekeepers ran out of money to exchange to buyers. Due to the lack of currency, the move also produced a record-breaking drop in the value of the rupee.

There is a continuation of support for Modi’s strategy as ordinary citizens are frustrated with the corruption of wealthy families. Many are considering it to be a ‘temporary hardship’ in order to punish             those who are wealthy and do not pay tax. Since the announcement was sudden, hoarders were not able to move out their money into gold or land assets in time. However, this is a risky decision and may disturb the rise of the Indian economy. The move may have been targeted towards the corrupt rich, but it gravely affects the rural population. Modi must quickly act for those who are in most need of money before they lose their lifetime earnings.

Photo:People queue outside a private bank to deposit and exchange 500 and 1000 currency notes at the sector V, Salt Lake City, Kolkata. (2016), by Biswarup Ganguly via Wikimedia Commons. Licensed under CC BY 2.0.