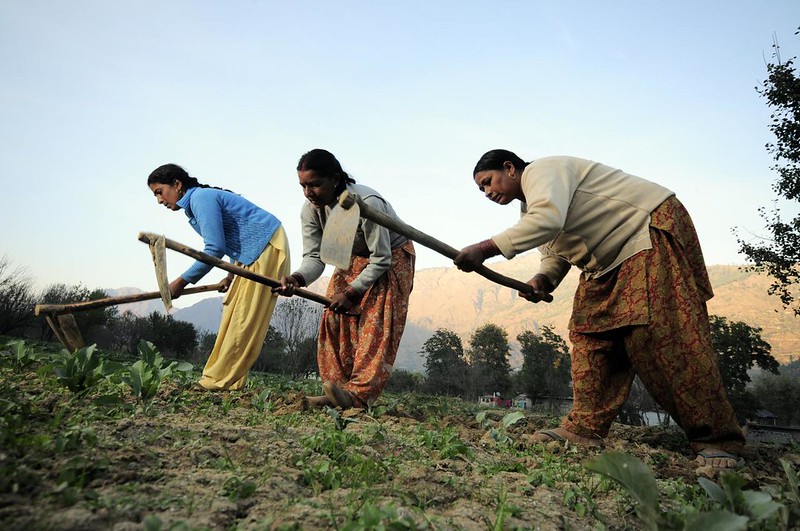 Food insecurity is a global issue, though it most prevalently affects women and their families in developing nations. Agriculture is one of the main methods of employment for these women, though pervasive gender inequality in many of these areas results in a lack of resources and opportunities for women working in agriculture. According to Cristina Larrea from the International Institute for Sustainable Development, “Food security is an intersectional issue. It touches on income, poverty, access to resources, gender-based discrimination and health.”As a result, increasing opportunities for women in sustainable food production would in turn improve economic and social circumstances within these developing nations. The Food and Agriculture Organization (FAO) of the UN estimates that “if women farmers had the same access as men…This could reduce the number of undernourished people in those countries by as much as 17 per cent, translating to up to150 million fewer hungry people.”

The International Institute for Sustainable Development (IISD) has established a system to reduce gender inequality in agriculture, amongst other initiatives which include promoting human development in developing countries. This think tank conducts research and data analysis methods in order to help countries implement more sustainable solutions. The IISD has established voluntary sustainability standards (VSS), which seek to identify ways to reduce gender inequality, and determine which sectors should be targeted.

The six themes that VSS focuses on tackle both the gender-gap in agricultural food production, as well as interrelated issues which put an extra burden on women pursuing this type of work. The VSS themes follow as such: 1) Household Food Security, 2) Women’s Rights to Productive Agricultural Resources, 3) Gender Equality in Education, 4) Women’s Unpaid Domestic Labour, 5) Women’s Decision Making and Empowerment, and6) Decent Work for Women. Some projects to achieve these goals include providing equal access to food, the promotion of women’s participation in agricultural fields traditionally practiced by men, prohibiting child labor to allow children to pursue an education, providing financial support in order to alleviate household chores, and the improvement of working conditions for women.

This outline of IISD objectives aligns with a number of the United Nations Sustainable Development Goals, including zero hunger, gender equality, decent work and economic growth, as well as reduced inequalities. VSS is an important factor in achieving sustainable development, though this program does not solve the issues directly, and more so acts as a guideline for sustainability goals.

What are the obstacles that women in agriculture face?

The full agricultural potential of women farmers is hindered by the lack of accessibility to land; “in developing countries, only 10 to 20 percent of landholders are women, and in some parts of the world, women still cannot legally own or control land”. Due to this reality, figures demonstrate that women produce less than men in agriculture, though this data is skewed due to women having less access to land. According to an FAO report,“empirical evidence from many different countries shows that female farmers are just as efficient as their male counterparts, but they have less land and use fewer inputs, so they produce less”.

Another difficulty which women of developing nations face in agricultural work is having the responsibility to carry out household responsibilities, meaning they have less time for work. This includes caring for children, as well as household chores. The FAO has determined, “Women and girls in Ghana, the United Republic of Tanzania and Zambia are responsible for about 65 percent of all transport activities in rural households”, and the prevalence of HIV/AIDS in South Africa puts an added burden on women to care for sick members of their families.

The gendered gap in agricultural production is not fairly represented, since women are currently working in these sectors and contributing to food production, though they are unpaid for this work. 9 percent of women in Ecuador are paid for agricultural work, whereas 30 percent of men receive regular pay, and similar realities in the gendered gap exist across other developing countries.

The United Nations is taking action to support and foster women’s equal participation in sustainable food production with an initiative which “aims to empower rural women to claim their rights to land, leadership, opportunities and choices, and to participate in shaping laws, policies and programmes”.

The awareness of the gendered gap in agricultural production must be highlighted in order to include more women in agriculture, a feat which would establish increased food production and benefit sustainable development globally.