During the first 18 days of demonstrating for freedom and democracy, Egyptian men and women stood side by side in Tahrir Square. Women died next to men and did not falter in their pursuit of these ideals. As the struggle becomes institutionalized, however, the voices and demands of women are being limited and ignored in the name of nation building. Many political and legal gains made by women during the Mubarak era are now at risk due to their perceived tainted association with the old regime.  This paradigm of female subordination threatens to reverse decades of progress and squander the opportunity to make Egypt a model for gender equality in the post-revolution Arab world.

Egypt is a particularly relevant case study for women’s rights for two reasons. Firstly, it is the most populous Arab country with the longest and best documented women’s movement in the Middle East. Secondly, Egypt is the figurative epicentre of the Arab Spring. Tunisia may have been the spark of revolution across the Middle East, but Egypt has been the country whose results will affect the wider Arab, and Muslim world. As the birthplace of the Muslim Brotherhood, and a country of many diverse religious and ethnic communities, the success of Egypt’s democratization will be an example for the rest of the Middle East.

Egyptian feminists have wrestled with western and Islamist ideologies as they’ve sought to reshape women’s rights. The Arab Women’s Solidarity Association (AWSA) maintained a high profile in pre-revolution Egyptian politics, often playing a provocative and controversial role. The Association’s membership grew in the mid-1980s during the crisis over Islamically derived Personal Status Laws (PSLs), as the organization became a forum for feminist debate and outreach. Feminists and Islamist voices were present in their publications and seminars, often leading to disagreements on the role of Islam in everyday life. However, there were no disagreements about the economic and political empowerment of women.

In 1988, a group comprising lawyers, journalists, and professors collaborated in publishing a book entitled The Legal Rights of Egyptian Women, spelling out the rights guaranteed by laws and conventions so that women could enjoy them in practice. The booklet made further recommendations for improvements, including a proposal for a new marriage contract.

Mobilization for the proposed rights gained support with the appointment of one of the proposal’s writers, Aziza Hussein, to the National Preparatory Committee for NGOs in the run-up to the 1994 UN Conference on Population and Development (ICPD) in Cairo. Hussein seized the opportunity to mobilize women’s rights groups and activists. The marriage contract from the 1988 proposal was revived and adopted by ICPD’s Gender and Equality Committee. The Committee positioned itself within a liberal Islamic frame of reference, and presented evidence from Islamic history to support the idea that women can include conditions in their marriage contracts to guarantee their rights to divorce, a say in polygamous marriages, and child custody. The ICPD and the international focus it brought to Egypt garnered a personal interest in women’s rights from First Lady Suzanne Mubarak, who opened the National Council for Women (NCW) in 1993.

The Committee would go on to promote procedural changes in PSLs, including the new marriage contract. In 2000 these changes were formerly ratified under Law No. 1, with further legal modifications in 2004 and 2005, introducing the new family court system, and establishing a fund to ensure fair access to alimony, child support, and custody. What is important to note here is the role of activists in conceptualizing the proposal and promoting the recommendations through consciousness raising campaigns. Only with the proposal’s momentum did the regime come on board with the First Lady’s endorsement.

Though a battle was won on February 11,2011, when Hosni Mubarak was ousted, women’s rights have lost subsequent fights in the aftermath of the revolution. A tone was set on February 1, 2011, when the International Women’s Day march was met by sexual harassment, heckling, and counter-protests by men. Following that display, no women were selected by the military council to sit on the ten member constitutional committee responsible for making the constitutional revisions. This was despite the fact that Egypt is rich in female legal experts, coming from both the Supreme Constitutional Court and various faculties of law. The very composition of a preliminary committee such as this one has triggered fears and suspicions with regards to the role of women in Egypt’s transitional future.

Despite high female turnout, women may be the biggest losers in the election that has been hailed the freest and fairest in Egypt’s recent history. Women have been very politically active, with 376 female candidates running during the electoral cycle, lasting from November 28, 2011 to January 11, 2012. However, only eight women won seats, two of whom have been appointed. This means that only 2% of parliament will be composed of women. Egyptians have seemingly failed to turn the momentum of the streets, which actively included women, into political representation.

The new electoral structure has arguably stacked the odds against female candidates. Amendments made to the electoral law by the male-dominated constitutional committee in October 2011 have abolished the Mubarak era’s 64-seat quota for female parliamentary representatives. Instead, each party’s candidate list must include at least one woman. Parties reluctant to include women then relegate them to undesirable slots on the candidates’ lists, making their appointments to parliament unlikely. The Democratic Alliance coalition, headed by the Muslim Brotherhood’s Freedom and Justice Party, have not allowed female candidates to field positions higher than third on their lists.

Mubarak’s inclusion of female politicians in the government was there to promote his democratic credentials and consolidate its rule through regime-friendly female appointees. Seeking to present himself as a guardian of modern values, the former president enlisted his wife to be the foremost champion of women’s rights. She headed a number of organizations including the NCW and the Suzanne Mubarak International Movement for Women and Peace. Despite the regime’s appropriation, women benefited from this unprecedented visibility in the political arena.

As a worrying precursor of things to come, the NCW’s Cairo headquarters was burned down during the January 2011 demonstrations as a symbol of the regime. Post-revolutionary Egypt now faces a perception that associates the women’s rights movement with the former regime, especially the First Lady. Public perception has already been politically manipulated to rescind laws and legislative procedures that were passed in the last ten years, particularly the women-friendly PSLs.

Law No. 1 is now being discredited pejoratively as “the laws of the mistress” by prominent Egyptian figures. Many have been associating Mubarak’s corrupt practices with attempts to disrupt the stability of the Muslim family. While these debates might persist during the drafting of the new Egyptian constitution, they will be hampered by a lack of women’s participation. It is the newly elected parliament that will be responsible for rewriting the constitution, which means PSLs will be ratified according to the parties holding power. Given the few female candidates in parliament, it is uncertain whether gender equality will remain a fundamental principle of the new constitution. 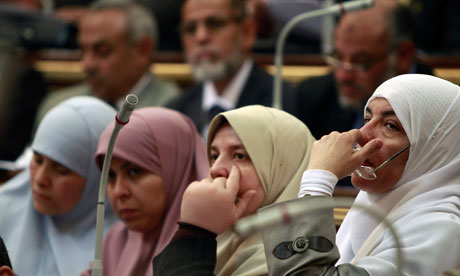 While the Muslim Brotherhood has hailed the massive turnout of women during the elections an “inspiring” direction for the revolution, female activists predict new Islamist parties will strip women of the achievements they made throughout the years.

Women’s rights activists have realized they still have to fight to have their demands taken seriously. They must continue to place women’s rights issues at the centre of political debates, and insist that their voices count. The question of women’s rights may be sidelined in Egyptian nation building for now, but the road to achieving full equality may still be realized with persistence. After all, the greatest achievement of the Egyptian Revolution thus far has been to demonstrate the power of civil society. This alongside the Egyptian feminist tradition of activism will have to persist in order for women’s rights to be fully realized.

Mahsa Alimardani is a fourth year student in Political Science and Near and Middle Eastern Civilizations at the University of Toronto. She’s been a reporter   for Taiwan’s Taipei Times, as well as a writer and broadcaster for U of T’s radio station CIUT and newspaper The Varsity. She’s currently completing a internship as a Communications Officer at MSF/Doctors Without Borders and writing her senior honours thesis on the women’s movement in Iran.

Mahsa Alimardani
Mahsa Alimardani is a fourth year student in Political Science and Near and Middle Eastern Civilizations at the University of Toronto. She’s been a reporter for Taiwan’s Taipei Times, as well as a writer and broadcaster for U of T’s radio station CIUT and newspaper The Varsity. She’s been part of the communications team for MSF/Doctor’s Without Borders, and recently completed her senior honours thesis on the women’s movement in Iran and plans to pursue graduate studies in human rights.

NATO Prepares to Throw Its Trident

With tensions rising in Eastern Europe, North Africa, and the Middle East, NATO is set to test its revamped Response Force in its biggest military exercise since 2002.