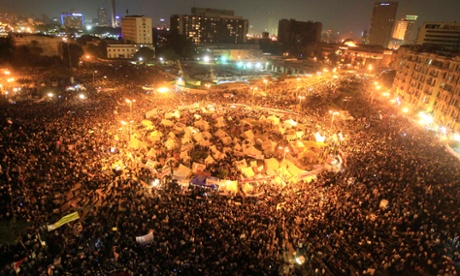 Since the overthrow of President Mubarak in January 2011 and the recent ousting of Mohamed Morsi earlier this month, revolutionary Egypt has been largely focused on power – power of the people, and the power that subsequent social and political constitutions and interim governments continue to fight for. Very few, however, have demonstrated that they know what to do with this power, and Egyptians continue to experience further unrest and the questioning of pre-uprising factors of resistance.

Until recently, most of Egypt, including recently ousted president, Mohamed Morsi, and the Islamic political society supportive of him, the Muslim Brotherhood, were still uncertain of the future of their country’s affairs, and of a much needed compromise to satisfy the diversity of its people. Public criticism, strikes, and street protests that mounted in Egypt and eventually led to Morsi’s deposition, and that have intensified between supporters and Egyptian security forces this month are symbolic of the lack of democracy that followed the uprising that toppled the regime of President Mubarak, as well as the sense of superiority among the government and the people that remained.

Under Morsi, one collective Egyptian identity was being created hierarchically that was not inclusive of the identities of the population, but rather that supported either the political elite or helped the people maintain their horizontal power and means of resistance. Egypt’s political history has involved no lower legislative house since June 2012, when the last one was dissolved after courts declared its election rules unfair. As a result, the upper house that was elected last year by only a 10% voter turnout functioned as a temporary lawmaking body that was 85% made up of Islamists and led by the Muslim Brotherhood, whose deliberations and priorities were rendered suspicious by many.

The main opposition bloc to Morsi and the Brotherhood, a coalition of non-Islamist groups called the National Salvation Front – themselves representing a spectrum of secular views – claimed that Morsi ignored feeble promises. An opinion poll carried out by Baseera, an independent Egyptian public opinion research centre, suggested that Morsi’s approval rating had “plunged from a high of 79% in October [2012] to just 49% [in February]” – an important statistic to consider next to the 3% margin that just barely allowed him to capture the presidency.

Further, despite the fact that many Islamist groups were allied to, inspired by, and sympathetic to the Brotherhood, the latter lost power rapidly and became increasingly ridiculed. Other, more chronic troubles, including worsened unemployment (a source of discontent that fueled the uprising of 2011), slides in the local stock market, and fuel shortages soon became the norm under President Morsi and the Muslim Brotherhood.

The Question of Democracy: What next?

However, as internal divisions, of age, class, religion, and sect ,  emerge and re-emerge within Egypt, the country remains polarized. Even if the defenses of Morsi and the Muslim Brotherhood were truthful, they failed to provide transparency with regards to whose goals he claimed to secure, and what notion of democracy he attempted to represent. The pluralisms and particularities that are inherent within debates of concepts and meanings rooted in language, identities, and communities affect the ways in which democracy is defined and achieved. If debates of Islam, nationalism, and fear are inherent within the law, it is impossible to settle with one definition, or one common concept of democracy, only serving to increase levels of confusion and uncertainty in Egypt. Simultaneously, the people of Egypt continue to disagree on the goals of Egyptian revolution, which could thwart the very efforts of unity that many aspire for.

The different forms of Islam – that is, its various schools of law and philosophy, parties, sects, and interpretations that link these differences – must be questioned and considered in forthcoming constitutions, as well as those who identify as secularists or with competing religions, such as Christianity. An emphasis must be placed on the complexities of Egyptian nationalism before a democratic Egypt can be defined and agreed upon, as it is these religious, political, and cultural particularities on the ground that continue to fuel the on-going tension among Egyptians.

While competing notions of democracy exist in Egypt, many would agree that winning elections is not enough. Many of the world’s elected leaders, though popularly elected, do not always govern with the interests of all peoples in mind, but rather exercise what is called majoritarianism – that is, “the credo of an expanding group of elected but autocratic rulers around the world, which holds that electoral might always make you right.” This misunderstanding or, perhaps, lack of understanding, is intensified as the issue becomes how the relationship between supporters and opponents of autocrats such as Morsi is managed. While many Egyptians consider their country ungovernable, focus has now been placed on Egypt’s armed forces.

Such a discussion of national security and democracy entails extensive debate and involves a spectrum of individuals, philosophies, interpretations, and geographies. Those with power, including the people and the political elite alike, must acknowledge competing theories of nationalism, identity, legacies of international relations, resistance, and revolution that are offered by both Muslim scholars and Western philosophy in order to successfully,  and peacefully, determine the origins and trajectories of the movements of the Egyptian uprising and prolonged peoples’ revolution. It is crucial, as these debates and movements have emphasized, that the demonstration of both individual and collective power among the people take the form of resistance in a holistic and effective way, and one that accepts the complexities and pluralisms that are often either ignored or misinterpreted. Otherwise, colonialism, dictatorship and oppression will continue to prosper, as they have done for many decades.

Katie Joyce
Katie Joyce is a Junior Research Fellow and Vancouver-based intern at the Atlantic Council of Canada. Katie is a recent graduate of Queen's University, where she completed her BAH with a major in Global Development Studies and certificates in international and intercultural studies. Through the department of Global Development Studies and involvement in global development and international affairs organizations, Katie has studied in Herstmonceux, England and at the University of Havana in Havana, Cuba; and has interned in Arviat, Nunavut, where she became interested in domestic social, environmental, and security issues, particularly in the Canadian Arctic. As well as international relations and current events, Katie's areas of interest include domestic political affairs and Canada's role in multilateral networks and on the international stage. With essays published by distinguished professors of Simon Fraser University and Queen's University, Katie has had experience with topics of intercultural competence and community outreach, and is thrilled to be contributing to the Atlantic Council's Global Horizons high school outreach program.

The NATO Council’s Alexander Corbeil, Senior Middle East Analyst sat down with CTV News on March 8 to discuss the Syrian refugee situation, with the number of refugees reaching 1 million.