An open and transparent democracy emphasizes that actions speak louder than words. In the eyes of the voting public, the political reality of a decision trumps the rhetoric behind it.

However, in closed societies like Russia or North Korea, behind-the-scenes political machinations are seldom visible to international observers or locals.

As a result, diplomatic language can sometimes prove to be the only window into an otherwise closed regime.

Analyzing the vocabulary and tone of political statements can provide significant clues used to illuminate a country’s motivations, capabilities, and intentions.

Last week, the Kremlin adopted a sudden and comprehensive shift in vocabulary with regards to the prosecution of the war in Donbass. Within a matter of days, a very important word which had previously defined Vladimir Putin’s ultimate foreign policy objective in Ukraine had disappeared from all Kremlin-controlled media entities.

The term in question, “Novorossiya,” has existed as a concept for centuries. “New Russia” in English, it refers to a region north of the Black Sea which was annexed by Russia in the aftermath of the Russo-Turkish Wars of the 18th and 19th centuries. Stretching from the Dniester River in the east to the Donbass in the west, these areas were included within the borders of the contemporary Ukrainian state, established in 1918. 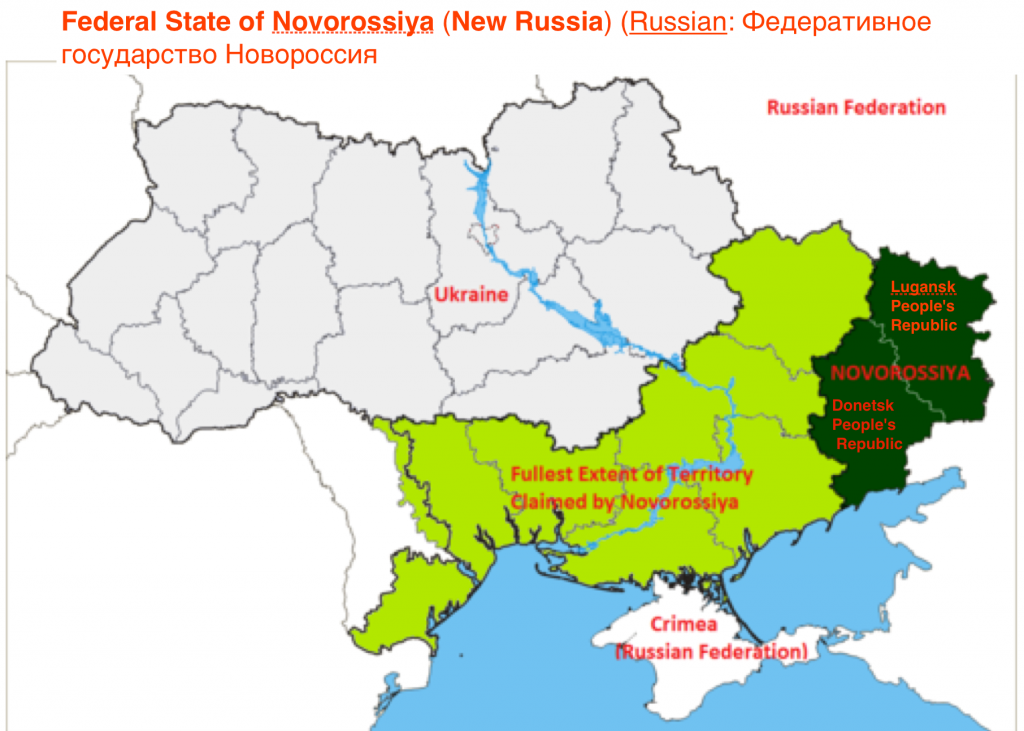 Novorossiya remained largely dormant for a century, until the concept was revived by Putin in April 2014 during his annual live Q&A session:

“I would like to remind you that what was called Novorossiya back in the tsarist days – Kharkov, Luhansk, Donetsk, Kherson, Nikolayev and Odessa – were not part of Ukraine back then […] Russia lost these territories for various reasons, but the people remained.”

“The essential issue,” summarized Putin, “is how to ensure the legitimate rights and interests of ethnic Russians and Russian speakers in the southeast of Ukraine.”

This has been the crux of Putin’s erratic foreign policy in Ukraine over the past year, as he has attempted to resurrect Novorossiya through a combination of annexation and hybrid warfare.

During this time, the term “Novorossiya” was being mentioned anywhere between 15,000 and 23,000 times on state television per month.

And now, with the abrupt removal of the word from all state publications, it appears that the Novorossiya project is dead.

On May 20th, Alexander Kofman, foreign minister of the self-proclaimed Donetsk People’s Republic, suddenly declared that the campaign was indefinitely “frozen.” In a sharp change of attitude, he stated that “we don’t have the right to impose our opinion on [the Ukrainian cities of] Kharkiv, Zaporizhia and Odessa.”

Rather than a sudden and improbable shift to the moral high ground after a year of violence and vitriol, the end of Novorossiya can more likely be attributed to Putin’s impulse to abide by the Minsk II ceasefire agreement, signed in February 2015.

However, after the immediate collapse of the previous Minsk ceasefire in September 2014, why would Putin be so keen to comply with Minsk II?

The answer may lie in a watershed meeting which took place in Sochi between Putin, Foreign Minister Sergei Lavrov, and Secretary of State John Kerry on May 12th. This was the first meeting between the political leaders since May 2013.

In an article for the Carnegie Moscow Center think tank, Andrei Kolesnikov suggests that the two sides engaged in a political swap: Western leaders would tacitly accept the outcome of the Crimean annexation in exchange for the abandonment of the Novorossiya project.

Lending credence to this theory, Lavrov subsequently declared that Kerry had not mentioned Crimea once during the meeting.

“Draw your own conclusions,” he stated ominously.

If this is true then it would have an immense impact upon the future of Ukraine, and it allows one to begin mapping out the potential and likely outcomes of the conflict.

The hypothetical incorporation of Novorossiya in its final form into Russia proper would never have been an ideal conclusion for Putin. An outright invasion of the remaining territories would prove too costly in terms of casualties, expenses, and intensified western sanctions.

In addition, the splintering of Ukraine would see the western regions loyal to Kyiv take a tremendous step forward in their efforts to integrate with the rest of Europe. And a westernized Ukraine is simply unacceptable to Vladimir Putin. He requires Ukraine as a buffer zone between the West and Russia, and allowing a partition of Ukraine would carry NATO influence right to his doorstep.

As well, the influence of the Ukrainian separatist movement would effectively be neutralized with the achievement of its ultimate objective. Although superficially a victory, this would in fact represent a tactical loss for Putin, as the insurgency has the ability to be manipulated into a stagnating force for the entirety of Ukraine.

By harnessing the paralyzing power of the separatists, Putin possesses the means to obtain his long-sought buffer zone.

And herein lies the reasoning behind Putin’s sudden acceptance of the Minsk II accord.

Minsk II states that Russia is not required to relinquish control of the border until Ukraine completes its decentralization process and grants regional autonomy to the Donetsk and Luhansk People’s Republics.

If Kyiv agrees, the DPR and LPR will become an open sore within Ukraine which can be poked and prodded by Russia at will. Ultimately, the country would suffer political paralysis and would become Europe’s newest failed state.

Given that Minsk II provides such a crucial Russian advantage, it is understandable that Ukrainian President Poroshenko might balk at the prospect of awarding these regions special autonomy.

This also explains the recent buildup of Russian troops along the Ukrainian border. It is a clear message to Kyiv that it must play ball or risk further violence.

If Poroshenko refuses to grant autonomy to the DPR and LPR, the entire situation could descend into a frozen stalemate mirroring the ongoing Georgian conflict with Abkhazia and South Ossetia.

However, while Putin might seem to be angling towards an acceptance of Minsk II, there is a worrying contingency that the matter may not lie entirely in his hands.

On the ground in Ukraine, there are many radical separatist groups which still believe in Novorossiya. These militias wield significant influence over the implementation of Minsk II and are responsible for numerous subsequent ceasefire violations.

By encouraging separatist action in initiating the war in Donbass, Putin may have prodded the separatists past the point of no return. He may have declared Novorossiya dead, but the next few weeks could indicate whether his words will be heeded.

The frigid nature of the conflict as it stands could thaw anytime.

How a Murder Defines a Conflict

Matt Korda investigates how a decade-old murder plays a central role in explaining and perpetuating the Nagorno-Karabakh conflict.