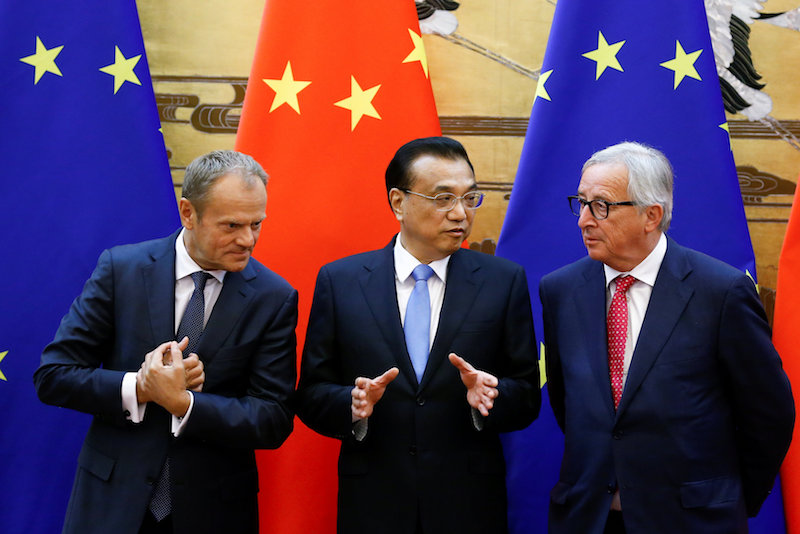 Launched in 2013 by Chinese President Xi Jinping, the Belt and Road Initiative (BRI) is the largest economic project in recent history. It aims to economically connect Asia, the Middle East, Africa, and Europe using the idea of the ancient Silk Road and resurrecting its maritime and land-based routes. Currently, the BRI economies account for one-third of the world’s GDP and almost two-thirds of the world’s population. Some characterize the BRI as a rival to the formerly American-led Trans-Pacific Partnership (TPP). The TPP excludes China and focuses on reviving trade and improving standards in the Pacific region. Similarly, the BRI excludes the US and focuses on reviving trade along the historic Silk Road and gaining access to European markets at a level competitive with that of the US. Both the TPP and the BRI are seen as strategic projects aimed at increasing American and Chinese influence in the Pacific respectively. However, as the US recently withdrew from the TPP, China has an opportunity for immense increase in regional influence through the BRI’s capacity for investment in infrastructure, bilateral agreements, and people-to-people exchanges.

With the aim of greater access to European markets through the BRI, China established the sub-regional cooperation 16+1 format in 2012. This cooperation originates its name from the states that comprise it, including China (referred to as the +1); EU members Bulgaria, Croatia, the Czech Republic, Estonia, Hungary, Latvia, Lithuania, Poland, Romania, Slovakia, and Slovenia; and the 5 Balkan countries of Albania, Bosnia and Herzegovina, Macedonia, Montenegro and Serbia. Together, these European and Balkan partners make up the 16 referenced in the name of the format. This 10 billion euro initiative funding financial projects in Central and Eastern Europe proves to be controversial within the EU Parliament, as it is a “perceived erosion of EU norms, values, and unity.”

The most significant concern for the West is the complicated history of many of the participating states that makes them politically vulnerable.

The most significant concern for the West is the complicated history of many of the participating states that makes them politically vulnerable. Many of the participating Eastern European countries are former Soviet satellite states that turned towards democracy, the rule of law, and integration into the global economy following the collapse of the USSR. Most of the 16 states joined the EU and NATO during a time when they sought protection from Russian influence and access to stronger Western markets, particularly after four decades of poor social and economic conditions. Today, these states still face high unemployment and slow economic growth and as such, are more likely to welcome the BRI as an opportunity to achieve sustained growth. Consequently, the 16+1 format has weakened cohesion and unity amongst EU and NATO member states by offering an economic partnership with China that excludes the US, a traditional ally, and better serves Chinese interests. German Foreign Minister Sigmar Gabriel warned that “if we don’t develop a [European] strategy regarding China, then China will succeed in dividing Europe.” Chancellor Merkel echoed similar concerns, stressing that Europe must “speak with one voice,” while French President Macron warned that the BRI “cannot be one-way.”

With the unprecedented integration of Europe’s market in the past 25 years, China has favoured the 16+1 initiative as their “gateway to Europe;” however, this attempt to enter the market would divide the continent in a economically and politically. Through Eastern Europe, China gains increased access to Western European markets, proven by the United Kingdom’s interest in the BRI. Brexit has particularly increased the UK’s incentive to seek out other means of economic growth, particularly through Chinese investment. In 2016, China accounted for just 3.1% of British exports, compared to 43% for the EU; however, the UK desires to improve their relations with China in hopes of alleviating some of the economic decline that followed Brexit.

While the BRI may pique the interest of the UK, four major economies remain opposed to it: the US, Australia, Japan, and India. Instead, they reestablished the Quadrilateral Security Dialogue (“Quad”) as a counterweight to the BRI. The Quad was originally created after the 2004 Indian Ocean tsunami to provide humanitarian aid and assistance. Strengthening the Quad as a contemporary strategic alliance is a direct response to increasing Chinese regional influence, and territorial claims in the South China Sea. Members of the Quad have each voiced concerns over Chinese activities in the Indo-Pacific region. After Trump withdrew from the TPP, China invited countries in Latin America and the Caribbean to join and participate in the BRI, demonstrating Chinese commitment to increased global interconnectivity, contrasting the “America First” policy promoted in the United States.
The BRI, while currently an ambitious economic project, could develop into a long-term alliance. With Eastern European NATO member states enthusiastically participating in the BRI and, on the other hand, the Quadacting as an “alternative” alliance against the BRI that deliberately excludes China, unity between NATO member states could weaken, as the BRI could provoke a conflict of interest between economic commitments and military commitments of member states.

Simran Sawhney is currently going into her third year at the University of Toronto, where she is pursuing a double major in Political Science and International Relations, and a minor in Contemporary Asian Studies. Born in New Delhi and raised in Hong Kong, Simran has previously interned at the New Delhi branch of the Carnegie Endowment for International Peace, and worked with the G7 Research Group at the Munk School of Global Affairs, the University of Toronto Chapter of UNICEF Canada, Savera Association in New Delhi, and Crossroads Foundation in Hong Kong, a UN-recognized charity. She currently serves as a Junior Research Fellow at the NATO Association of Canada, focusing on Security, Trade, and the Economy. After she completes her undergraduate degree, Simran hopes to continue on the path of research work in the field of International Relations, as well as attend law school. Simran can be reached at simransawhn@gmail.com. View all posts by Simran Sawhney →