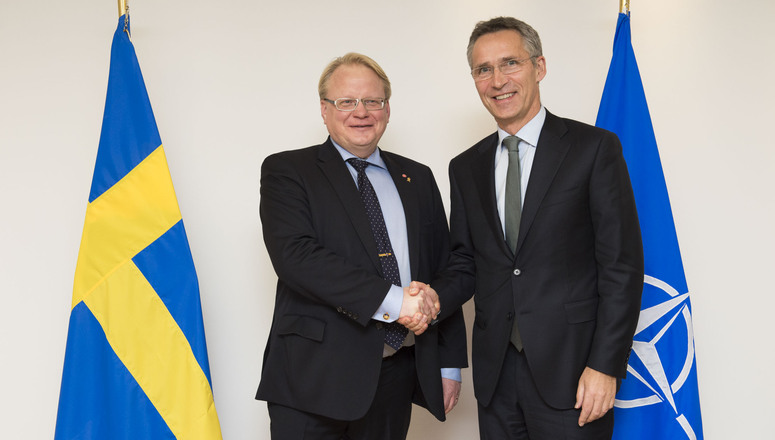 Sweden, like Finland, is a key player in Baltic sea security. Both walk a careful tightrope between Russia and the West. Both, too, have gotten closer to NATO since the annexation of Crimea in 2014, while remaining formally militarily non-aligned. However, despite deepening not only their defense cooperation with NATO, but also their bilateral defense ties with each other, when it comes to membership in the Alliance the domestic debate in Stockholm and Helsinki is still raging in full force.

In a climate of renewed tension, the Nordic security landscape is shifting. Sweden has a 200-year old history of neutrality, with its security and defense policy built on the concept that remaining neutral is the best way to diffuse regional tensions. However, some members of the Swedish public and the political establishment are slowly departing from this long-standing policy of neutrality. (Take a look at Part I for a discussion on Finland’s security policy).

Among the center-right Alliance parties – the Moderate Party, the Centre Party, the Liberals, and the Christian Democrats – there is widespread consensus that Sweden would be better off in NATO. The Alliance’s voters, too, are more likely to vote in favour of NATO membership than against it, according to the latest opinion polls conducted by SIFO (Svenska institutet för opinionsundersökningar). However, with the Alliance acting in opposition, their stance on NATO will not be the shaping force in Sweden’s foreign policy until 2018 at the earliest, when the next Swedish general election will be held.

Meanwhile, the governing coalition of Greens and Social Democrats is opposed to Swedish NATO membership, while willing to considerably deepen cooperation with the Alliance. As for the nationalist right-wing Sweden Democrats, while the official party stance is that they are opposed to NATO membership, there are several dissenting voices among the party leadership, for example Sven-Olof Sällström’s, calling for the party to reconsider its position on NATO.

While the current government is clear in its opposition to full membership in the Alliance, it has nevertheless made security and defense capacity-building a top priority, and, as such, started working more closely with NATO than ever before. In May, Sweden’s Riksdag signed a Host Nation Support Agreement with NATO, with both governing and opposition parties voting in broad support of the deal. Despite rumblings before the vote that the Left Party and the Sweden Democrats would attempt to block the resolution, at the last minute the Sweden Democrats backed the government’s initiative. The agreement will allow the defensive military alliance to operate more easily in the country, facilitating NATO use of Swedish airspace, territory, and territorial waters.

Defense Minister Peter Hultqvist is careful to stress that the Host Nation Support Agreement, like Sweden’s participation in the NATO Baltops 16 drills, its deepening defense cooperation with the United States, and its attendance of the Warsaw Summit to which Finland and Sweden were invited to as “close friends of NATO”, doesn’t mean there has been any change in Sweden’s military non-alignment. Prime Minister Stefan Löfven has stated, “we will not join alliances – but we will always be ready to take responsibility for our common security.” This commitment can be seen in the government’s decision to allocate 17 billion Swedish kronor (about $2 billion US dollars) in additional funding in early 2016 to improve Sweden’s military preparedness up to 2020.

While Sweden’s future in NATO remains unclear, and stark differences of opinion characterize both political parties and the public, what is clear is that in an environment which is increasingly uncertain, Sweden is re-evaluating its security and defense priorities. After the Cold War ended, Sweden’s defense capabilities were reduced to a fraction of their previous capacity. Now, there is a sense of urgency to scale them back up. Closer partnerships are being forged both with NATO and individual countries, notably Finland and the United States. While Sweden-Russia relations have cooled significantly, efforts are still being made to engage in critical dialogue with the Kremlin. Ultimately, the Swedish belief that stability in the region is best preserved by keeping dialogue open, both with the East and West, will continue to inform its policies in the realm of security and defense.