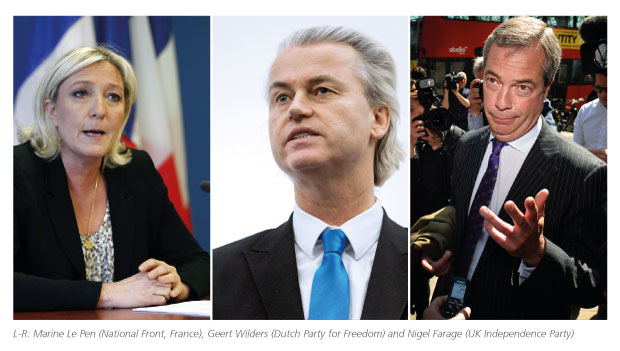 As predicted by many experts over recent weeks, a number of anti-EU, Eurosceptic, or outright nationalist political parties performed well in the recent European elections. While this general trend has caused some alarm, it is important to recognize that, although these were regional elections pertaining to a transnational body, the political contest itself took place at the national level. As a result, it is misguided to assume that the cause of one non-mainstream political party’s success is necessarily the same as another’s or that these distinct electoral results should be regarded as equally significant.

In Britain the anti-EU UK Independence Party enjoyed its most significant electoral success ever, capitalizing on – and stoking – fears over immigration. UKIP’s success has coincided with widespread frustration with the three major political parties representing the entirety of Great Britain and Northern Ireland. The governing Conservatives, have borne the brunt of popular frustration over a still tenuous and anemic economic recovery, its junior partner in government the Liberal Democrats have been regarded as ineffectual and even mendacious by those who oppose their coalition with the Conservatives. Most importantly, Labour has been unable to distinguish itself as a worthy alternative. It has coupled occasional rhetorical overtures to its ostensible left wing base with a general tendency to mimic Conservative priorities, and has consistently allowed the governing party, and now UKIP, to set the political agenda. The Liberal Democrats campaigned on a thoroughly pro-European platform and paid a political price for standing by their principles, but the more lasting impression of this election has been Labour’s continued inability to effectively convey what their principles are. In any event, though certainly a controversial party, any extreme right-wing tendencies within UKIP can be expected to be attenuated by more moderate voices.

In continental Europe, however, some of the newly bolstered political forces are far more concerning. In Greece, the widely condemned Golden Dawn attained some success with its vitriolic anti-immigrant rhetoric and belligerent ultra-nationalism. However, it is important that Greece’s story not just be considered one of a rising right, as the now consolidated far-left political party Syriza gained a plurality of the votes on the basis of an anti-austerity, pro-reform, but ultimately pro-European, platform.

While this shows that the EU elections were hardly a uniform victory for the far-right, Syriza’s victory was not matched by any other far-left parties in the region. Conversely, Golden Dawn will be joined by like-minded parties including Hungary’s Jobbik. In France, the far-right Front National finished first in a result that startled observers, including French President François Hollande whose Socialist Party finished third. It is this result that should be most concerning to outside observers concerned about the direction of European politics.

Elevated concern is warranted not only because France is a more politically powerful and economically significant country than Hungary or Greece, but also because the Front National’s success requires a different explanation than the other successful far-right forces. France has a much more engrained democratic tradition than Greece or Hungary who both experienced relatively recent periods of dictatorship. In the case of Greece, it has been suggested that Golden Dawn has been aided by the vestiges of nationalist-authoritarian ideology within the state apparatuses of the country.

In France, however, the victory of a party labelled as fascist and anti-Semitic by European political leaders cannot be explained in the same manner. It is true that European elections are often used for protest votes, and the Front National will not be attaining the Presidency in the immediate future. Nevertheless, the fact that this party was chosen by one quarter of French voters is alarming. The Green Party or the Left Front, which placed fifth and sixth respectively, were viable alternative avenues for a protest vote, but they will return to parliament with fewer seats as the FN improves their total from 3 to 24. If any of the EU election results are to be considered cause for alarm, it should be those from France. These results are at this stage particular to a single country, but it remains to be seen whether they portend a more general trend throughout Europe’s most thoroughly established democracies.

Trevor Schenk discusses the role of private security companies in Iraq and Afghanistan.

Analyzing Tunisia, Kareem El-Assal seeks to understand why it may be the Arab Spring’s lone success story.