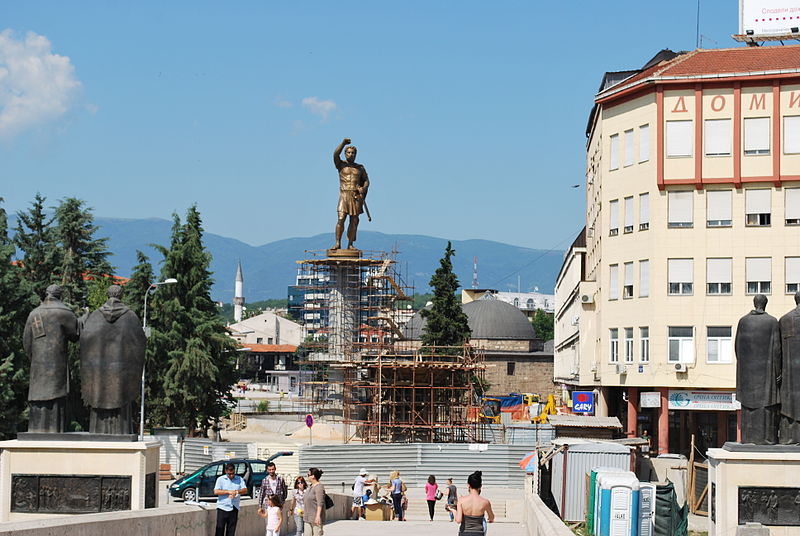 When the 1963 earthquake hit Skopje, residents lost 80% of their city and watched the world come together in a rebuilding project for the capital. As 80 nations contributed aid to construct the new Skopje, the Former Yugoslavia Republic of Macedonia (FYROM), turned a disastrous environmental crisis into an opportunity to unite the world. Architects all over the world competed for a chance to redesign the city. Renowned Japanese architect Kenzo Tange is one of many allowed to rebuild the city centre. Fast forward to 2016 and Skopje is now two years delayed on the latest massive reconstruction project, “Skopje 2014”, this time not due to natural disaster but rather nationalistic pride funded by the government.

Macedonia has not let the refugee crisis slow down the already delayed project as their capital city is flooded with statues and local art to build cultural works and display history. Meanwhile, political analysts, economists, international organizations, neighbouring countries, the art community of Macedonia, and Macedonian citizens themselves have all opposed the remodelling.

Economists worry about the rising cost of the project with the latest estimate at just over € 633 million, nearly eight times the original projected cost of €80 million. To capture an aspect of the fear regarding this project, Goran Atanasovski, who runs an independent tourism website, acknowledged that the project is causing a divide amongst the people themselves and that those who support the project “have replaced their economic problems with a smile and happiness”. In a country that sports a 26% unemployment rate, focusing on art instead of economic development could prove dangerous.

There seems to be no end in sight for Skopje’s remodelling. As the government continues to grow and fund the revamping project, Skopje 2014 will soon have to change the year from its program name to accommodate for the massive delay. Depending on whom you speak with, the city plan has been labeled a waste of money at worst and courageous at best. Regardless, Macedonians around the country are watching their money fund the capital’s renovation at a time when unemployment is rampant and a migrant crisis is still prevalent.

Skopje 2014 has become synonymous with government spending, but now the project has provoked socio-political worries as the independent cultural scene has become suppressed. Even art critics have lashed out at the project given that all architects were hired for their close proximity to the FYROM government. Architects around the world were left wondering why Macedonia did not open another contest as they did in 1963 and let local and international artists showcase their talents and design ideas for the city.

Art proponents label the project as a mistake for relying on internal designers and fear that taxpayer money is being used to create art kitsch that is divisive. An already thriving art scene was present in Skopje, but those cultural organizations have been pushed to the sideline as they are unable to grab the attention of the state. Perhaps the largest concern is that the many complaints raised in debates simply fall on deaf ears. Indeed, when student protesters grouped in Skopje to voice their anger at being ignored, violence erupted.

Not funding cultural organizations is bad enough, but critics are now worried that development and opportunity was not even offered as an alternative. Redesigning Skopje was an opportunity to actively involve a hungry people waiting to be involved in their nation. Templum Publishing House journalist Nikola Gelevski says that he cannot “think of a worse cultural policy, not even in the darkest scripts of how to ruin the culture of one nation”.

Having dictated styles and serving generally as billboards for politicians’ marketing needs, the new art erected in Skopje continues to drive a wedge between the government and its citizens, while being labeled a project that is “counterfeiting a nation”. What is worse, the division has extended to the international community in Greece, as well as ethnic Albanians living in FYROM, which form a sizable population.

FYROM has had a delicate relationship with its ethnic Albanian population since the 2001 insurgency, while Greece has kept it in a political handicap over the Macedonia name dispute for generations. Art and politics can prove to be a dangerous mix as Albanians in Macedonia have made consistent requests to be represented in the historical landmarks being put up. Similarly, Greece has already claimed that Skopje’s airport, which is named after Alexander the Great, is a provocation that needs to be reprimanded. So when FYROM resurrected a giant statue glorifying the shared hero, it did not help promote healthy relations with Greece.

Regardless of how you define politics, the only certainty is that it is much more difficult to apply with success in the sensitive Balkan region. Being in the poorest and most unstable area of Europe, any project of this scale and magnitude needs to be for the benefit of a common regional goal. While the project is labeled as a mission of development, it is clearly Macedonia’s latest effort to progress the narrative of its national identity that only hinders relations with neighbouring states.

It is too late to cancel the project, but to have a 2016 characterized by meaningful progress, Macedonia will need to halt further expansion of the project until it can incorporate local artists and designers. This project could serve as a platform for citizens to make their mark on their nation and force it to be creative if it does not want to incite negativity from neighbouring Albania and Greece. It could also force Macedonia’s southern neighbours to make the next move in repairing relations.

Until then, FYROM appears to be continuing down the path of rebranding its past at the expense of its future.